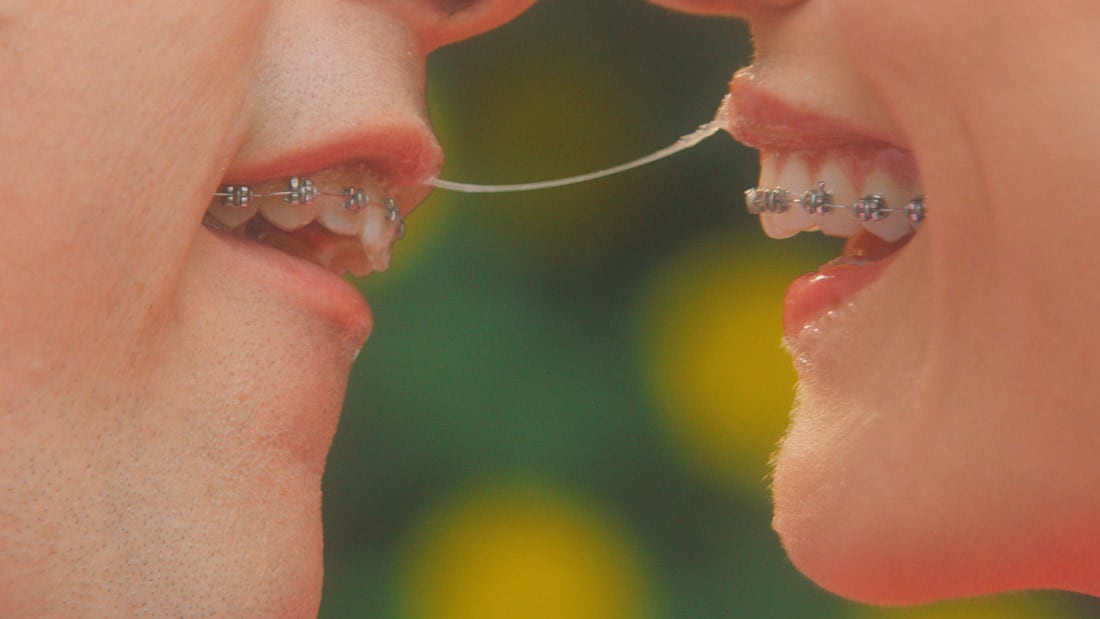 Jocelyn and Dawn bonded in a sketch comedy troupe before they decided to write, direct, and co-star in a feature film. They turned out to have a similar upbringing, and found a lot to laugh at when they began comparing their childhoods. “We wanted to explore things that we had observed growing up in suburbia,” says DeBoer, “and find out what happens when politeness is taken to an extreme.”

In Greener Grass, the outrageous behaviour goes further than one could ever imagine. Case in point: When Lisa expresses interest in Jill’s baby, “She’s sooooo cute!” Jill offers her up for the taking, like a slice of banana bread. She later realizes that she misses her daughter (awwwww), and politely asks for her back. But it’s too late—baby Madison has been renamed Paige, and Lisa won’t part with her.

From over-programmed school-aged kids, to moms obsessed with talking about yoga, there’s a lot of social commentary underneath Greener Grass. But it’s our sad means of identity formation that Jocelyn and Dawn were most interested in digging at. “People make huge life decisions based on what they think other people think they should do, or what’s expected of them, versus what they really want,” says DeBoer, who realized dark comedy was the perfect way to demonstrate the insanity of living for someone else’s approval. “What seems perfect is actually a horror story.”

The horror begins with giving away baby Madison, but things gets even weirder when Jill’s son Julian turns into a Golden Retriever. With four furry legs, Julian becomes a better soccer player and swimmer than when he was a human boy. It’s only when he begins to excel at sports (as a dog) that he finally gains his father’s approval. Woof. We’ve all been there.

While taking things to such an extreme (think Baroness Von Sketch x100), could result in a giant mess of a movie, Greener Grass is a tightly polished film that will have you quietly snickering start to finish. The wardrobe alone is reason enough to see the film (hat tip to costume designer Lauren Oppelt).

From whackadoodle outfits that pop off the screen, to Jill and Lisa both having braces, the unique touches add a dimension to the film that make it a pleasure to watch. “We wanted there to be something, so that within the first ten seconds, you know that there’s something unusual about these characters,” says Jocelyn, describing the opening scene with the two moms chatting on the soccer stand. “The reason we kept coming back to the braces is that we loved the symbolism: braces are such a mess when they are on your face, and they are so painful, yet they project the promise of future perfection.”

With all the zany plot twists, one would almost think that Jocelyn and Dawn were high while writing Greener Grass, but they were simply pulling from own experience–and taking things six steps further–to get to the darker parts of the film.

Reminiscing of her youth, Jocelyn has strong memories of the moms she watched: “I’d look at my friends moms who played tennis, and were really into the tennis outfits. I’d go over to their house and it was so different than my house. I was more in the country, but then I’d go to their homes on these cul-de-sacs, with these perfect McMansions—we were able to satirize this world, as we were so deeply entrenched in it.”

Many critics have compared Greener Grass to the style of John Waters, or David Lynch, and while Jocelyn admits that she and Dawn watched a lot of Twin Peaks while writing Greener Grass, it is a masterpiece that is very much their own, and it’s goddamn wonderful.