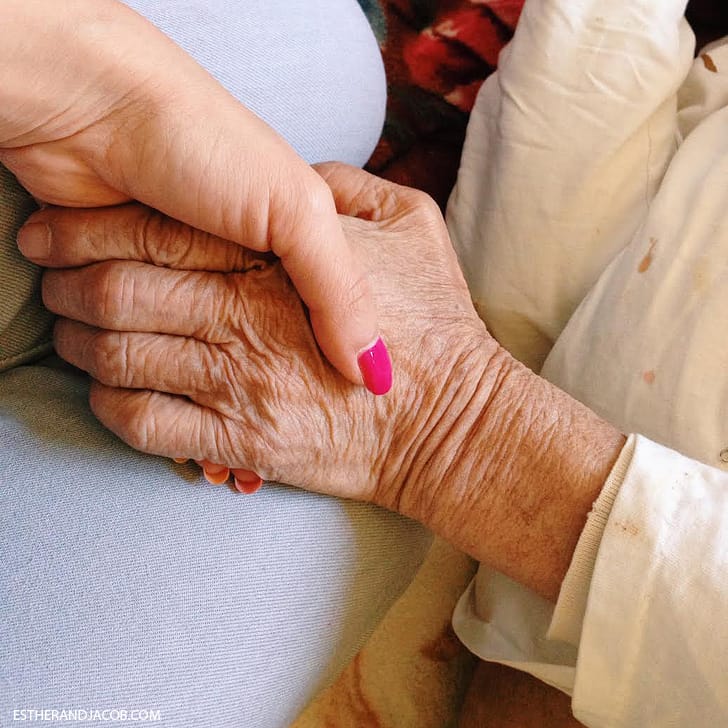 Grieving Those Still With Us

Each summer of my childhood was spent at my family cottage, but the highlight of each vacation was the week my grandmother visited. The sound of her Toyota Sedan crawling over the loose gravel of our driveway signaled the arrival of my best adult friend–the one grown-up in the family that didn’t act like a grown-up.

Grandma Kersey was the most energetic senior citizen imaginable. She was always going on hikes and canoe trips, traveling to Africa, and dreaming of climbing the Machu Picchu trail. She was funny, inappropriate and loud, with a commanding presence. She was full of naughty jokes, stories and wartime songs. She constantly wore earrings and bright red lipstick. Grandma Kersey was my childhood confidant. We understood each other. I carried a secret pride knowing how likely it was that I would grow up to be just like her.

As an adolescent, I became more self-serious. I was highly competitive, wanting to be the best student, the best child. I began to see traits in myself that I didn’t like. I was too loud, too quick-tempered, sardonic, foolish, vain, self-involved–I wanted to eradicate all these things from my personality. These were all the same traits I began to recognize as ‘undesirable’ in Grandma Kersey.

As I grew older, I saw Gran through the eyes of an nascent adult: I found her embarrassing. Her prodding made me feel self-conscious. I now thought her inappropriate stories were juvenile and ignorant. I wanted to be regarded as a lady with poise and strong character. I was ambitious, and it made me cringe to hear her pseudo-mantra–“Do the least amount of work for the most amount of pay as long as long as it’s legal and you don’t have to take it home with you at night.” I was nothing like her.

When I was in my early twenties, my grandmother offered to let me stay in her apartment. For two years, we never found our stride together. The once golden relationship had now turned grey and stagnant. It still breaks my heart remembering one day when Gran said, in a mix of hurt and anger, “What happened to us? I used to think we were close but now…”

It was time for me to move into a place downtown. I had my trepidations about leaving her–perhaps she actually needed me–but staying with her was only making our relationship worse. Having my own place, I would visit hers on Sundays, go for coffee, and sometimes take her out for a movie. But she was different now. She had been forgetting words and complained about the “fuzz” in her head.

She no longer wanted to drive the Toyota to the grocery store. She ate almost exclusively microwave dinners, avoiding the stove. She had always had a meticulous mind but more and more ‘notes to self’ would appear throughout the house. Between her resistance to wearing hearing aids and the bursting capillaries in her brain, which were causing her progression into dementia, meaningful communication had become nearly impossible.

Currently, my grandmother lives in the intensive care wing of a lovely seniors’ residence. Though I physically recognize her, she no longer knows who I am. She vacillates between mischievous sprite and cantankerous garden gnome in her expressions, but any of her endearing qualities–her generosity, her candor, her smiling–those have all but vanished into her disease.

The qualities that remain are her stubbornness, her short temper, her suspicion and her punishing looks. And admittedly, my agony is that I will not escape the destiny of my genetics. Where I recognize my grandmother most is in my suppressed traits–I am selfish, self-involved, inappropriate, loud, ballsy, aggressive, stubborn, and vain. I bitterly laugh knowing that she won and, in the end, got the better of me.

I wish, in the spirit of our sound bite psychology culture, I could just ‘say it/name it/forgive it’. But I can’t. I can’t forgive myself for losing that time with her and I cannot forgive her for making it so difficult to be around.

Each time I receive a “Can I call you?” text from my mother, I am certain that Gran has died. It certainly feels as though she is gone. And yet every time I lose my patience or utter a curse, I know that, whether I can come to terms with it or not, she is with me.