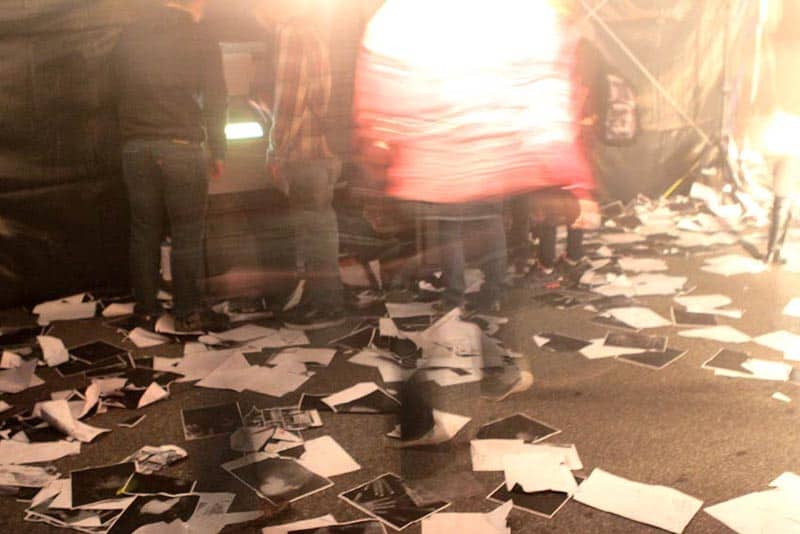 Nuit Blanche is quickly becoming my favourite annual celebration. It’s basically the new New Year’s Eve: you’ve got to make solid plans or you’ll end up wandering around Yonge & Dundas Square alone, surrounded by drunks with no one to kiss at sunrise. But, done properly, it could be the most magical night of the year! Toronto’s Nuit Blanche 2013 starts this Saturday, Oct. 5 at 6:51 pm. The event runs all night long and opens the city up for exploration and appreciation of art and performance.

The city is split into zones (‘Off to a Flying Start’ – Downtown Central, ‘PARADE’ – University Avenue / Queen’s Park, and ‘Romancing the Anthropocene’ – Downtown South/West). There are also independent exhibits as far as Parkdale and St. Clair West. If you plan to use TTC you can buy a special Nuit Blanche pass that is valid from the start of service on Saturday, October 5 until 9 am on Sunday, October 6. It costs $10.75 and is good up to six people (two adults and four children).

There are over a hundred different projects to experience, so we’ve compiled a list of some of our faves to help you plan your Saturday night!

Off to a Flying Start (Downtown Central)

Yong Jiu, literally translated as “forever”, is the foremost bicycle brand in China; Ai re-interprets such everyday found objects in an abstract and symbolic way.”

“Two driverless cars are set to loop at the same speed. As their trajectory produces a figure-eight loop, the two cars risk brushing against each other, constantly threatening to collide. Through a playful action and a cynical tone, the artist manages to loop – in an absurd, daft manner – one of the most straightforward symbols of wealth and power.”

“Take a Load Off skips between found-object art construction and that deflated armchair from the dumpster behind your apartment building. Pieces are spliced together to form a living room that stretches around corners and hunkers down inside shipping bays. Cozy and surreal, this landscape encourages you to snuggle up and stay a while, rest your feet and mingle. Enjoy the slippage between interior and exposed spaces, between the familiar and the strange. As you sink into the groove of the cushions, discover the quiet stories worn into these objects.”

“Have you ever found yourself wondering, “Is this art”? A display of ladders in the hardware store window? A painting of a dinosaur? That rave down the street? What about grandma? If it is art, how much of an art is it?

For one night only, the artists are here to help you question these questions. Please call 1-855-IS IT ART to speak with one of the highly trained advisors. Let them help you through the night.

Call toll free from anywhere, or visit Toronto City Hall to watch this service being streamed live from the VSVSVS call centre headquarters.”

“In a stationary parade, people flow around the floats, engaging them as they pass by, but in this case the movement of the crowd replaces the usual movement of the floats.  In and of itself,PARALLAX has no motion and is a stationary light fixture, but it becomes a shifting object when the observer travels down its length. The visual experience changes as a person walks down the length of the float and the light apertures morph in size, creating the illusion of a glittering wall of light.”

“This project offers a sanctuary of non-spectacle and non-sound from sunset to sunrise.

Come join the HOW TO SEE IN THE DARK activist protest march which doesn’t move and doesn’t make a sound, in the fight against the total destruction of our Earth’s dark and sinisterly quiet nights. The manifesto explains why it’s so crucial to save the darkness, and how we can go about it –a darkness that has been nearly destroyed by our superstition and our science.”

“A multi-media construction-come-depot, the float featuring balloons, custom inflatables, flagging tape, tyvek, helium, air, bubbles, and sound and light will be slowly stripped of its balloons throughout the night. Along the parade route, clowns equipped with specialized tools, gadgets and costumes, entertain through social commentary and by awarding clown paraphernalia, prizes, and ‘lantern’ balloons to the lucky and the brave. Depending on the hour you may meet a happy, sad, greedy, goofy or slightly nasty clown. Some onlookers will even be drawn in and ‘clownified’.”

“This project aims to capture the ephemeral aspect of the parade within an interactive artifact: a polyhedral sphere with animated colours and images projected onto its surface. The audience actively participates in the creative process; the composition, density and rhythm of changes to the projections are defined by social engagement.”

“‘Ferris Wheel’ returns to the simplest roots of the spectacle to explore how a homespun midway attraction can convey a sense of magic and celebration. The artist conceived the biggest welded steel formation she could physically manage herself in the backyard. Decorated with LED lights and multi-coloured wire, two 15-foot tall spinning rings turn freely in the wind. The large circles, which move in opposite directions, create dynamic lighting effects in endless variation. The whirligig does not accommodate passengers but is instead an exploration of colour in motion. Easily dismantled and moved in a 12-foot cube van, the nomadic sculpture echoes the travelling sideshow.”

“Night Shift is a durational performance inspired by Le Ballet de la Nuit, a 13-hour court ballet that was most notable for the involvement of the young Louis XIV, who performed many roles, including the title of the Sun King. Danced throughout the night, the ballet acted as a performance with night (darkness) cast as a metaphoric plague on society. The dance is performed as an offering to call upon daylight, when the Sun King exiles the darkness, and the dawn (light) signifies a new beginning through the start of a new day.”

“The project is a 35mm film installation shot at the CFS ALERT Signals Intelligence Station on Ellesmere Island, Nunavut, the northernmost settlement on earth. Developed while Stankievech was an artist in residence with the Canadian Forces, this work is part of an ongoing series of “fieldworks” looking at remote outpost architecture, military infrastructure and the embedded landscape.”

“Kelly Richardson’s Mariner 9 is a life-size, 12-metre-long panoramic view of a Martian landscape set hundreds of years in the future, littered with the rusting remains of various missions to the planet. Despite its suggested state of abandonment, several spacecraft continue to partially function and do their intended jobs, seeking signs of life, transmitting the data back to no one.”

“The Everything Company will construct a large-scale cedar smoking hut powered by three bicycles. The artists will invite participants to pedal throughout the night to keep the salmon smoking, ultimately serving the smoked fish.”

“This tactile installation relies on user interaction to grow organically. Each user contributes to the evolution of the Light_Scape, by altering the appearance of the surface. The Light_Scape consists of individual, easy to handle cubes, each containing a tri-colour LED that cycle through a spectrum of colour. The modular shape of the light cubes allows the user to freely explore limitless configurations and patterns. The cubes and subsurface are covered with Velcro, giving them the strength to defy gravity. The Velcro’s fuzzy texture diffuses light and produces a soft pulsing glow, which when accumulated, creates the illusion of a living organism.”

In this interactive installation, you make the art. You will choose a favourite song to sing into a karaoke machine. The karaoke machine, connected to a flame tube, or Ruben’s Tube, will allow the fire to dance to your voice.
Artscape Wychwood Barns – 601 Christie Street

“One hundred regional beekeepers dressed in their bee-suits will participate in a massive collective meditation.

The performance will consider the relationship of temper to weather. The beekeepers will silently meditate on notions of “good weather” for the bees and for all of us, attempting to transform environmental conditions with their minds.”

Strange Science/City Symphonies – Silent Films with LIVE Instrumental Accompaniment – Shane Smith, Aliza Ma
TIFF Bell Lightbox, 350 King Street West (This project will be in Cinema 3, located on the 2nd Floor 2:00am to 7:00am)

“A compelling night of silent films with live piano accompaniment. Each of the films will be accompanied by a highly talented Toronto musician, who will perform an improvised live score on piano. The connection between cinema and music is foregrounded, as the musicians’ performances transport the audience back to the golden age of silent cinema.”

Take a gander at the Nuit Blanche website for more information on the 110+ installations and events happening this Saturday… it comes but once a year, so let’s celebrate!