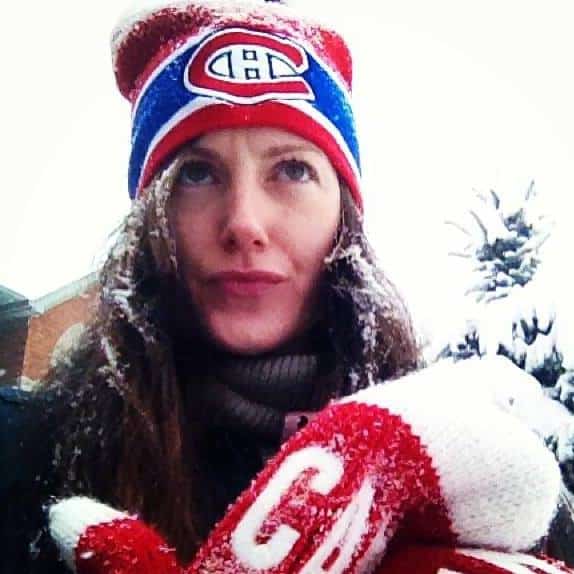 Being a Habs Fan in Toronto: What Hockey Means to Me (and My Dad)

I was born in Toronto. I like Toronto. While traveling abroad, I proudly say, “I’m from Toronto.” But when the Toronto Maple Leafs matched up against the Montreal Canadiens last week to open the latest NHL season, I gotta tell you, Toronto, I was cheering for the Habs. I was happy they won, and you can thank (or hate?) my dad for that.

I’m pretty sure my father always wanted a son to follow in his footsteps playing his favourite sport: hockey. For him, hockey wasn’t just a hobby; it was a way of life. Passing on hockey wisdom from father to son was a rite of passage for many Canadian families and my dad wanted to uphold that age-old tradition, like his dad did and his dad’s dad did, and maybe like his dad’s dad’s dad did (you know, if they had the time to play hockey during those very busy Enlightenment years).

However, my dad’s firstborn was me, a daughter. I am also his only child. While growing up, I took ballet lessons, horseback riding lessons, acting lessons, more dance lessons, singing lessons. Even though he never said it, I knew this devastated my dad. Not only was his only child a girl, but she was très feminine; instead of buying manly knee pads or rugged shoulder pads, he was buying dainty ballet slippers and cute, little pink tutus.

Realizing that I would never play on a hockey team (or any other kind of team for that matter), my dad did the next best thing: he taught me about hockey.

My dad’s from Newfoundland, which makes him an instant Habs fan (it’s just how it works out East. You grow up eating poutine/donairs/fish and brewis, you’re a Habs fan). And just as I inherited my dad’s green eyes and knobby knees, I also inherited his Habs fandom and a penchant for hockey (a.k.a. I was given no choice in the matter).

I was six years old when my dad began teaching me Hockey 101. The first step of my crash course (which would become literal whenever we visited the local pond for a scrimmage) was purchasing me a pair of skates. When we arrived at the skating goods store, I gravitated towards the delicate, shiny, white skates; skates that I recognized being worn by the beautiful, tiny female skaters in the Olympics as they glided like flowing ballerinas on the ice.

My dad looked at the rows of white skates repulsively, rolled his eyes, and shook his head. “Those aren’t real skates,” he said.

“But I want them and they’re so pretty!”

“Skates aren’t supposed to be pretty,” my dad said gruffly before he quickly took my hand, whisking me away from everything frilly and feminine in that store.

The next aisle we came to was packed with boys, around the same age as me, and their fathers. The boys were trying on bulky hockey equipment that weighed twice as much as they did, forcing them to constantly teeter back and forth like a seesaw, as their dads conversed with each other about last night’s “big Leafs-Canadiens” game, ignoring their sons as they fell to the ground one-by-one like bowling pins.

I was confused as to why my dad had brought me there—was he lost? I was swiftly placed on a bench and my pink boots were replaced with hulking black skates. I was horrified. These skates were definitely not pretty. I was even more mortified when one of the boys said aloud, “Why is that girl wearing boy skates?”

I told my dad I didn’t want boy skates; I wanted girl skates. My dad answered matter-of-factly that they weren’t boy skates; they were hockey skates and I was getting them whether I liked it or not.

After my dad had purchased my new monstrosities, we drove to one of the local frozen ponds where I would receive a basic introduction to skating in hockey skates, meaning there would be no Josee Chouinard toe-picking for me. I would learn how to skate by pushing out with one leg and then out with the other in smooth, repetitious movements. Much easier said than done.

My dad, however, made it look like it was as easy as riding a bike (though at six years old, I hadn’t quite mastered that either). Every time I attempted to just stand on the ice, my knees would buckle, causing my legs to stretch wide around me à la Bambi. It was at this horribly uncomfortable moment when I realized my dad must have been born with skates on; he probably learned how to skate before learning how to walk.

Watching hockey with my dad used to be much simpler. I would sit on his knee and listen to him shout either profanities at a “blind, doesn’t know what he’s doing” referee or “Scores!” after every goal. Since my enrollment in Hockey 101, watching a hockey game over the years had become much more complicated; I actually had to understand the game.

“Now, did you see how that player in the blue bumped into the red player with his shoulder?”

“That’s called a body-check. You can only use your shoulders and hips to block your opponent who has the puck or the last person who had it. Understand?”

After all these years, I have a confession to make: I still don’t understand all the plays. Once or twice a year, I go to hockey games with my dad and sometimes I don’t have a goddamn clue to what’s going on, but I have enough of an idea (penalty box: bad; goal: good) to appreciate the game, which I think is all we need.

Hockey is how my dad and I bond; it’s how we communicate, it’s how we stay in touch. When I moved to Italy at eighteen, the year that Canada reclaimed gold at the 2002 Winter Olympics, I felt his presence four thousand miles away watching the game, calling out the plays, swearing, and cheering right along with me.

When I lived in New York, we would catch up on the Rangers (and, of course, the Habs). I would fill him on the games I watched at Madison Square Garden, admitting, that, yes, I did cheer for the Rangers, but only because New Yorkers are scary, and, no, the Canadiens weren’t playing.

And during the Habs’ epic run last season, every game either became gloating, jersey-wearing, live-watching sessions at my parents’ house, or giddy, live-texting “OMG! FUCK YEAH! Did you see that?!” sessions…until the Habs’ heart-breaking loss.

Now that I’ve moved back home, and hockey season has started, our convos have returned to the sport, revolving around last night’s game and how shitty the Leafs are doing, and it feels good.

My dad and I are not full-on Baruchel when it comes to our love for the Habs, but we are known to cheer for the opposing side at a Leafs game (and, yes, we do that even when the Canadiens aren’t playing). But please don’t hate us too much, Leafs fans.

I’m sure you realize the sense of unity that only hockey can bring to Canada; that it’s almost like a natural instinct, or as in my case, an inherited trait. It is a sport that not only can bring a nation together; it also can bring together a father and his daughter.

Hockey really is our game; mine and my dad’s.