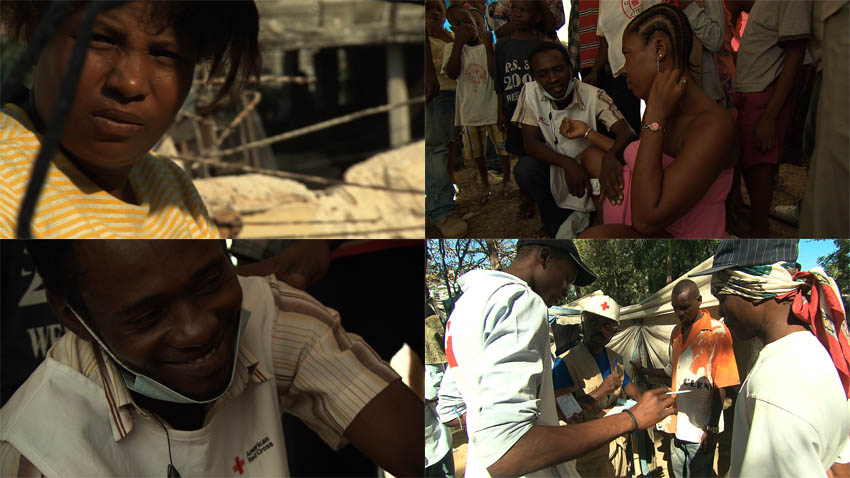 Haiti: What was it like on the ground? An interview with Nadine Pequenza, director of TVO doc Inside Disaster Relief Haiti

A year has gone by since the devastating earthquake in Haiti, and still, so many questions are unanswered, relief is still desperately needed, and millions of Haitians are still displaced.

Inside Disaster Relief Haiti is a three-part documentary series that gives a thorough overview of the disaster, following both local Haitians and also a team of Red Cross relief workers.

Director Nadine Pequenza set out to make a documentary that would show how chaotic and logistically challenging NGO relief work really is. It was an idea that came to her in the wake of the 2005 tsunami in Thailand, and in 2007 Pequenza began to have meetings with Red Cross leaders. By 2009, she had formed close relationships. Like everyone, the news of Haiti’s earthquake came to Pequenza as a devastating shock, but it was also as an opportunity to make her documentary. She needed to work quickly. Within twelve hours she was at Pearson Airport with her team, and within 48 hours they were making the trek from Santo Domingo to Port-au-Prince.

Can you describe how you first heard about the earthquake?
I was actually coming home from grocery shopping. All my friends and family knew I was waiting for this, so I had a million texts before I even got home saying “Earthquake Haiti, are you going?” I turned on the news and it was a lot of information and very little information coming at the same time. A lot of people were tweeting, you knew the disaster was bad but there wasn’t a sense of how bad because it was at night, it was dark, and people couldn’t really see the extent of the damage.

Can you tell us about the first 24 hours?
We knew in planning for this shoot that there would likely be no communication, no electricity, we’d have to bring our own water supply, in the form of tablets, and our own food. In the situation [when the crew landed in Santa Domingo] we were just looking at our stuff and thinking, “I don’t think we will be able to carry this.” We left all of our lights behind, we actually left food behind. We had second food coming a few days later.

There are countless NGOs that do this kind of work, why focus on the Red Cross?
I chose the Red Cross because it’s the largest disaster relief organization, only second to the United Nations.They have 187 societies around the world and they call on those aids to respond in the event of a natural disaster. They have global reach and tremendous resources.

What aspects of the Red Cross interested you most?
The Field Assessment Coordination Team, a lead team that gets those into the field to decide what’s needed. That’s the assessment part, and the coordination is bringing in emergency response units,  specialized teams equipped to deal with water, sanitation, shelter, emergency relief items.

How did you choose your film subjects?
For the Red Cross team, it was fairly straightforward who your characters were going to be. Ian Heigh, the Red Cross’ logistics coordinator, because logistics was so crucial. Steve McAndrew, in charge of relief distribution, because it’s important to have someone who liaises with the community.  Hossam Eisharkawi, who heads up the Red Cross’ rapid deployment field hospital: getting the hospital set up is a natural story to follow. They really wanted to let people see and understand what a disaster relief operation needs. Usually the media concentrates on the drama of the effected population as opposed to the coordination and the challenges of trying to bring relief.

In such a chaotic environment, what were the challenges of the actual filmmaking? How quickly did you have to change your plans?
In terms of the logistics of filming, this was actually the ideal situation, because the disaster was contained, for the most part, in a capital city. It was in an urban area, that means things were localized. In the Pakistan floods, the disaster covered thousands and thousands of kilometers. In that case, the Red Cross teams split up, and they can be hundreds of kilometres away from each other. Trying to cover every aspect of a mission would have been very difficult under those circumstances.

Plans were always changing depending on emergencies that were arising, so there was a constant shift of priorities with the mission. And not within just the Red Cross, but the entire international community. The Red Cross is just one actor in this disaster response. There were hundreds of international agencies that responded and then thousands within Haiti that were active NGOs. It was pretty complicated interacting and planning a shoot day. It was the art of constantly shifting plans.

Did you ever find yourself wanting to abandon the filmmaking?  For instance, stop making a documentary and help people get out of rubble? Or try to feed them?
Not taking people out of rubble. When you have a collapsed building they are so fragile. People wanted to get in there and save, but it endangers the rest of the operation. You have a bunch of people digging and a building can collapse in a minute. Often people who are surviving are surviving in pockets.

I did want to help people. When you go into the camps and there is no food, no water – you want to help. Your instinct is to help but also the reality of the situation is….our job is to film and to help get this story out and explain why this disaster is so tremendous and catastrophic. We don’t have enough water to hand out to a camp with 50,000 people. We don’t have food to feed them. We didn’t even have the materials to be of assistance. We gave people a lift sometimes, if they had to get somewhere. Talk to them, listen to their stories. We gave water when we could afford to but you also have to be  careful when you are handing out water and there are hundreds of people around in need.

What were your initial objectives and how did they change?
The objective is two-fold. One, to make people understand the complexities and challenges of delivering a large scale relief response. And start thinking on how we can improve in our next response.

The other idea was to make people understand the extent of a disaster is really dependent on the situation of a population. How prepared they are to respond. Do they have supplies, emergency relief supplies that are stockpiled? Do they have trained people to respond? Medical people? Search and rescue? Do they have evacuation plans? Do they have temporary shelters or buildings that can be turned into shelters? All of these things impact hugely on a disaster…they don’t have access to clean drinking water in the first place. There is no real health care system, building codes are not existent. Land ownership is a huge problem. Only 5 per cent of land has title and the implication of that is that people are renting. The wealth is concentrated with a small few, so it stalls the recovery process. Haiti illustrated all of these problems that I had wanted to get at very well.

With news coverage edited down to :15 second clips and so much of our information coming through online media in the form of headlines, Inside Disaster Relief Haiti offers us a chance to gain broader perspective and, hopefully, a better understanding as to what happens when an impoverished city is stricken by disaster. It allows us to see upfront how relief workers respond to a situation and certainly forces us to ask tough questions. It’s not an easy documentary to watch but beyond the horrifying shots and heartbreaking stories the film captures and shares an extremely uplifting sentiment about the resilient nature of the human spirit, the power of a united front and the drive to help make a difference. This is important, watch it.