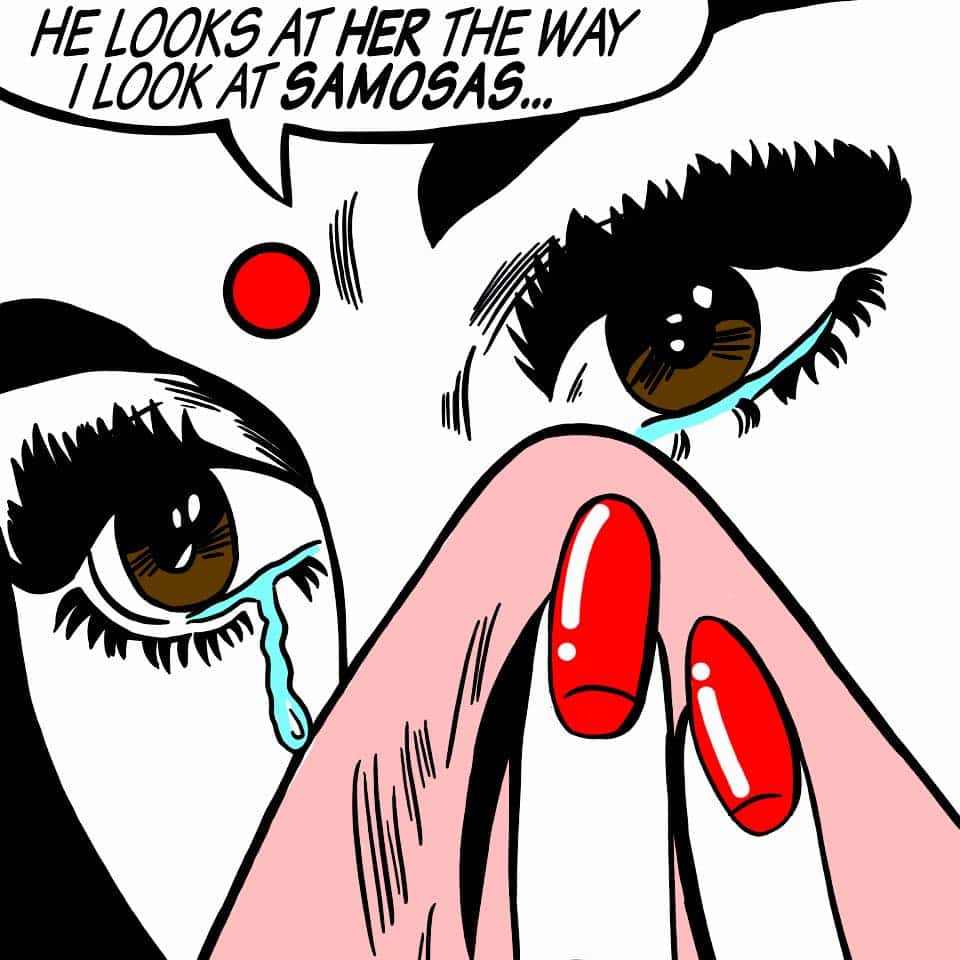 Growing up desi in Mississauga, Maria Qamar (AKA hatecopy) straddled two opposing worlds – traditional South Asian heritage and secular North American culture. This push-pull is woven throughout her work, and her vivid Lichtenstein-inspired pop art pieces reference her own experiences.

After being laid off from an ad agency last year, she began (on a lark) to post her artwork to Instagram. Seventy-four thousand followers later, she’s become a lightening rod for the desi diaspora and counts actress Mindy Kaling as one of her clients. Her new show, Bad Beti, a collaboration with Babneeet Lakhesar (AKA Babbuthepainter) opens tonight. 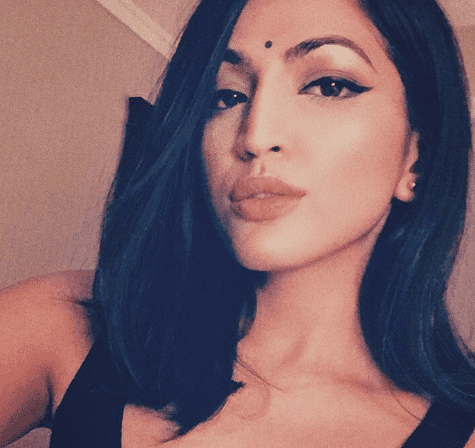 SDTC: Can you walk me through your process of collaborating with Babbu?

MQ: It starts with an initial sketch, then it goes onto canvas or digital, depending on how much time I have, whether it’s a commissioned piece, or whatever. It all starts with a sketch. When it’s a collaboration, normally I start off the piece and Babbu takes it halfway from there. My specialty is line work and hers is detailing. Because our work is so different, it adds a different twist when it comes together. My work is very flat, very graphic, very 2-D. No shading. Very pop art. Her major is sculpture, so she’s very 3-D. It’s dimensional, it moves, it has texture, no straight lines. She adds a layer of that to her work. We have pieces where you’ll see a pop art image and when you look closer it’s actually coming out of the canvas – texture and peaks.

We love doing shows together because we’re close friends, we collaborate really well, we bounce ideas off of each other. When coming up with ideas, we’re always talking about who we are, where we’re going as a diaspora, what’s constantly changing in our culture here. When we sense a pattern, we go, “OK, this could go into a show.”

How did the concept for Bad Beti come about?

We started talking about how all of these brown people, all the desi kids, went through this emo/punk phase. But when you hear the word ‘punk’ you don’t think of a brown kid. It’s funny because we all grew up listening to the same shit – Slipknot, Metallica, Disturbed and Korn. I’ve seen Iron Maiden live with Alice in Chains. This is music I also enjoy, but you never think about that. I don’t know what it is, but the culture that existed didn’t allow for brown people to own that space. It was really strange to us, and equally hilarious: just picturing a brown goth kid.

But it was also linked to depression and trauma; that was the music and the culture we gravitated to because it was the only thing that sort of understood that dark side of what we were going through. And that’s serious – when all of these kids couldn’t grasp onto one identity. We were going between a tradition and being here. Bad Beti is exploring that punk/goth phase we all went through. And how we’re sort of embracing that now. All of these things that were considered bad, that we weren’t allowed to talk about – we’re talking about it now.

We created this visual representation of what that is in a leather linga. We got Babbu’s mom to sew a linga out of leather and we studded it like a crust punk jacket – with spikes and studs, safety pins. We have patches and all of these other elements that are normally in western punk clothing, but it’s to demonstrate that an Indian community was also a part of that. We were there, but just went completely unnoticed. 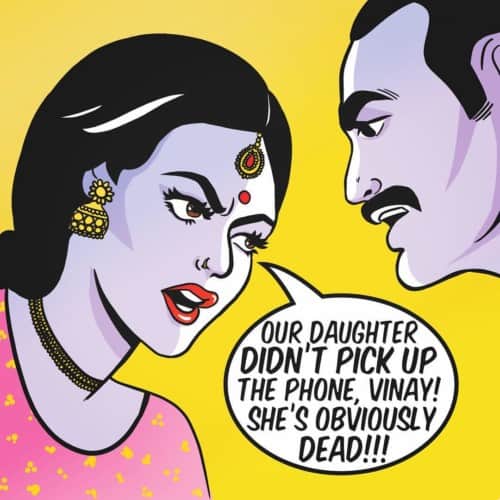 Have any reactions to your work surprised you?

Every time somebody shares it, it surprises me. Everything that I create – I genuinely don’t know if anybody else can relate to it, because I’m always drawing things that I’ve encountered. Let’s say the post where the woman is yelling at the man like, “Our daughter hasn’t picked up the phone…she’s obviously dead!” – that got like, 10,000 likes. I was like, what the hell? I didn’t know it was that common. I actually had the cops called on me one time because I skipped class to go buy the new Sims game at the mall. A bunch of cops hunted me down like, “Are you Maria Quamar?” I was like, yes. They said, “Your parents called us and you have to come home now.” That’s mad embarrassing.

A piece I’m working on, called Kya?! It’s a girl with a half-shaved head, casually holding a cigarette in her mouth, and just looking back at the audience like “what?” (Kya means what.) This piece is eight-feet tall, bright red, really in-your-face. I’m in love with it just because the size of it. I like the content of it. I love working with paint. If I could paint all day, every day, I would. The paintings are different from what you see on Instagram, but it feels like you’re physically walking into my Instagram. Not a lot of words, more images and expressions. It exudes a feeling without saying too much. 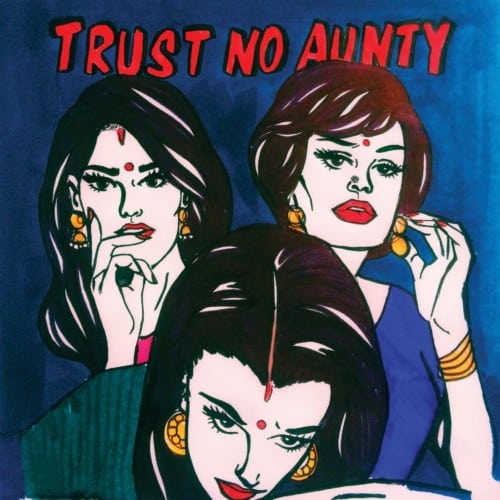 It has always been the Trust No Aunty piece that I made when I was chilling on my bed last year. It communicates a general “I fucking give up.” Like, stop telling me what to do. It’s another way to say ignore the haters. The biggest hater is going to be the person that tells you all the things that are not good about you, those things are normally going to be said by aunties and uncles – people that don’t need to give their opinion.

How is the art world similar to the advertising world?

It depends on what kind of art it is. For me, the entire purpose of my work is to be shared and passed around. In that sense, it’s similar to advertising because there is a certain level of strategy that goes behind it. Not in creating it, but in pushing it. It has to be very methodical. When I make the work, I don’t make it thinking it’s going to be relatable, or that people are going to share it, because I want all the work to be genuine and come from me. But once it is made – because I used to work in advertising – the way I push it is pretty strategic (i.e., what’s the timing like, is this piece good to go right now, how will people react, is this the right platform to put it out). 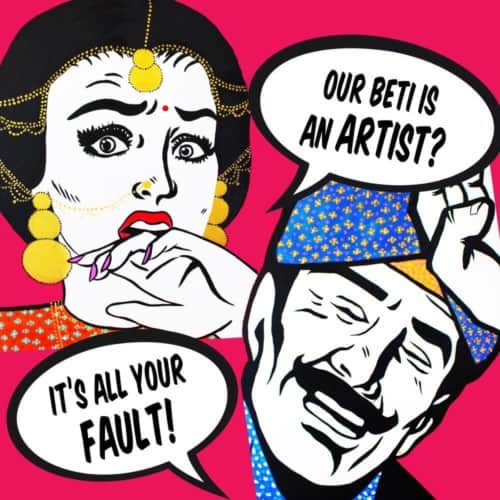 What have you learned through this process?

I’m 100 per cent responsible for my own actions. When you’re working for a big corporation or company, you represent that thing, you become a part of that thing, you don’t really matter, you’re just a number. So you can get away with watching YouTube videos all day or falling asleep at your desk or taking two-hour lunches. You can get away with these things because, fuck it, it’s not your company. When you’re working for yourself – anything that comes out of your mouth, or your effort – you have to be very aware of what’s happening. You can’t get away with being an employee. I have to put on all sorts of hats to make this machine work. And that machine is me. And the thing that’s making it work right now is coffee (I haven’t slept in three days).