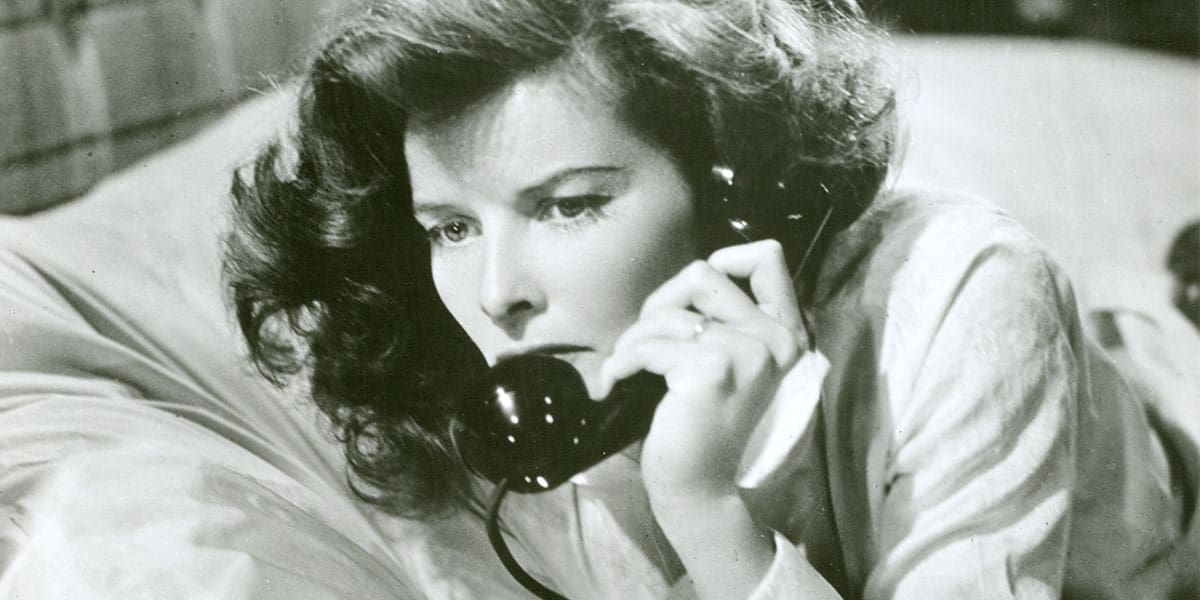 Fearless: The Films of Katharine Hepburn Highlights an Icon Who Shattered the Mould

Katharine Hepburn was a staunch feminist and rule-breaker: she dared to wear pants in public at a time when doing so could have gotten her arrested. Over her career, she took on roles “with substance and grit: iron-willed women with grace, intellect, and an irrepressible vitality,” writes Amanda Brason, TIFF Cinematheque’s curator of Fearless: The Films of Katharine Hepburn. This retrospective, running at TIFF Bell Lightbox until the end of April, honours the legacy of an icon who ceaselessly challenged Hollywood’s prescriptive gender roles and helped define the mid-century idea of the “modern woman”.

We chatted with Brason to find out more. 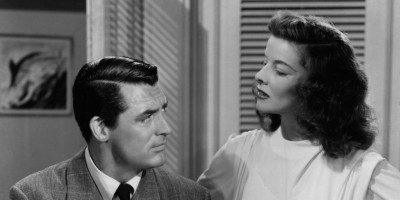 SDTC: What draws you to the work of Katharine Hepburn?

AB: When I first began researching and preparing for this retrospective, Fearless: The Films of Katharine Hepburn, I knew Hepburn as the wise-cracking starlet who stole the show in a handful of beloved films from my youth, but mainly I knew her as the woman who broke the mould by wearing pants. If I’m being completely honest, I don’t think I ever truly appreciated the radicality of that choice and how that decision would distinguish her from other actors of the era.

Women in the 1930s, and especially young Hollywood ingénues, did not wear pants. In fact, the act could get you arrested for “masquerading as a man”. So Hepburn’s startling choice to don trousers was, at the time, an implicit act of rebellion and one that drew both the ire and admiration of an unfamiliar public. Over time, Hepburn’s personal wardrobe of precise tailoring and simple, angular beauty would fuse with and become symbolic of the kinds of roles she would inhabit on screen: frank, sophisticated women who offered a template for modern womanhood at a time when gender roles were restricted to one-dimensional expressions. In many ways, Hepburn, along with Greta Garbo and Marlene Dietrich, would expand and challenge the concept of the feminine and come to embody the spirit of strength and independence that attracted so many to her films when they were first released, and draws me to them now. 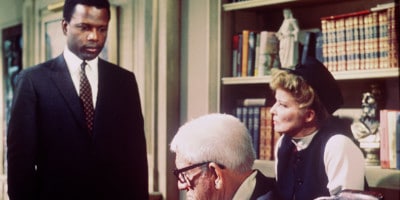 Are there any performances in particular that stand out for you?

A key performance in Katharine Hepburn’s filmography is a sadly underappreciated Depression-era classic by the name of Stage Door (1937). Set in a boarding house for Broadway hopefuls as they audition and wait for their big break, Hepburn plays Terry, a newly arrived rich girl whose cool demeanour and upper-class education puts her at odds with the hardscrabble work ethic of the other girls. Ginger Rogers gets top-billing as Hepburn’s foil, and future TV stars Eve Arden and Lucille Ball round out the ensemble cast with amazingly raw comedic talent, but what makes Stage Door so truly thrilling is that the cast is almost entirely made up of women. In fact, the only male character of any substance is that of a lecherous producer who uses his influence to seduce the young starlets in a scene that involves a literal casting couch, a chilling parallel to our own times.

On top of the film’s focus, which so poignantly foregrounds female experience, what makes this a standout performance in Hepburn’s career is found within the film’s climactic finale. Hepburn’s character is performing in a play after just hearing of a fellow boarder’s death and delivers the line with newfound significance, “The calla lilies are in bloom again. Such a strange flower, suitable for any occasion” (a direct reference to her own Broadway career prior to the film), and connects symbolically that as actors, their position in the world is one of precarity, who are at the mercy of predatory gatekeepers and whose value is directly connected with their youth and sexuality. Providing surprising depth and meaningful subtext, Stage Door offers a compelling portrait of working women in the 1930s and a knockout performance by Hepburn. 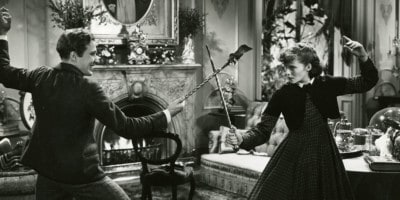 What are the most outstanding examples of Katharine Hepburn challenging gender roles throughout her career?

Having been raised by a suffragette and a doctor who advocated for the equality of the sexes, Hepburn’s early childhood certainly had prepared her for the career in Hollywood that would hold her up as a template upon which modern womanhood would be modelled; however, there are two shining examples in her career that directly challenge and critique the roles that women were allowed to inhabit: Woman of the Year (1942) and Adam’s Rib (1949).

The narrative axes in both films revolve on a shared point of women and men clashing in the workplace. The central fight? That women should occupy that space at all. While both films share similar philosophical foundations, Woman of the Year offers the most compelling account of the challenges and compromises that women face when succeeding in their career as Hepburn stars opposite long-time co-star and rumoured lover Spencer Tracy as sparring journalists whose repartee turns to romance. Hepburn’s Tess Harding is supremely sophisticated and highly accomplished, which endears her to Tracy’s character during courtship but becomes a liability once they enter into marriage as questions of motherhood, domestic roles, and work commitments threaten to collapse the partnership. Though the film ends on a complicated note, it remains one of the best examples, alongside its narrative twin Adam’s Rib, as exemplary of the roles that Hepburn would inhabit and shine in, while offering nuanced critiques of the career limits that women would face in the public sphere.

What did you learn about her that surprised you when you were putting this retrospective together?

In putting together this series, I knew Hepburn through various iconic roles that created her star persona: the prim missionary in The African Queen (1951), the bombastic socialite in Bringing Up Baby (1938), and of course cinema’s earliest surviving and perhaps most indelible evocation of Louisa May Alcott’s forever heroine Jo in Little Women (1933). But what surprised me most was that it almost didn’t happen.

A defining moment in Hepburn’s career came after a setback following the production of The Lake, a play that garnered the star dismal reviews and sunk her reputation further after a string of unpopular films. This earned her a place on the 1938 exhibitors poll, which labelled various stars of the era as box office poison (alongside Joan Crawford, Marlene Dietrich, and Mae West—not bad company). With her career at an all-time low, Hepburn decamped for New York and set to work on the play The Philadelphia Story, which was so incredibly successful, Hepburn was able to use it as a bargaining chip when she brought the story to MGM to make it into a film. Masterminding her own career comeback was further cemented by a canny decision by the star to also purchase rights to the original story, thereby securing her seat at the table and earning her bargaining power at a time when this was not the standard for women in Hollywood. The film The Philadelphia Story, like it’s predecessor, was a massive hit on its release and reinstated the star as a key Hollywood power broker.

What do you think she was like as a person?

Having recently read her autobiography, the aptly titled Me, as well as her now infamous memoir, The Making of The African Queen: Or How I Went to Africa (a truly rare read if you can find it), I can tell you that Katharine Hepburn was one staunch character. The voice that narrates both accounts is forthright, witty, self-effacing, and at times demure when she veers too close to long-guarded personal stories, but throughout the consistent tone is one of striking independence and crackling wit. Overall, you can tell that she is an intensely private person, which was in keeping with how she presented herself publicly. Without much to go on, the press would inevitably speculate on the details. The largest rumour involved a romantic entanglement with her longtime (and married) co-star Spencer Tracy. It was only revealed by Hepburn after he died that the pair kept a twenty-six-year-long affair hidden. Other rumours would circle the star as well, namely that she was gay, which likely sprang from the fiercely independent women she would play on screen (a sexist and homophobic correlation that equated strong women with sexual “deviance”) and was further bolstered by her then unusual fashion choices. In 2019 we can take for granted non-conforming gender expressions as the norm, but in the middle of the last century, it was not. What do I think Katharine Hepburn was like as a person? I think she was ahead of her time.

What can we learn from her example?

The example that Hepburn’s legacy offers to contemporary audiences is one that hasn’t changed much since the heyday of her stardom, that being authentic and boldly independent offers those who are women-identified the space to centre that experience, when it might otherwise be diminished and marginalized. Unapologetically opinionated, fiercely self-determined, Hepburn’s career in Hollywood lasted sixty-six years and garnered her four Oscars for Best Acting, which has yet to be bested by any actor male or female. The longevity of her legendary career owes much to her talents as an actor and the strength of the roles she would play on screen, but more than that because she came to represent possibility, that iron-willed, boldly intellectual women could hold their own in the workplace and with men who had previously dominated those spaces. In short, she became an icon.