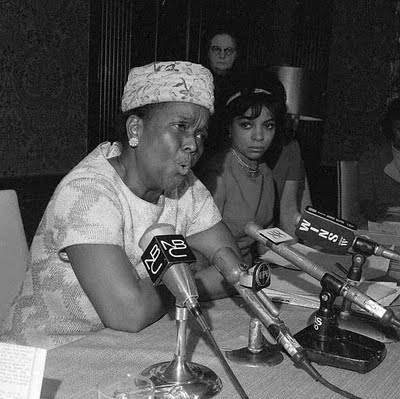 Why We Should Care: Ella Baker was a prominent figure in the Civil Rights Movement, the NAACP, the Nonviolent Student Movement, and the Black Power movement of the 1960s and onward. Baker was the highest ranked woman in the NAACP during her involvement. She was a strong advocate of “participatory democracy” in many of the movements and organizations with which she worked—it’s a tactic still in use today by many movements and activist campaigns, including Occupy Wall Street and the Occupation of Tahrir Square.

Three Things We Admire: Baker’s commitment to decentralized movements and her belief in individual and collective power, her passion for freedom and equality, and her outspokenness that paved the way for the words and work of many women of colour to be heard, seen, and appreciated.

In Her Own Words: “You didn’t see me on television, you didn’t see news stories about me. The kind of role that I tried to play was to pick up pieces or put together pieces out of which I hoped organization might come. My theory is, strong people don’t need strong leaders.”

In Her Biopic We’d Cast: Known for her roles in Tyler Perry films, we feel Kimberly Elise would bring a certain fire to the role of Ella Baker, as she’s brought that fierceness to much of her emotionally-charged and raw performances in her previous work.

Welcome back, Her Story! You may remember this popular series from years ago—we missed it, so we decided to revitalize it! Join us as we discover some of the most interesting, inspiring, and influential women in history.