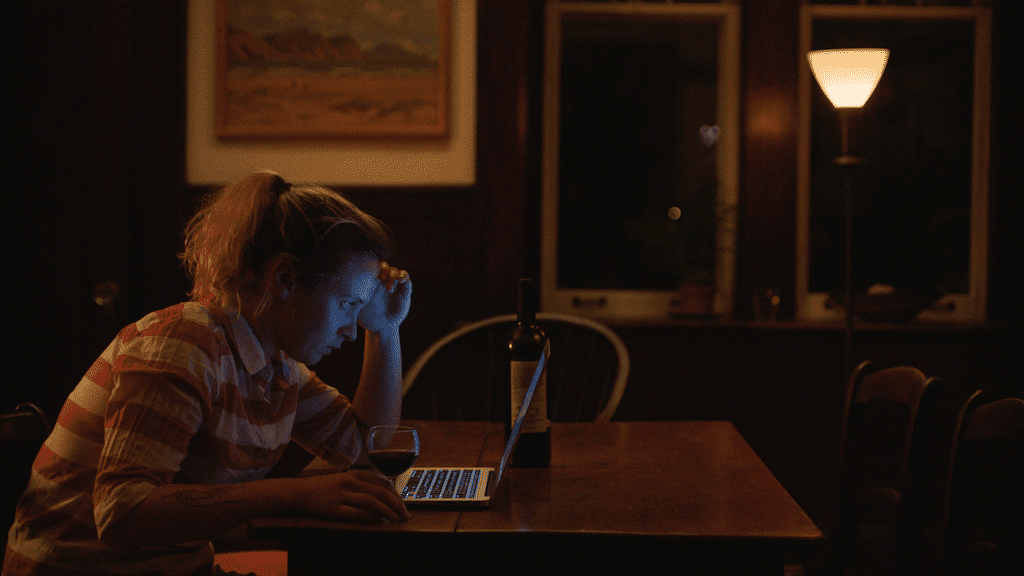 "It is my hope that, by making this film, I can shed some light on how a person might transition between a place of relative mental stability to a place of crisis."
Film  Recovery

Rebeccah Love’s tense drama Parlour Palm is incredibly relatable, and not just for those who suffer Bipolar Disorder.

In this stunning short film, a woman descends into a climate-change-anxiety fuelled manic episode, and we watch as both her and her husband try to manage the alarming behaviour.

From record-breaking temperatures to devastating forest fires, we understand firsthand how distressing news headlines can spike anxiety, but Rebeccah’s film does a superb job at showing how anxiety shows up differently for those living with Bipolar Disorder.

Exquisitely performed by Sarah Swire and Tyson Coady, with noteworthy art direction and music, Parlour Palm is a 23-minute film that leaves a lasting impact.

We connected with Rebeccah to find out how her lived experience with mental illness inspired the film, and why it was so important for her to make. Her responses are full of wisdom.

What compelled you to make this film? Or perhaps the initial inspiration?

Between the ages of 18 and 21 I suffered from pretty extreme manic episodes and psychosis. It was a frightening time for me and the people around me. I found that both during my crisis and during my recoveries there was absolutely no public conversation about Bipolar Disorder, psychosis, or delusions of grandeur. This meant that for years I felt so scared and alone, and there were very few people I could speak with about my experiences. Today, there is still very little public conversation about these things: people are afraid to talk about this condition, and there is a great deal of misinformation about what it means to live with Bipolar. People who go through these terrifying symptoms are often left feeling extremely alone and disempowered.

It is my hope that, by making this film, I can shed some light on how a person might transition between a place of relative mental stability to a place of crisis. The narrative formation of the crisis can almost be tracked moment by moment. In my experiences with my illness, the root of the madness was always intellectual: it stemmed from some very complex idea that my mind was unable to grapple with. Parlour Palm is a story that makes use of theatrical conventions in order to shine a spotlight on some of these big ideas: our main character is trying to sort through some very confusing thoughts around motherhood, capitalism and climate change.

It is also my hope that by watching her story, the public might be able to better empathize with someone in her shoes by observing a mania that is, in many ways, an understandable reaction to extremely complicated thoughts: how are we all not going mad when faced with the moral crises of modern day living? A common thought that I live with is that if you’re not going mad, you’re not paying close enough attention.

I also wanted to shed some light on the challenges of caregiving: it is not an easy task, taking care of a person who is unwell. Again, I see this as a conversation that is not spoken about enough in public discourse.

Watching it now, how does your film make you feel?

What was a lesson you learned while making your short? Or a discovery (self or otherwise) that struck you?

Our actors Sarah Swire and Tyson Coady improvised the dialogue overtop a rough script, and our cinematographer Nikolay Michaylov brought forward some incredibly creative cinematographic solutions to some of our shooting questions. In this film I learned that creative leadership has a lot to do with listening to other people’s ideas and allowing lots of space for collaboration. This film is as much theirs as it is mine!

As a filmmaker I’m fascinated by the intersection of theatre and film. The works of Charlie Kaufman, Guy Maddin and Jean-Marc Vallée have always stuck with me.

Marcel Dzama deals with this intersection in his paintings, and I’m very very curious about William Kurelek’s life story, that involves a great struggle with mental illness. I love to think about painters who lived alone in the woods or in modest little cabins, like Maude Lewis. I spend a lot of time daydreaming about the Impressionist painters and their depictions of little-p paradise, but I’ve also gone through phases where all I want to think about is Toulouse Lautrec’s depictions of female sensuality. Laura Dawe is the greatest Canadian painter working today, I should probably mention her name too.

I have a real soft spot for artists who share my disease, Virginia Woolf, Kanye West: their output inspires me and makes me feel so much less alone.

Parlour Palm will premiere at the 8th annual Future of Film Showcase, and is available to stream for free across Canada on the CBC Gem streaming service from July 9 to 22, 2021. Visit www.FOFS.ca for the full short film lineup.

"It is my hope that, by making this film, I can shed some light on how a person might transition between a place of relative mental stability to a place of crisis."