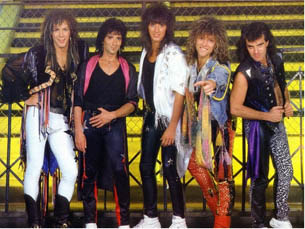 Art Matters Closing Party @ Eastern Bloc
Art Matters goes out with a bang this Friday with a free show from local supergroup Clues (composed of members of Arcade Fire and the Unicorns) and Ultrathin.  I can neither confirm nor deny Eastern Bloc’s liquor license  (last time I went it was BYOB) so bring provisions, just in case!
9pm. (Space is limited, get there early!)
Free. Eastern Bloc – 7240 Clark.
http://www.artmattersfestival.com/
http://www.myspace.com/cclluueess
http://www.myspace.com/ultrathinmtl

Bon Jovi @ Bell Centre
All those years of belting out “Livin’ on a Prayer” and “Bad Medicine” at karaoke bars finally pay off. Jon Bon, Sambora and the rest treat us to not one but TWO crazy nights of 80s hair metal, 90s soft metal and 00s easy listening. Wake up and French kiss the morning, and have a nice day!
Doors 7:30pm.
Tickets $35 to $137. Bell Centre – 1250 de la Gauchetiere, Metro Lucien L’Allier.

The Vagina Monologues @ Concordia
Concordia ’s Volunteers in Action (VIA) presents the Vagina Monologues, Eve Ensler’s play about women’s experiences with sex, relationships and violence. Funny and poignant, it celebrates women’s sexuality and enduring strength. Part of proceeds will go to the Native Woman’s Shelter here in Montreal and to City of Joy, a safehouse for women in the Congo.
Both performances, March 20th and 21st, at 7:30pm (doors open at 7:00pm).
Tickets $15, $12 student.  Concordia’s DB Clarke Theatre – 1455 de Maisonneuve W.
Tickets available at door or by emailing tickets@viaconcordia.ca.