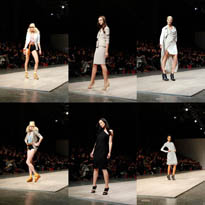 What better way to kick off LG Fashion week than for the Canadian high end monopolizer Holt Renfrew to showcase a smattering of Canadian talent. Smythe, Jeremy Laing, Pink Tartan and other ‘best of’s’ showed glimpses of their spring collection. Not to mention the de facto guest-of-honour, Coco Rocha introduced the designers, complete with one of those model moment groaners where the tech guy had to come fix the mic because she was too tall to use it. “I’m a taller girl,” she chimes. Chuckle, clap, groan.

Anyways. Stone-faced fashion editors populated the front row, madly twitpic-ing in what looked like the thumb Olympics. I say Jeanne Beker gets the gold.

The show opens with a video to set the mood. A pink-lipped lady sits at her typewriter, smokes, drinks and writes, “pink is the navy blue of India.” She does some crossing out and Pink becomes magenta, India is Canada. The crowd claps and we feel proud to be part of such a sassy nation, right on cue. Well played, Holts.

The clothes live up to the argument. The natural standouts began with Jeremy Laing. The Canadian king of cool’s spring collection was a silky ode to the many shades of white, draping and wrapping. The ladies of Smythe presented a playful collection of their signature blazers in all colours of spring. Electric-coloured socks were worn with sandals, giving faux pas a run for its money. Pink Tartan also gave a little teaser, with long dresses and vibrant pantsuits, each adorned with matching hats and round jumbo shades.

A smorgasbord of Canadian talent, if I ever saw one. Again, well played. Welcome to Toronto Fashion Week.