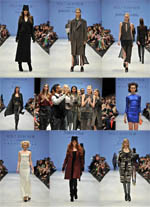 Yes, Holts is our destination for luxury fashion, but that does not mean they are snobs. For the opening of World MasterCard Fashion Week, the department store went with playful and happy versus A-T-T-I-T-U-D-E, kicking things off (literally) with a jaunty tap dance and smile. Nice.

Every fashion week Holts makes a tough decision on which of their high performing designers will make the runway cut. Lida Baday, Jeremy Laing and SMYTHE are always front runners but this season the tent was also dazzled by Line, Mackage, TwentyCluny, Dennis Merotto and Judith & Charles.

In contrast to the brightly hued pants on show by front row media, Fall/Winter 2012 is darker and more moody, with designers loving earthy tribals and going back to black. No more animal prints, but rather, accessories: SMYTHE models wore little cat ears and Mackage jackets were topped off with feathered heads. Meowww…coo, which wild beast are you?

No surprise that Jeremy Laing received the most nods, but you’ll likely find us wearing the more feminine and sexy low backs by TwentyCluny.

Tap dancing man returned for the finale and we found ourselves shimmying in tandem, if only in our minds. A special après show cocktail gifted guests with the signature Holts magenta umbrella. Although the rain drizzled outside, we made like the ladies in Umbrellas of Cherbourg and twirled all the way home. The winter collections may be dark but right now it is spring; for now we’ll wear colour and dance in the streets like perky obnoxious happy people. Why not?