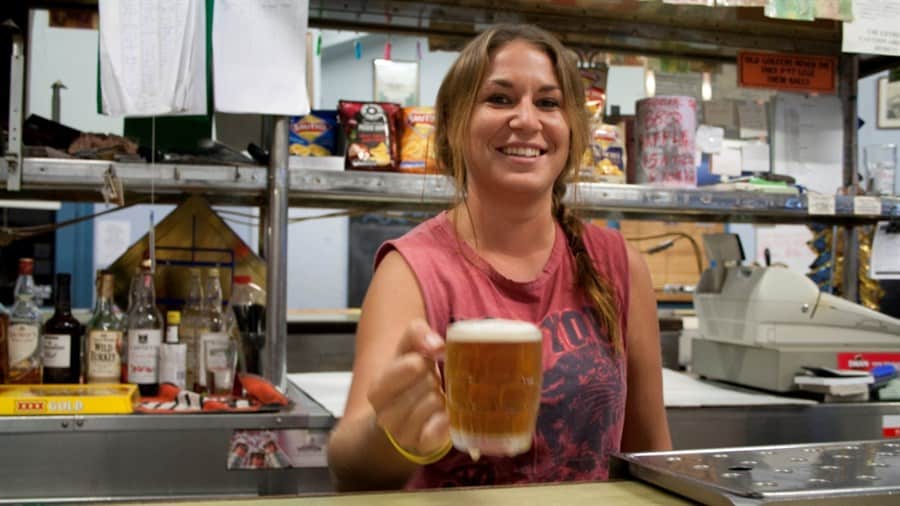 Hotel Coolgardie is a journey into the Australian outback, where two Finnish backpackers find themselves the latest batch of “fresh meat,” sent to work as barmaids at the only pub in a remote mining town. Even in an era of pay equity and gender equality, sexual harassment in the workplace is alive and well.

SDTC: Why were you drawn to this subject?

PG: As an ob-doc filmmaker, I’m always looking for potential settings that might also work as some kind of microcosm from which we can explore wider social truths, but which also have enough potential in the way of characters, definitive entry/exit points and other stuff which might enable me to also craft a cohesive narrative.

So having stumbled upon this outback pub and the practice of changing the (always foreign and always female) bar staff every three months, I decided I wanted to explore that further.

At first I didn’t know what the exact “subject” of the film would be, but I was interested in the notion of “adaption.” The experience of every new pair of “barmaids” after they arrived in Coolgardie depended very much on how well they were able to adapt to the prevailing culture. Some adapted very well, very quickly (some have loved the place so much they remained in the area and married locals), and some found it much more difficult.

And then of course I was interested in the blokes – the expectations they had on the women to adapt, and what that entailed in such a male-dominated environment – what the power dynamic in that “adaptation” equation was.

I thought by observing what happened in this small and rather contained micro-environment, the film might be able to reflect things about the wider underpinnings of my culture in terms of gender expectations and/or our expectations of people arriving in our country.

What did you learn while making this film?

I learned what it must be like to have to be constantly ducking and weaving, deflecting and mitigating the attentions of people you don’t necessarily want the attention of.

I think I also learned about the building blocks of culture. No one person controls culture – it’s a consensus made largely via non-objection to the people and practices dominating it. No one in this film does anything that is devastatingly awful. Yet the combined actions of many forms an aggregate experience that isn’t much fun for our subjects.

Sexual harassment is alive and well the world over. Why does it persist, in your opinion? What steps can be taken to address it and begin to move away from it?

There seems to be two ever more polarized, ever more entrenched camps forming in western society: those who wish for humans to organize themselves in a way in which humans look after after humans regardless of who they are, what they, or where they come from – and those who wish to differentiate themselves from other humans so as not to feel any responsibility to anybody other than themselves and those like them.

I don’t have the answers. For me, any type of discriminatory behaviour is tied into whether you want to be the former or the latter.

Healthy and vigorous discussion, insight into another world, and an idea of whether that world reflects something about their own.

Hotel Coolgardie screens on May 1st at TIFF Bell Lightbox, and May 2 & 7 at Scotiabank Theatre.