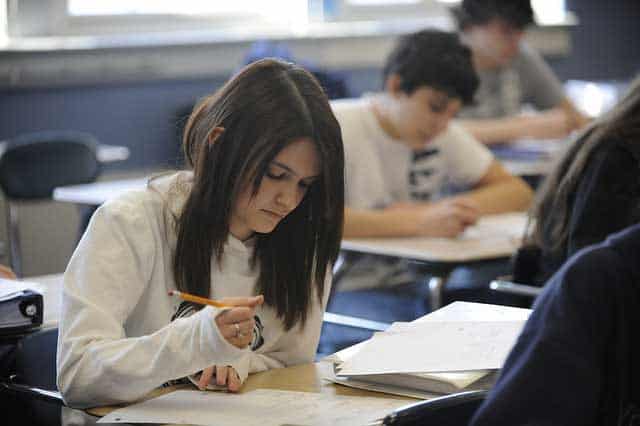 There is no doubt that your mental health has an impact on your ability to learn. But how can we take steps to improve the latter while tending to the former?

Vanessa Vakharia is the founder and director of The Math Guru, a boutique math & science tutoring studio in Toronto. She has her Masters of Math Education and specializes on teenage engagement in mathematics education. We spoke with her about the connection between mental health and learning, and how you can quell your performance anxiety in order to learn better.

SDTC: Can you describe how mental illness and poor educational performance reinforce one another? What are you seeing with students today?

VV: The past few years have marked huge strides in mental health awareness – from Bell Let’s Talk, to The Dialogue Projects, we’re finally all starting to get used to the fact that mental health is something so many people struggle with. As someone on the frontlines when it comes to teenagers and their education, I have noticed that one thing we often don’t talk about is how mental health and educational performance affect one another.

Because The Math Guru deals mostly with students’ relationships with math and science, we see a ton of math anxiety. Now, math anxiety is often looked at as a category of its very own, but more often than not, those with math anxiety suffer from generalized anxiety and above all, major confidence issues. I had a Grade 10 student recount a traumatizing event to me the other day. She had tears in her eyes as she explained that because she had never learned how to calculate the area of a rectangle in Grade 5, she has had intense and undeniable shame in every math class ever since. It was so incredibly sad to listen to this girl tell her story, to admit that her self worth had been shot for years because of something as simple as the area equation!

But the truth is, it’s not so simple. Educational performance and mental illness are a feedback loop. One doesn’t ‘cause’ the other necessarily, but rather, they both feed off of each other. For instance, take a student with generalized anxiety: Anxiety legitimately causes biological responses in the brain which cause students to freeze up during tests and perform poorly. In turn, this poor performance reinforces a student’s anxiety, in a sense ‘proving’ that the student’s performance is in fact something to stress about! It’s a crazy cycle, and the only way to stop it is to deal with the root cause – which is the actual mental health issue at play.

What do you think is causing the spike in anxiety, ADHD, depression, etc. in many students today?

I find that many people are skeptical of what appears to be a huge spike in the prevalence of mental health issues; however, I think that there are legitimate reasons for the perceived increase. Remember, we’re not saying that all of a sudden the number of children with say, ADHD, has tripled in the past two years – we’re saying that the number of diagnoses has increased dramatically. There are quite a few reasons for this: first, we’re simply able to recognize symptoms and make diagnoses much more efficiently than we were able to in the past! The widespread wealth of information now available makes it much easier for parents to recognize the possibility of mental health issues in their children, which is a really good thing! In fact, that it’s becoming less stigmatic to have mental health issues enables kids themselves to spot a potential issue, which is really empowering and helpful for them as well as their parents.

In addition to simply having more of a societal knowledge base to work with, there is the argument that the increasingly technological nature of our world is largely to blame for mental health issues, especially ADHD. We can all agree that the constant beep-boop-beeping of our tech devices can drive us totally bonkers if not managed properly, and there is no doubt that the plethora of apps at our fingertips makes it hard to focus on any one given thing at a time. Moreover, the ease with which one can compare oneself to others on a variety of social media platforms really does lend itself to the low self-confidence and self-worth often associated with depression.

What are small steps we can take to address these issues? Do we tackle the mental health aspect or the school performance aspect first?

Tackling both the mental health aspect in addition to the performance aspect simultaneously is essential as one informs the other. I think the most important thing to remember is that overcoming mental health obstacles take time – there is no quick solution. Schoolwork can be a trigger, but I always like to think of it as a potential solution! While stressing out over math homework can reinforce negative self worth, doing well can actually augment it. Small steps might include working with a tutor or teacher in order to create a learning environment that helps a particular student see that they can do well and be successful. For example, there are many accommodations available to students suffering from mental health issues. These accommodations remove common barriers to success, enabling students to see that they are in fact talented, intelligent, and capable. Another small step involves getting the right diagnosis in order to figure out which accommodations can actually help. Check out Parents Advocacy for a list of resources to help you get your child diagnosed and on track!

Can you give us 3 tips to alleviate anxiety (in the midst of exam time pressure)?

Tip #1: CHILL OUT! Seriously, chill out. Most of us look at an exam as this dreadful test of what we don’t know, but it’s time to start looking at it as an opportunity to show off what we do know. Remember, it’s just one exam – in five years I promise you that it will be nothing but a distant memory!

Tip #2: Breathe. If you’re actually freaking out and feeling a bit out of control, there is something to be said about simply taking a deep breath. Stop what you’re doing, plant your feet firmly on the floor, and take a deep breath. Count to ten as you let that breath out. Repeat five times, and then get back to whatever you were doing. Spoiler alert: you can TOTALLY do this in the middle of your exam – no one will notice, and it will definitely calm you down!

Tip #3: Prove yourself wrong. One of my favourite mindfulness techniques to use with students claiming that they “suck at math and are destined to a life of failure,” is called the reality check. Math anxiety often gets to us by making us feel stupid or incapable, causing a lack of confidence that is essentially debilitating. Start by writing down the intruding thought on the top of a page, for example, “I AM A FAILURE.” Now make a list of facts that support that, and facts that refute it. Kids will see quickly that they don’t actually believe the negative thought – it is simply an intrusive distraction! For more mindfulness strategies to introduce into you and your child’s daily life, check out this awesome Pinterest board!

Moving too fast? The ‘Find Your Slow’ writing workshop brings balance to a hectic world