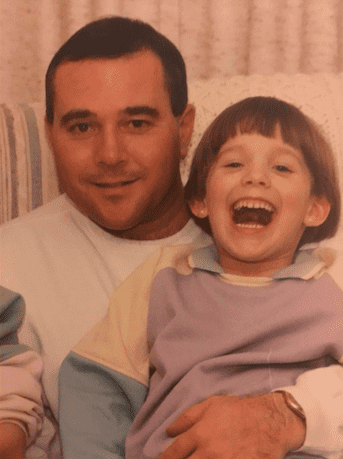 My dad died suddenly five years ago, and to say it was an enormous shock would be an understatement.

We don’t know exactly why he died, but I know that his severe dependency on alcohol played a major role in his untimely death. I know this because my dad was a heavy drinker my entire life. He abused his body for years. You can only ask your body to process poison for so long before it says no. His passing forced me to closely examine my own relationship with booze.

My introduction to drinking began with sips from my dad’s beer. I was five years old when I first tried it. Being the curious person I was, I probably pestered my dad enough to let me try his beer and my dad probably caved, thinking I would think it tasted horrible (it did) and be turned off of booze for life (I wasn’t). But it was in high school when my drinking really took off. At the time, I was dating someone older, someone who could legally buy alcohol, so access to it was easier. It started with mostly drinking on weekends but led to drinking alone in my bedroom during my parents’ messy separation.

In university, my drinking moved from experimentation to regular binge drinking. I was living on my own and was old enough to buy alcohol and drink at bars. This gave me a sense of adult-like freedom and independence that I naturally took to the extreme. Over time, my tolerance increased, as did my dependence on booze to help me manage my life and, ultimately, myself. I had watched my dad use alcohol to cope with life, and in the absence of healthy strategies, I emulated him.

By the time my dad passed away, I was drinking heavily and regularly. I drank daily. I’d have a bottle of wine to myself at dinner parties when the rest of the group shared a bottle. I turned to booze to either amplify or numb my feelings, depending on what I was looking for. Towards the end of my drinking, like my dad, I was at the liquor store multiple times a week and even went as far as attending a tranquil, peaceful, soul-soothing yoga retreat…drunk. Even the most pleasurable of activities could no longer be enjoyed sober. Despite seeing my father virtually drink himself to death, I turned to alcohol to soothe the deep sadness and grief that came along with losing a parent. I always had booze in the house, looked for opportunities to drink and did so without abandon or limitations. More was better because it meant I temporarily felt less, and that was the goal.

Under the guise of “self-care,” I gave myself permission to do whatever I needed to do to get through the immense and suffocating pain I was experiencing. And that included drinking. A lot. I can now laugh (and cry) at the absurdity and oxymoronic notion of drinking as self-care, but at the time I did not trust myself or believe I had the capacity to manage the waves of grief that came crashing down on me. The grief was utterly crippling and all-consuming; there were days when I could barely peel myself off the floor. In the early days after my dad’s passing, I was brought to my knees by the sheer weight of my sadness on more than one occasion. My dad, with whom I had a complicated relationship, was gone forever. The finality of his death was sobering, and there was nothing I could do or say to bring him back. So I drank to numb the pain. I drank to create space between myself and the harsh edges of my feelings. My drinking would get much worse before it got better.

Recognizing that I needed to stop drinking did not happen for me according to the typical narrative. I didn’t go to rehab. I didn’t get a DUI. I didn’t lose my job or any significant relationships in my life. As time passed and my drinking increased, so too did the pit in my stomach that told me this had to stop. My drinking was slowly but surely ruining my life and my relationships, abolishing my creativity and impeding my goals. Most importantly, it was devastating my mental, emotional, physical and spiritual health.

My dad’s death took me to the brink of my drinking problem, and his drinking subsequently pulled me back from the edge. In witnessing his life (and death), I learned how to live on my own by embodying a deep, visceral understanding that life is pure magic and we each have the power to create change in our own lives. In witnessing how my dad lived his life (in sadness, depression, isolation, addiction and fear), I learned the importance of owning every part of myself. Of fully engaging in the creation of my life and not letting anything–including alcohol–control me.

Morbid as it may sound, my dad’s death was a life-changing and life-saving gift for me. Only through sobriety have I been able to so fully reflect on my dad’s life and death, make these connections and move into a place of gratitude and appreciation for his passing. Had he not lived and died in the ways that he did, I would likely still be drinking, and if that were the case, I know that my life would look vividly different, and not for the better.

Everything amazing that exists in my life today was made possible through my sobriety. I am truly living the intentional life of my dreams, entirely on my own terms. I am living purposefully with my coaching practice, where I support women like me who struggle with their drinking and want to be sober but don’t know how. I am in loving, supportive, engaged relationships with the best people on the planet. I am growing, learning and stretching myself mentally, emotionally, physically and spiritually daily. After he died, I was in what felt like the deepest, darkest hole I could imagine, never knowing if I would emerge into the light again. Now, five years later, I am not only living in the light; I am the light, for which I am eternally grateful to my dad.

If you are currently struggling, grieving, or feel like you’re in a bottomless pit, I see you. I know what you’re feeling. It doesn’t last forever. Allow your feelings to move through you but don’t let them take up permanent residence. And importantly, be open to the possibility that your greatest struggle could one day become your greatest strength.

Amy C. Willis is a Sobriety + Mindset Coach helping to show women struggling with alcohol use disorder how to #LosetheBooze and design lives they don’t want to escape from. Follow her on Instagram, or check out more of her work here.