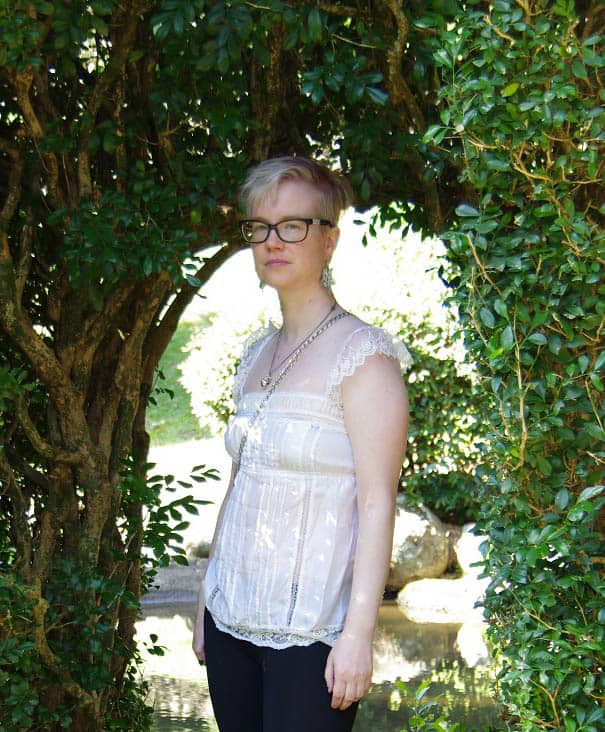 The trauma arising from those formative experiences caused her to develop PTSD. After many years of grappling with its effects, she was able to begin her journey toward recovery. Kale has used what happened to inform the characters within her new dystopian sci-fi novel, A Broken Winter. Set in a perpetual state of winter (inspired by Canada’s North), her novel gives readers the opportunity to learn about PTSD and traumatic situations, and her characters offer strength and hope in a way that connects with readers on the struggles they may be facing.

SDTC: How did your PTSD manifest itself?

KK: The first symptom of PTSD I noticed is anxiety. At age twelve, I went from having no problem falling asleep at night, to lying awake worrying about overdue library books. I worried all the time, about everything. I’d never been an anxious kid. In the third grade I wrote plays and performed them in front of the class without a hint of stage fright or shame (apologies to my classmates). I don’t recall ever questioning why everything started stressing me out. It never occurred to me that feeling unsafe at school could possibly make me feel unsafe elsewhere.

From there, I became depressed and withdrawn. I lost interest in things that previously brought me joy. If I wasn’t sad, I was angry. Angry at everyone and everything.

Over the years, the sadness grew, and the rage percolated, and I became frightened by everything. By the time I was twenty years old, and in my third year of classes at the University of Calgary, my anxiety had become so severe that I stopped leaving my apartment unless I had to. I stopped attending classes. I got yelled at by the building superintendent for never picking up my mail. I couldn’t face what was in the mailbox, no more than I could face the outside world. Bills stressed me out, even though I had the money to pay them. They meant having to go into a bank and deal with people. I was constantly miserable. I kept thinking whatever the hell was wrong with me would go away on its own. That I’d wake up one morning and not feel like my chest is caving in. I’m not sure if it was raw stubbornness, or denial, or some tragic combination of the two.

I started sleeping as much as I could, because sleep meant not having to deal with anything. I had horrific nightmares, but they were less frightening than being awake. At one point, I was sleeping up to 24 hours at a time, which is not something I recommend, unless you enjoy being so dehydrated that you can practically feel your brain sticking to your skull. When I had trouble sleeping, which was often, I took cough medicine or antinauseants, to the point where I started to feel as unwell physically as I did mentally.

I finally broke down to the point where I was willing to admit I needed help and went to a walk-in clinic, determined to become a somewhat functional human being. The doctor prescribed me medication used for treating mood and anxiety disorders. I was violently ill for the first few days, which I would soon discover is normal with such medications. After several weeks, any form of light burned my eyes. I developed massive, never-ending headaches. I couldn’t see straight. I went back to the doctor, who informed me, “Either it’s a side-effect of your medication, or you have a brain tumour.”

Several medications later, I finally got a family doctor, who was the first doctor I’d encountered who thought it might be a good idea to send me for a psychiatric evaluation.

At my appointment, the doctor threw me off with questions about my past. I didn’t see what that had to do with anything. I told him I’d had a hard time in school. I was one of those unapologetically weird kids who functioned as a magnet for assholes. I failed gym in the eight grade because I was too terrified to be alone with the other kids in the changing room, and always “forgot” my gym clothes. Starting from grade seven, I endured six years of emotional and physical abuse. When I was informed these factors are well-known contributors to PTSD, I was stunned. Up to this point, I thought PTSD meant enduring something really awful, like fighting in a war, or seeing a loved one die horrifically, not junior high.

When did you realize that comics and reading were having a therapeutic effect on you in dealing with your trauma?

When I finally decided again sleeping to avoid dealing with reality, I looked for other ways to avoid dealing with reality. I lost interest in reading when I was at my worst, but the desire slowly returned, along with my ability to concentrate, and I noticed the benefits. Reading helps block out negative thoughts and makes negative emotions easier to ignore. It gives me something positive to fixate on. I like to read before bed, because instead of obsessing over stupid crap, I’m focused on something both helpful and constructive. Makes it easier to fall asleep. 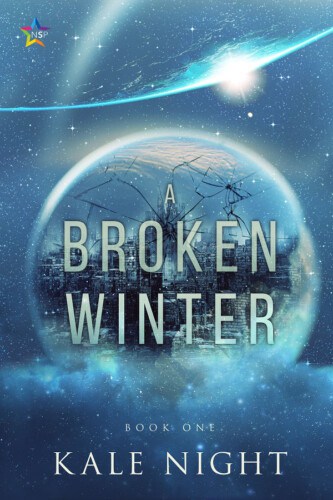 Fast forward to now; you used your experiences with PTSD and trauma to write your own book. What A Broken Winter about?

It’s about a world trapped in perpetual winter. Haken, the emperor of Terasyn, claims to have swallowed the sun as punishment for delinquent behaviour. People who question this explanation tend to disappear.

Auryn Tyrus is sent to spy on suspected radical Reisen Kaneko, but finds himself strangely drawn to the man. Instead of reporting on Reisen’s rants about the emperor’s delinquent son or suspicions about where their oxygen really comes from, Auryn grows protective of Reisen.

One day Reisen, is exposed to a parasite infecting a number of soldiers and everything changes. Reisen becomes more vocal about his lack of faith in Haken’s fire swallowing abilities and is branded a terrorist. Auryn helps him escape.

A decade later, the emperor’s endless search for Reisen turns up an unexpected surprise – a seven-year-old boy who claims to be Reisen’s son. Keita. Keita is terrified and confused, unable and unwilling to assist interrogators who are trying to track down his father. He’s sentenced to be executed, but Auryn secretly intervenes, saving Keita, turning his life upside down. 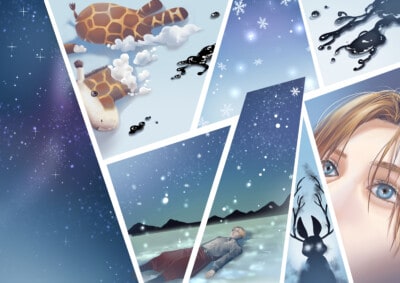 Illustration by Archie the RedCat

What do you want people to understand about the nature of PTSD?

The longer it’s left untreated, the worse it is to deal with. If you’ve experienced trauma and are feeling anxious and disconnected, please speak to a doctor about it. I went eight years without treatment. As a result of that, the chemistry and anatomy of my brain is permanently altered. Fourteen years after being diagnosed with PTSD, I’m still in constant “fight or flight” mode. I can’t drink coffee because caffeine gives me panic attacks. In the last few years, I’ve developed misophonia, which implies part of my brain is dysfunctional. Misophonia means I’m triggered by certain sounds (usually sneezing or chewing), which fill me with annoyance and rage. Right when you think life with PTSD can’t possibly get more fun, you find yourself wanting to scream and throw things every time someone sneezes.

What do you want us to understand about trauma?

Trauma physically changes the brain. PTSD can be detected in brain imaging scans, because the hippocampus shrinks. The sooner PTSD is treated, the greater the chance of recovery, and the less severe symptoms are going to be. I didn’t start out with crippling anxiety and relentless misery. It took a while for the wound to fester.

An important thing to recognise about trauma is that it comes in numerous forms and every form is valid. I had no idea PTSD occurs in kids who are bullied. Whether you’re fighting cancer, stuck in abusive relationship, or mourning the loss of a baby, you’ve experienced genuine trauma, and your pain is legitimate. When the brain is flooded with stress hormones all day, the result is the same. The reason for the flood doesn’t matter.

What was your process behind writing your book A Broken Winter?

I started writing without an outline (a mistake I won’t repeat) or any clear idea of where the plot was going. I wanted to do something involving a young boy being rescued from a corrupt government, and somehow tie that in with a dream I had about a scientist from earth who gets abducted by warlike aliens, but beyond that I had nothing specific in mind. I’d write a script for the next chapter of the webcomic the novel is based on, then take the script and covert it into something more literary. I decided on writing about a world with no sun, inspired by winter in northern Alberta, and spent a lot of time working out the logistics of the setting. Where would they get their oxygen from? How would they produce food? I fell in love with world building, something I had no previous experience with.My lack of experience showed in the first draft. World building turned into numerous instances of information dumping. Between reducing the number of history lessons, and eliminating a number of sub-plots which only made things more complicated, I cut out around forty thousand words.

I hope A Broken Winter inspires readers to tackle any mental health issues they may be having. It’s not worth putting it off. One of the most important things you can do is talk about what’s bothering you. There’s lots of wonderful support groups available and I strongly encourage people to use them. Talking to someone who knows what you’re going through is helpful.