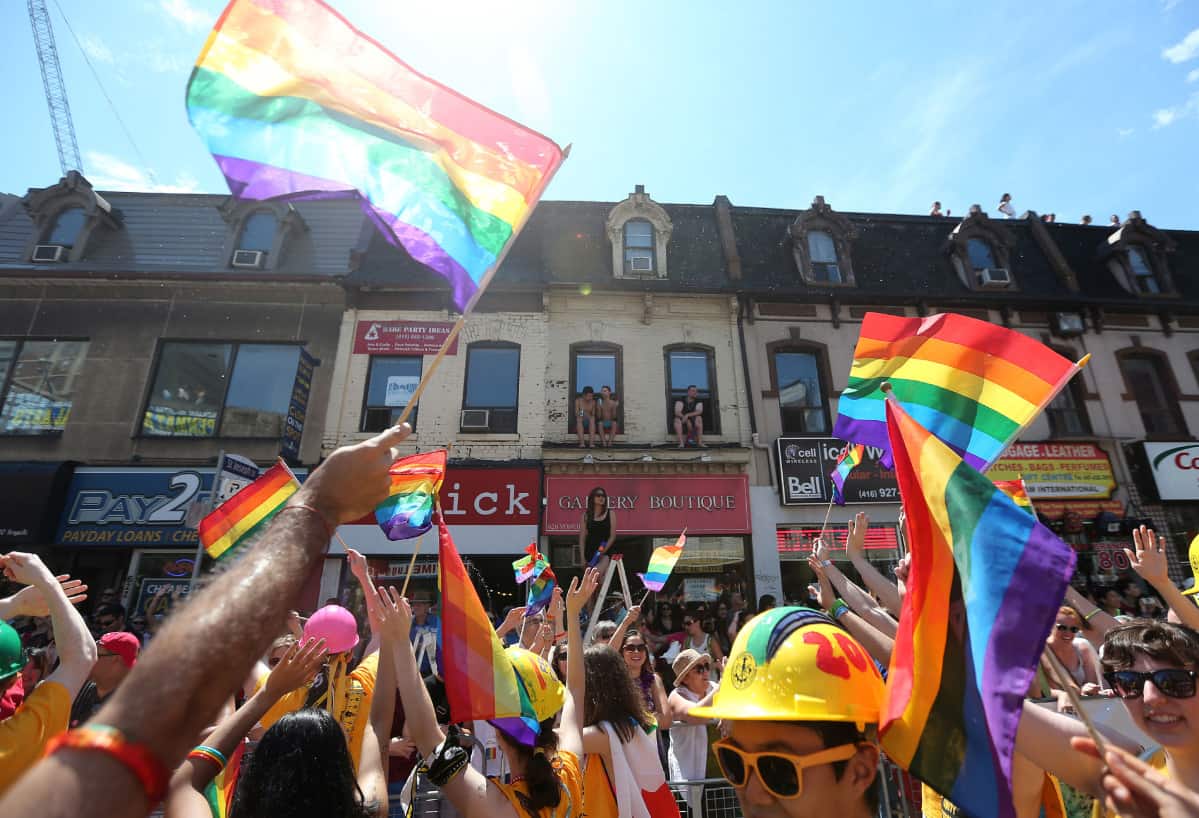 How to Get the Most out of Your World Pride Weekend

It’s World Pride baby! The nine day celebration of our LGBTQ+ communities has already began, but the full-fledged insanity of Pride weekend (June 27-29th) is still on its way. There are enough events to entertain the expected 2 million festival goers, meaning that things might be a little difficult to navigate! So let’s make some sense of the madness. There are marches and the annual parade, official Pride affiliated events, and plenty of other places to find alcohol and a dance floor. Let’s get to it:

Trans* March – Friday June 27th – 7pm
Trans* Pride represents any person within the trans* spectrum, which refers to anyone whose gender identities do not match the bodies they were born with. The Rally begins at 7pm at the North Stage (intersection of Church Street and Isabella Street), where you can hear inspirational speakers and learn the chants for the march. The march will begin at 8pm. There is a post-march showcase at Yonge-Dundas Square featuring Crack Puppy, The Cliks, and AGAINST ME!.

Dyke March – Saturday June 28th – 1:30pm
The Dyke March is not a parade – it is a political demonstration of critical mass; a moment seized to revel in the strength, diversity and passion of LGBTTIQQ2SA women and trans folk. Sign making begins at 12:30pm, the rally is at 1:30pm, and the march begins at 2pm.

Annual Pride Parade – Sunday, June 29th at 1pm
This year, Toronto celebrates 34 years of Pride and the excitement of hosting WorldPride 2014. From the corner of Church Street and Bloor Street all the way down Yonge St to Yonge-Dundas Square, Toronto’s LGBTTIQQ2SA communities will dance to celebrate our victories, march to honour our losses, and rise up to keep moving forward.

Greenspace: World Pride Edition
Greenspace in Cawartha Park behind the 519 is the meeting spot in The Village. There will be Lipstick Jungle, One World, Starry Night Disco Disco, TreeHouse and more – check out their website for all the details!

Human Rights Conference – June 25-27
From June 25—27, 2014 the WorldPride Human Rights Conference will take place in downtown Toronto, bringing together an exciting gathering of activists, artists, educators, journalists, policymakers, students, and others engaged in LGBTQ human rights from over 50 countries around the world.  The conference provides a unique opportunity for a global dialogue. Up to 150 LGBTQ+ rights leaders from around the world will speak

Streetfair
From Friday, June 27 until Sunday, June 29 the streets will be closed off at the Church-Wellsley village for vendors and pedestrians. Browse the wares of the Marketplace, home to fantastic artisans and a diverse selection of delicious food from partnering vendors. The street fair runs through until 2 p.m. on Friday and Saturday, and entrance is free.

Closing ceremonies
World pride is bringing out the big guns for entertainment on the last night of the festivities, including Tegan and Sara, Rich Aucoin, Hunter Valentine, Robin S, Cece Peniston, God Des & She, and more. The Closing Ceremony includes the Parade Awards and the hand-over to the next WorldPride host city. A single night of spectacle not to be missed in the heart of downtown Toronto in Yonge-Dundas Square!

Steers and Queers: Night of 1000 Dollys / The Gladstone / June 26 / 9pm / $10-12
A full Dolly Parton Choir, drag, burlesque, live music and a Dolly look-a-like contest. DJ’s Joe Blow and Sigourney Beaver taking it home, homo on the range. It’s a wild dance party with plaid as far as the eye can see.

A Club Called Rhonda / The Drake / June 26 / 10pm / $10
After stops in NYC, Paris, Tokyo and Miami, A Club Called Rhonda returns to Toronto for a  party celebrating polysexuality! Starting at 10pm, all three floors of the Drake will be taken over for a dance-y extravaganza of house and disco beats.

VASELINE / SHAME / VAZALEEN / Wrongbar / June 29 / 9pm / $15
The last day of pride calls for a dirty disco dance party! Wrongbar will be packed with bodies grooving to sounds from Shadowy Men on a Shadowy Planet, Jenna Syde, plus some wicked DJs. Shame is a benefit for the Will Munro Queers Living With Cancer Fund.

Drag King Karaoke / The Beaver / June 29 / 6pm/ Free + Food
Gear up for a beefcake filled night with a pop up BBQ from DOG DAYS on the back patio. Then get ready for a hunky new twist on Beaver Sunday nights, with Drag King Karaoke hosted by your two favourite baby bois YNEZ and STACI.