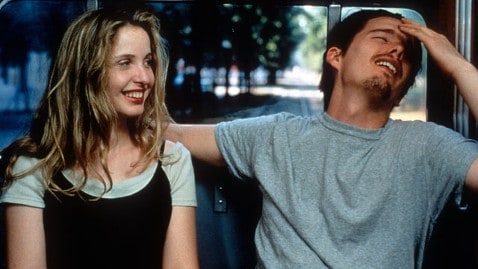 How To Travel With a Guy For the First Time

When I told my friends that Guy (meaning “the guy,” not some creepy French dude named “Guy”) and I were planning a 12-day vacation together, some raised their eyebrows. Others commented, “It’s about time!” I mean, I get it. I’m 31, and I had never traveled with a guy (not even a guy named Guy) before.

OK, that’s not entirely true. I once went to L.A. with a guy I was banging, but we were there to perform in a festival anyway, so that doesn’t really count. And then there was the time I went to Tarrytown with a boyfriend, but it’s Tarrytown (I know—where?), so that doesn’t count, either.
So, when my friends—who seem to constantly be traveling with their partners and husbands—would give me their post-vacation “sand, surf and sex” wrap up, I would wonder when it was going to be my turn.

I think we can all agree that the thought of vacationing somewhere with a lover certainly seems appealing. I mean, what’s better than traveling to a gorgeous destination with someone who makes you laugh AND come (maybe even at the same time), right?!

But there’s something that our friends don’t tell us in their tropical tales of getting drunk at the pool bar and doing it Mile High Club-style. They forget to mention that…YOU’RE SPENDING 24 HOURS A DAY WITH ONE PERSON! For any type of relationship, romantic or not, that’s a big deal. But when it comes to the person you’re knocking boots with discovering you spend about two hours getting ready for bed, or that you can get pretty hangry if you don’t eat every three hours, then, suddenly, the idea of vacationing with your partner gets less romantic and more real.

I’m not talking about how taking a trip with your lovefriend ramps up the pressure of your relationship (because that’s pretty much Captain Obvious stuff). I’m talking about the nitty gritty shit that no one talks about, like, well, going number two while your partner is in the next room. That shit.
Vacationing with your person isn’t just rose petals on the bedspread, but it’s something you’ll always remember, and hopefully with these tips, it will be a “make” not a “break” moment for your relationship.

Own Your Rituals – Getting ready for bed is a huge ordeal for me. Like a 45-minute ordeal that consists of about five different lotions and oils being applied to my face. Post-shower is just as long and detailed, especially when there’s a hair dryer involved. At first, I thought that my getting-ready rituals would come across as high maintenance, or some other gross label, but, then, I thought, “Fuck it. This is me. Baby’s got no crow’s fee for a reason!” And, guess what? Guy actually dug that I took care of myself. Don’t skimp on the SPF for a brosef. Just decide who uses the washroom first in the morning and at night, and don’t be surprised if he uses of some of your anti-wrinkle cream.

It’s OK to be Cranky – People get cranky. Fact. Blame it on a drop in blood sugar or even the much-anticipated morning cup of joe that tastes like tar, whatever, peeps get annoying/annoyed fast. It’s normal. I have to eat every three or four hours, or else I get super hangry. It’s not my best feature, but we all have our trigger points that turn us into Mr. Hydes. So when this happens on your trip (because it will), give your partner the benefit of the doubt and know that it will pass. Also, remember their patience with you when they start getting edgy. And maybe bring snacks?

You Don’t Have To Have Sex 24/7 – Vacationing with your lover means loads more sexy-times. Sexy-times can be pretty much anytime you want during a vacation (10 am? 3:30 pm? ALL DAY?!) because of accessibility, and let’s face it, sex in new locales is hot and exciting. But, after a few glasses of wine and a day of walking 40,000 FitBit steps, it’s perfectly OK for you two to pass out. There’s always morning sex.

Alone Time is Necessary – Traveling is a weird variable that forces people to spend all – like every waking second — of their time together. It’s not real life. No one spends that much time with anyone ever. So, it’s totally normal to want to be by yourself on your trip. Even if it’s fitting in an hour at the gym or taking a short walk, having a moment to yourself is important and necessary to recharge for both you and your lov-ah. I mean, because, really, EVERY WAKING SECOND?

Go Poo – OK, this might seem obvious, but going number two while your partner is in the next room is a big deal. It requires a different kind of intimacy and level of comfort that not every relationship has because it’s super revealing, and yes, embarrassing. I tried a bunch of techniques to hide my “personal time.” Going when he wasn’t in the room, turning the faucet on, lining the bottom of the toilet with paper to silence the, uh, drop. But, honestly, going all “Mission Impossible” just made my mission, well, impossible. After writhing in pain – seven days later! — he asked, “Are you OK?” I blurted out, “No! I’m constipated, OK?!” His response: “Just relax!” And I did. And then, I did…So, ladies, go poo. He really doesn’t care.