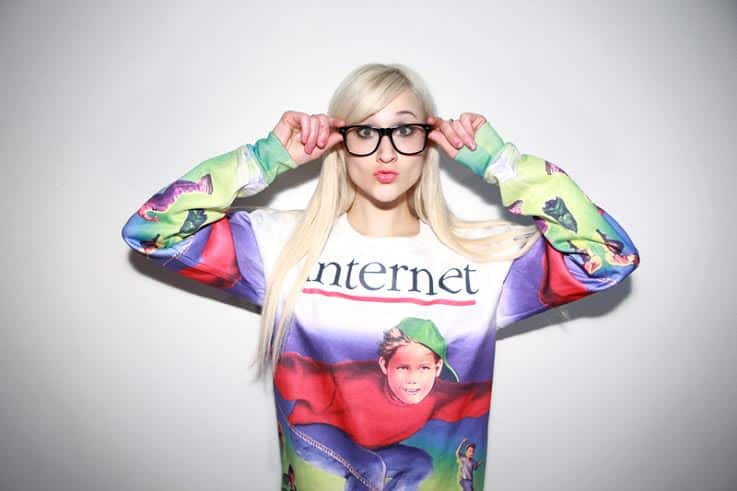 Lauren O’Neil is maybe the only person in the city you could accurately describe as a “social media maven.” The 28 year-old Chatham native lives in Toronto and works as an Associate Producer in community and social media at CBC News. She has over 30,000 Twitter followers, and an active following across her other web platforms, including a popular blog and Instagram feed. She’s also on Soundcloud, YouTube, Pinterest, Tumblr... where there is Internet, there is Lauren O’Nizzle.

We caught up with her (via email, natch) to chat about social media jobs, what it’s like putting yourself online, and how to win at Twitter.

SDTC: Hi Lauren! So, how’d you get into social media as a career?
Lauren: I never really tried or expected to get into the field of social media per se… when I first started going to University, it wasn’t a field—I was just some internet-obsessed blogging girl majoring in Communication Studies. After undergrad, I went on to get a Mastes degree in journalism. I hadn’t even heard of “social media” jobs at that time, but I continued to internet hard on my own. Now I’m a journalist, but my focus is on social media and the online world—something I’ve been a part of since before Myspace was even a thing. I guess it was a combination of education and experience that brought me to my current position. I’m really glad it all worked out the way it did. I love what I do.

You’ve got a tonnnn of twitter followers. How’d you build your following?
Haha, thanks! I guess a part of it was simply getting into Twitter at the right time. I joined in October of 2008 and have been pretty active since that time. My followers spiked a bit when I started doing more television… Being a judge on MTV Creeps really brought in a lot of Tweens. Generally though, I think that establishing a strong “brand” (sorry, I hate that word) and being consistently entertaining on Twitter are what helped me out in this regard.The people who follow me know what they’re getting—a mix of geekery, fashion stuff, pop culture, news, and #ootd selfies. If they like what I’m into, they love my feed. If not, they unfollow. I actually gain and lose quite a few followers every day. I try only to tweet out things that are truly smart or hilarious or interesting or cool or cute or breaking or fun or… well, sometimes just narcissistic… but trust, there’s a mad thirsty audience out there for selfies too. Creepy? Totally. Helpful for gaining followers (if that’s your goal)? Definitely. It’s a lot of work maintaining a really good Twitter feed, and I take it pretty seriously. Passion goes a long way towards achieving any goal. I also promote my Twitter account on my blog, my business card, in my email signatures, and it’s listed in my CBC bio as well. I think that helps a lot.

What would you say are five unbreakable commandments of social media?
1. Thou shalt not beg for RTs
2. Thou shalt not use outdated hashtags like #TeamFollowBack or #Blessed (unless done ironically)
3. Thou shalt not Instagram too many pointless photos of one’s face in a row (at least PRETEND to be showing off your new sunglasses or something)
4. Thou shalt not swear publicly or act skanky online (if one plans on working with any brands or future employers ever)
5. Thou shalt never click “like” on a Facebook photo from 3 years ago whilst creeping another person’s profile pics. (This is thirsty behaviour.)

Is it tough having so much of your life out there for people to see?
Meh. Sometimes. I think because I’ve been blogging for so long, I’m kind of used to it — which isn’t to say I’m completely comfortable with it. There are risks—I’ve had some scares (what up to the 4 randos who showed up to my private birthday party uninvited with inappropriately personal gifts!)—but the rewards outweigh these risks for sure. I like it when I see people out at events or on the street or even at the grocery store and they stop me to say something like “Hey! I know you from Twitter! Loved your outfit yesterday!”—like, that really makes me feel so much cooler than I actually am and I appreciate the heck out of people who do this.What irks me are the people (not to stereotype, but usually middle-aged men) who become a little bit too engaged with my online presence—commenting on every post, complimenting EVERY selfie, giving me nicknames, making me freaking fan art… (Unless you’re @darth— he can always make me art) … Like, that’s weird. I used to be flattered to an extent, but now it just annoys me. I want to scream “YOU DON’T KNOW ME!” but gah, the sad thing is that because I put so much of my life out there, they actually think they do know me. Word to the wise for anyone in this sitch—don’t go to events alone, always be kind to everyone (nothing worse than an ANGRY obsessive) and never check-in on Foursquare. It’s not 2011, you shouldn’t be doing that anyway (HASHTAG I’M A HYPOCRITE.)

How do you manage work/life balance when work and life all exist on twitter, Instagram, etc.? Or is that idea hopelessly dated these days? #newlife
Every time I speak to students, without fail somebody always asks me about this, and I usually say the same thing: “Try your best.” It’s not easy to balance your personal and professional lives on the internet, especially when so much of both is out there. I try to ensure that my personal tweets are safe enough not to be held against me in a professional context—which means I tend to shy away from overtly political, controversial and polarizing issues (within reason).

There are lots of things I’d like to put out there that I can’t—my own thoughts and opinions on certain issues, for instance—but I’m cool with that. It’s worth it. I’m also very careful not to swear or show too much skin. Keep it profesh but still true to who you are. Be funny without being offensive (unless you’re offending the Beliebers… they’re offended by anything.) It really is a “try your best” every day kind of thing. There’s no easy formula for balancing work and life online… nobody’s written the book. Maybe one day I’ll figure this stuff out enough that I can write it myself! Ha. That’d be awesome.

What’s your favourite part of your job?
I love that I get to write about the internet EVERY DAY! I’m forced to keep up on what’s cool, what’s trending, what’s newsy… and that makes for some great dinner party conversations. I’m also learning constantly, which I love, and I get to interact with people from all over the country—all over the world! It’s a cool job for sure.

What advice would you give to someone looking to grow her social media presence?
First of all, get active! You need to try hard and to be consistent every single day. Get in the habit of cruising great sites for great content, writing jokes, taking pictures of cool things… anything that’ll make people like, share, favourite and retweet it. If you’re not already famous for something other than the internet, you’re going to need to LOVE spending time online to build up a good following.

Find your niche and roll with it. If you’re into fashion, tweet about fashion—produce original content, send out links to great fashion-related articles, retweet other fashion tweeters and interact with them too. People who are into your niche will follow you as a resource. It’s a good thing. Going to events and tweeting on event hashtags (or even tweeting about televised events, like award shows) can also be a great way to build followers as well. Some of my biggest follower spikes have come from stupid jokes I’ve made about the Grammys or Game of Thrones. Be prolific, witty, and super interesting. It’ll take time, but you’ll get there.

What’s the absolute worst thing you can do on Twitter?
Being spammy is the WORST thing you can do on Twitter. Never be spammy or beg for RTs and follows. It’s so hokey and people will hate you. “HEY CAN YOU RT MY NEW SINGLE? THANKS GIRL!” is like, the worst—especially when you look at somebody’s timeline and see they’ve got 20 identical tweets in a row addressed to different people. Nobody likes a spammer, not on Twitter or anywhere else.

Whose tweets are you LOVING  right now?
Oooooh, I love so many Tweeters! Amanda Bynes was my ultimate favourite ever until, well… you know. I like the whole weird Twitter crew a lot, and really obscure, clever accounts like @Seinfeld2000 (a parody of @SeinfeldToday, which is also awesome) and the new @DougEpisodes feed. A few months ago, someone recreated the entirety of Reservoir Dogs on Twitter, line for line, and I was really feeling that. As for people, comedians really float my boat—the more irreverent, the better. Check out Witstream for tons of great comedy tweeters. Oh, and Rihanna of course—mostly because I just really miss her Instagram feed.