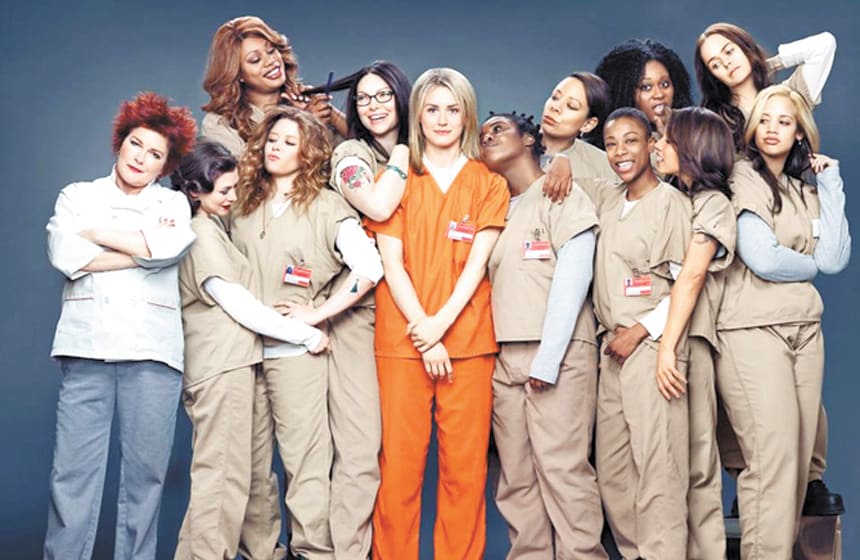 "Please note that names like “Wife #2”, “Favourite Prostitute” and “Generic Vagina” do not count."
Events & Culture

How to Write a Good Female TV/Film Character

As a writer, comedian, and feminist who works in television development, I am continuously frustrated by not only the lack of female characters in entertainment but also the types of female characters in entertainment. Don’t get me wrong, they’re not all bad, some are fantastic (like the ones in the above photo), but others don’t have nearly as much depth, power, or memorability as the men do, and I ask you, dear readers, why? Why? WHY?!?! I don’t have the answer but I do have a list of tips for how we can write, not good, but superb female characters. Now, I am no expert, but I am a passionate person filled with rage, and those are always the best people to bestow advice upon others. Fingers crossed I change the world with this.

#1: Give her a name for god’s sake. Unless she’s literally just a background extra in one scene for five milliseconds, show her some damn respect and name her. Please note that names like “Wife #2”, “Favourite Prostitute” and “Generic Vagina” do not count.

#2: Have her make words with her mouth. Sure, you have a female in your film, but is her role just to stand beside the penises in silence, smiling and nodding along with whatever they say, but never uttering a word herself? If so, you fail the Bechdel test. Congrats. You kind of suck. If you want to not suck, write her some brilliant dialogue.

#3: Do not make her appearance her main attribute. She’s not a doll made of plastic. She has working internal organs, one of them being a brain. Focus on that organ instead. The way we look does influence our life stories, and can impact those stories in a positive way, but our appearance does not define who we are and neither should hers.

#4: Lavish her with tons and tons and tons of gross flaws. Writers often think that a female character can’t have any negative qualities out of fear that she won’t be likeable. So they write the sweetest, smartest, most perfect leading lady in town who’s never made a single mistake in her entire life and to that I say SNOOOZZEEEEEE FESTTTTT. These are fine traits, but with no flaws, she’s boring as hell. What makes her likeable ARE her flaws. If she’s kind and smart, yet also a paranoid, pugnacious pyromaniac who poops her pants on the regular, well that just sounds delightful.

#5: Take it easy with the flaws, though, buddy. We also don’t want to promote the idea that women are all vile hell beasts (although I do love a good hell beast, myself). Give her redeeming qualities as well, even if she’s an antagonist. She might be evil, but maybe she’s also loyal to her minions and pays them a respectable salary with health benefits and four weeks vacation? Give her a mix of good AND bad. Make her complex, you know, like humans are. Sidenote: Women are humans, if you weren’t sure.

#6: Important one: SHE’S NOT JUST AN ACCESSORY FOR MEN. She should drive her own stories. She should be active. She should impact the plot, and distracting the enemy by walking through a scene completely naked and then never returning does not count. This is especially important if she’s THE PROTAGONIST. It breaks my feminist heart when I see female leads trailing behind a bunch of dudes like a lost little puppy dog. TRUST THAT SHE CAN LEAD because she can. Ask yourself, “Why does she, specifically, NEED to be in this story?” If your answer is “She needs to be in this story because my producer told me to put at least one chick in it so I did but I’m not happy about it,” please retire immediately and go away forever.

#7: Don’t make her the buzzkill. There is a trend happening nowadays that has female characters disciplining men for their poor choices. They say “No, bad boy! That’s wrong! Stop doing that! Stop advancing the plot!” and then they get castigated on the internet by fanboys demanding these women be killed off because they halt the action and prevent the men from “being entertaining.” Quit making females the “mean mom” who shut everything down. Of course she has a right to judge the decisions of her fellow characters and comment on their actions, but if that’s her ONLY purpose the audience is going to turn against her.

#8: Give her likes, dislikes, a job, hobbies, skills, fetishes, phobias, cheese preferences, etc. So you got a female character with a bunch of awesome traits, yet she’s still extremely dull and you don’t know why. It’s probably because she has zero interests. Add in some and suddenly she’ll be jumpin’ off the page. Maybe she likes online poker, dislikes the idea of umbrellas, has a phobia of NOT smelling pot, and just became a professional dolphin whisperer? I always ask writers, “If she were in a room, alone, what would she be doing?” and if the answer is “Thinking about balls, like not bouncy balls, testicle balls” then no. Just… no.

#9: Don’t make her hate other women. A common trope. She likes hanging out with the bros but despises club clitoris. “I don’t get along with other girls. It’s because they’re jealous of me,” is her catchphrase and she stinks. Unless there’s a reason for why she loathes two x chromosomes (like she’s a misogynist and your show is about her being a misogynist) consider having her dislike people, not sexes.

#10: If it’s a comedy, make her… um…. FUNNY. I find while watching sitcoms that the men get the best lines. The men act out the ridiculous gags. The men fall into the embarrassing situations. And the women? Well, they get to WATCH. They can’t tell jokes because they’re just NORMAL, MUNDANE WOMEN in a world filled with HYSTERICAL, ODDBALL GUYS. However, this breaks a key rule in comedy. The rule being: Everyone needs to be funny. So lets spread the comedy love around, shall we patriarchy?

#11: Write more than one woman for god’s sake. The best tip for writing a good female character is to write a lot of them and to have them talk to each other (and talk to the men, I’m not advocating segregation). A single woman in a cast of twenty guys does not progress make. That is the norm and the norm is the problem.

#12: Having a cast of women who are diverse in race, age, sexuality, body shape, gender identity, and class will result in a better show. There is obviously a glaring problem with a lack of diversity in entertainment in general, however females seem to be particularly discriminated against when it comes to this issue. Marginalized women should be more represented in the media. Their stories need to be heard as well and writers have the power to tell these stories.

#13: Still confused about how to write good female characters? Let me simplify it for you. Take your male characters and turn them into women. You’ll be surprised by how little has to change.

"Please note that names like “Wife #2”, “Favourite Prostitute” and “Generic Vagina” do not count."