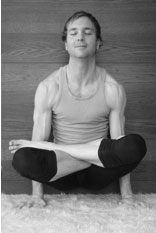 How I became a reluctant Ashtanga Yoga convert

There comes a time in every young lady’s life when she must take action. As if gray hairs, decreased tolerance to booze, and there’s-a-reason-we-don’t-keep-a-shotgun-in-the-house hangovers aren’t enough of a fuck you to my fleeting youth, I couldn’t help but start noticing changes in my body. Droopy, flabby, gunty changes. “Welcome to your mid-twenties, bitch,” said the bulge that had replaced a formerly flat stomach.

It seemed the moment I turned 26, my effortlessly lean mean physique and fast metabolism made a run for it. A body that I had once taken pride in for being slim and naturally flexible had been replaced by a hunched over, weak gangly one with strange pockets of fat. Invasion of the body snatchers? Something had to be done. Although I wasn’t sure what, because the idea of putting effort and time into physical activity seemed not only foreign to me, but horrifically boring as well.

After discussing this dilemma with some chiseled acquaintances I learned of a place called “the gym,” which turns your hard earned cash money into muscle mass. On the bright side, this gym place provides clean towels, which beats the nifty paper towel and air-dry system I have going at home.

After some deliberation and a little bit of crying I decided to give this towel-dispensing utopia a go-go. I committed. Bought cute gym clothes and spent hours in front of the mirror constructing the perfect effortless ponytail. Within a couple weeks the verdict was in – my hypothesis was correct – working out was boring as hell. By comparison, my appreciation for watching paint dry shot through the roof.

Another unfortunate part was that my mind had been battling stress and anxiety that kept me from sleeping well. Exercise was supposed to deepen the sleep cycle and improve mood, but these bi-weekly workouts had gone virtually unnoticed by my neurotic brain.

Just as I was about to give up, I stumbled upon a yoga class. It was a beginner’s Ashtanga class, which despite the name, looked pretty damn difficult. I was 10 minutes in, and all the participants were human pretzeling in perfect unison with one another, using muscles I didn’t know existed. Luckily, I had a friend in tow. Together, we decided to brave it.

An hour later we were light headed, dripping in sweat and euphoria. But having barely made it through an hour-long lunch class didn’t curb my doubts. I didn’t think I would ever be able to keep up, or do the more complex poses, let alone excel at them. I also didn’t know if I’d be able to reach the level of mental quiet that was necessary to practice correctly.

On the way out, I remarked to the instructor that the class had put the fear of God in me. To this he ominously replied, “fear doesn’t exist.” Well, that certainly didn’t help with the intimidation.

Upon coming home, my pal and I took the next logical step– googled the instructor, of course. Surely enough, he had a Facebook profile; his privacy settings weren’t up to par (although they might be now) and we got to know him a little better. Much to our delight, there were photos of him horsing around on vacations, having fun with friends and staying hydrated with carbonated night soda. Yogis: they’re just like us. Sigh of relief.

I did end up coming back the following the week, and was hooked from that point on. It’s now been three months and I’ve been going to at least two Ashtanga classes a week. I’ve also begun varying up my routine with the occasional class at the Ashtanga Center of Toronto, where Vince, yoga instructor extraordinaire and master intimidator, also teaches and studies.

Prior to committing, I had attended other classes and teachers but found that my goals were most in line with the structure and teaching style of Vince’s classes, as he manages to strike a great balance between working out the mind and body. His passion for Ashtanga is evident, and he’s remarkably attentive to the needs of his students, regardless of class size. He has a really gentle approach to giving students corrections (I receive many) without being discouraging, and is extremely patient with students who need further guidance or demonstration, with a history of being picked last in gym class (sadly, again, me).

So what’s so special about Ashtanga (8 limbs) yoga, you might ask? It’s considered the modern form of classical Hatha yoga and is more intense and physically vigorous. This form also focuses on vinyasa, which is fun to say, and matches each breathe with a movement in order to heat and cleanse the body. Regular practice is said to not only steady the mind but also purify the nervous system.

Suprisingly enough, Ashtanga is the farthest thing from boring despite the repetition. My body has never felt this light, despite the initial soreness, and my flexibility has shot through the roof. It may seem impossible at first, but the moment you figure out how to breathe properly (aka Darth Vader stylez) and push all your thoughts and worries out of mind, it’s the most relaxed you’ll feel, probably, ever.

It’s not hyperbole when I say that yoga has changed my life. It’s made me appreciate my body on a whole new level. Finding new muscles is fun fun fun and my disgusting posture has improved tenfold. It’s also added a sense of routine to an otherwise irregular and at times chaotic schedule. But all those benefits aside, it provides a safe space with a positive energy that is free of judgment (despite my initial bitchin’) where I am able to experience the greatest freedom in my adult life from the single act of turning off my mind and relying solely on my physical body to power through, and simply, exist.

In addition to teaching yoga, Vince Smit is the Co-Founder and Creative Director of iRETREAT which offers wellness retreats around the world. St Lucia, Bali and Belize are just some of the exotic destinations that  vacationers will be treated to over the next year, along with a variety of planned activities from yoga and meditation to diving and head-to-toe pampering at the most luxurious spas. This may also be your once-in-a-lifetime chance to rock a coconut bra in a non ironic way.