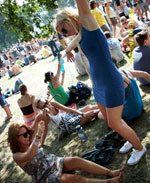 HOW TO: FESTIVAL EXPRESS

by Haley Cullingham
WELL, it’s that time of year again. South By Southwest is over, and you’re planning where your summer music fix is coming from. So, Gorge or Grant Park? Art installations in the desert sun, or the Tennessee heat? Here’s the Festival 411 for Summer 2010.

APRIL 16-18
Coachella Valley Music & Arts Festival
http://www.coachella.com/
Coachella is a great party, and its iconic place in pop culture imagination means that artists are excited to be there, and stoked to be getting back on the festival circuit. Its proximity to LA ensures crazy surprise guests like Scarlett Johansson singing with Jesus and Mary Chain, or Kanye popping up to do a short set after Common. Plus you can play spot-the-Devito. The setting is breathtakingly gorgeous, and you get an early tan. The only downsides? Beer gardens are fenced in-you can’t wander with your booze, and security is mighty tight.

The Uniform: Giant sunglasses, tiny shorts, amazing leather boots, long hair.
The Locale: Empire Polo Field in the Coachella Valley, Indio, CA.
The Trip: Coachella provides an excuse to hit up countless nearby sites of awesomeness. We recommend spending a night camping in nearby Joshua Tree National Park-give yourself a day to hike around. As well, a night in LA is always a must. Plan to go after the festival, so you can stop by Amoeba Music (http://www.amoeba.com/) on Sunset and pick up the albums of all the bands you just fell in love with. LA has countless cheap hostels, and the grit is part of the charm. If you’ve got time, roadtrip up the 101 to San Francisco (give yourself a couple of days to avoid breakneck late night driving and fully enjoy the beachy wilderness.)
The Digs: While there are plenty of places to stay in Indio, from motels to kids renting out condo floors, the best Coachella experience comes from festival camping.
The Tunes: Jay-Z is stopping by, and expect some cameos, which Coachella is famous for. LCD Soundsystem, Vampire Weekend, Passion Pit, Grizzly Bear, She & Him, La Roux,Yeasayer, Sleigh Bells-who just got signed to M.I.A.’s label, and we predict will be huge. Tiesto, MGMT, David Guetta, The Dead Weather, Hot Chip, Major Lazer, Dirty Projectors, 2ManyDJs, Gossip, The xx, Edward Sharpe and the Magnetic Zeros, Girls, Gorillaz, Pavement, Thom Yorke, Phoenix, De La Soul, Spoon, Julian Casablancas, Charlotte Gainsbourg, Yo La Tengo, Deerhunter, Matt & Kim, Miike Snow, Florence and the Machine, Owen Pallet.

Located in the gorgeous, scenic…gorge, Sasquatch! boasts an insane indie lineup-but lives in danger of the wind blowing over the stage.

Ah, Bonnaroo. Hippies, hipsters, mud. Apocalyptic rainstorms, music til dawn. A ferris wheel. Bonnaroo becomes it’s own city on stretches of farm land in Tennessee-and during the festival, the world shrinks to a multicolour adventure of parties on buses, in campgrounds, underneath giant bobbleheads, and of course, at excellent music sets. Bonnaroo is a favourite of most serious festival goers, and has a hippie vibe that can’t be beat. It’s like Coachella’s dirty, tow-headed twin sister who went out west for college and came back with dreads. They always have an awesome collection of local music. AND THE FLAMING LIPS ARE PLAYING DARKSIDE OF THE MOON.

The Easy Rider of summer music festivals. A beautiful location in a fantastic city, within easy skive-off distance of many convenience stores selling you tall cans, sunscreen, burritos, or ponchos. Under the magnificent Chicago skyline, Grant Park stretches green and packed with hip and happy music goers. Lollapalooza is, quite simply, a great freakin’ time.

The Locale: Grant Park, Chicago
The Trip: A great excuse to explore this fantastic city. Book a couple of extra days for museum going, shopping, and city walks.
The Digs: Book your motel. Like, now. We’ve done this a bunch of ways, and let’s just say that sleeping in a Red Roof Inn and taking the train into the city has its charm, but packing 15 kids into a downtown hotel room is way more fun.
The Tunes: Stay…err…tuned. Lolla’s announcing their lineup April 6th-but if year’s past are anything to go by, it should be amazing.