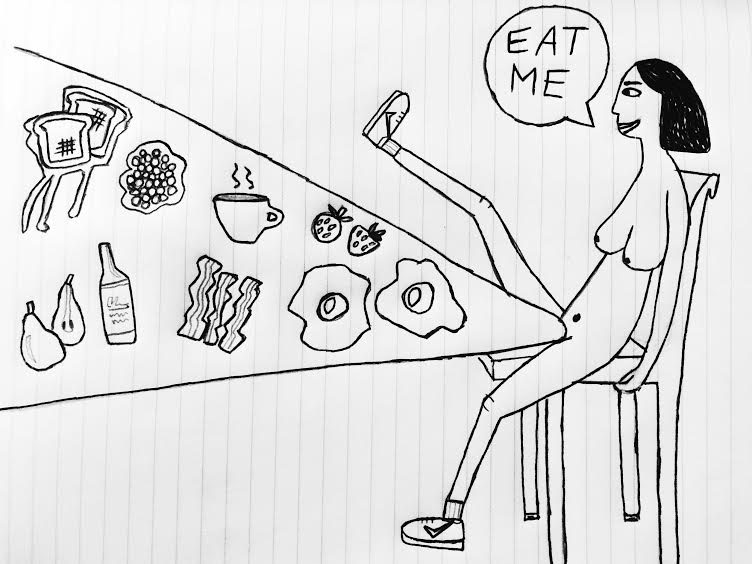 I HAD A FOOD-INDUCED ORGASM IN MONTREAL

Yup, that’s right everybody: I’m a grown woman eating alone, in a restaurant, having an orgasm. Totally normal. Nothing to see here. I’m dining solo and I feel fucking superb! EAT ME.

I repeated this in my head. Dining alone in Montreal, I entertained excuses for the lack of company. God forbid somebody might confront me: “Hey lady, how come you’re eating alone?” – to which I’d respond, “I’m a social outcast with a heavy appetite. Fuck you!” But nobody ever asked. And I was surprised to find myself in the pleasure of my own company with very little expectation for a city I’d never really appreciated until now.

Now before I tell you about my food-induced orgasm, let me start from the beginning.

“Slap me in the face.” Seconds later, he did as he was told. Hard.

I left his place feeling dishevelled, leaving half a bottle of stolen red wine behind. If the police came after me, I’d tell them the truth: “It gave me heart burn, ugh.” Law breaking aside, I had exactly one hour before my bus ride to Montreal at 12:45am; a ticket I booked in a frantic rush that morning. I needed to distract myself from thinking about him, so I set the stage for the bus station in my tipsy imagination: Fluorescent lights. Easy listening radio. Suitcases. Beeps and honks. I could already see the line-up of university sweat pants and oversized headphones that would join me on the midnight express. One hour later, the bus took flight with my neck collapsed forward in a state of unconsciousness. Early the next morning, we pulled into Sherbrooke Station, my memory still fuzzy from the stolen red wine.

Inside an old-fashioned apartment on Avenue Desrocher, I arrived to a kitchen full of complete strangers. Laughing, I bonded with my Airbnb hosts about the Internet like it was invented yesterday. “Airbnb gives me hope for humanity,” the woman next to me announced. She was from Halifax, an artist. The four of us nervously giggled like it was the first day of school. After I brushed my teeth, Gillian, the smiling blonde, recommended I go for breakfast at Le Vieux Velo, a cute spot in Little Italy just ten minutes east. Feeling spontaneous, I went with a ferocious craving for eggs and crappy coffee.

Alone at breakfast. I read my book by Miranda July, The First Bad Man. Quietly, I eavesdropped on dangling conversations nearby: “Hmm,” “Ah ha!” “Merci!” and “Je suis bon!” Two outlandish women sitting next to me coughed up a lung in laughter. Behind me, a very pregnant woman calmed her toddler over a plate of Eggs Benedict. In the corner by the bar, a man sighed loudly while clanking his knife over a plate that could have been a surgery table. With my eyes glued to the ruled paper menu, I ordered rather eagerly: “Hi! I’ll have a standard breakfast with brown toast, over-easy eggs, beans, extra bacon and hash browns!” The coffee tasted exceptionally standard and I made it my priority to take my time, chewing everything as if pretending to be a food critic for The New York Times. A girl can only dream.

Le Vieux Velo set the pace for what quickly turned into a two-day food-induced orgasm. I would eavesdrop, dine solo and drink coffee wherever I could find WiFi and a plug outlet. I discovered new places to eat on Yelp, Trip Advisor and food blogs that awarded stars and checkmarks to locally favoured restaurants. Four stars plus one cash icon – that was my food-orgasm formula. In a thread of dirty words, I neurotically read customer reviews like erotica: Well worth the wait! So fucking good! I’ll certainly come back for more. I’ve never felt THIS satisfied!

Food had never felt so sexy. I needed to eat more.

In the hours that followed, I ate my way into an epiphany. I hadn’t planned on eating so much, but when the opportunity presented itself to try Juliette et Chocolat on Avenue Laurier, I stepped in magnetically with a forceful attraction to something spectacular. I ordered Juliette’s pick – the chèvre chaud salad with mixed greens, sliced pear, warm mini buckwheat crepes topped with goat cheese. I waited eagerly, reading my book to stop myself from listening to the young family next to me fussing over napkins.

Restaurant service felt satisfying and quick like a one-night stand. When the salad arrived, I began to chew every mouthful 3, 4 and 5 times. I had never felt so orally fixated by salad in my entire life. It was sensual, animalistic and romantic. The subtle bitterness of the dressing mixed with leafy greens sprinkled my taste pallet with texture. I savoured the warm continents of buckwheat crepe that blended together with pear in my mouth. Sweet Jesus, I was transcending. The salad had disappeared. I regained consciousness and left the restaurant bright red, blushing like a foolish girl in love.

Outside Restaurant L’Avenue, a chatty line-up of friends and relatives stood outside. Inside a crammed dwelling of tables and graffiti, customers stared wild-eyed at plates smothered in Nutella, runny eggs and fresh fruits. Things moved quickly and servers glided between tables like choreography. I’m not one to wait in line, but Montreal had changed me and I felt determined to eat my way into another orgasm. I already felt aroused by the hype of the “hot spot” breakfast joint; I imagined myself giving a speech at the end of my breakfast: “I waited in line for twenty minutes, I ate my face off and I conquered.” While I waited behind a gaggle of older women, I read a chapter from my book about Open Palm: a self-defence class for women. Within 10 minutes I was OP certified to defend myself against gang members and fully seated drinking coffee. Things were going smoothly.

Like a spoiled six year old, I ordered French Toast, pounded by strawberries and Nutella. When it arrived, my heart turned into a gigantic pulsing strawberry and I thought I was having a heart attack. Six pieces of toast lay collapsed like dominos in a tower of cream cheese, strawberries, Nutella and whipped cream. I didn’t know where to start, so I eagerly stabbed a strawberry and nibbled sheepishly at a corner of the bread dusted in flour. The French Toast dominated me; my appetite became submissive in a state of complete shock. It was me against the French Toast and we were in a foreplay of power.

As if under a microscope, I became transfixed by the whipped cream, melting slowly in a river of syrup that trickled to the outer borders of my plate. With fat pieces of smothered bread, I gently guided my fork to gather strawberry, Nutella and white cream like a hunting weapon. I lost track of time, space and first world problems. What could have been ten minutes felt like three days of chewing. Out of breath, I surrendered after the third piece. Defeated, like a stuffed warrior princess, I couldn’t face the server. Remembering to breathe, I sipped on my water to hold back tears. My tongue tingled with a sweet aftertaste of defeat. Ashamed, I asked the server to pack up the rest of the French Toast to devour later. I grabbed the bill, paralyzed in total takeover.

What started with sex, ended in a food-induced orgasm. I flirted with standard breakfast, made love to salad and was completely dominated by a plate of French Toast. Alone, eating by myself in Montreal, I drank shitty coffee and experienced food like a lover.