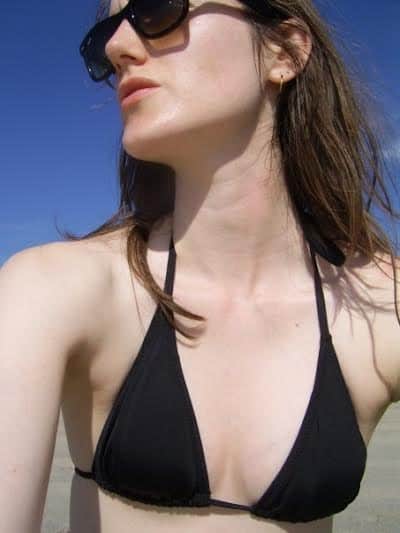 "this ambivalence about my As had been lurking around for a while before it reared its ugly insecure head during the exact moment they were finally getting some respect and TLC. And to make it even worse, during the second and third times with this new guy, I kept my shirt on."

I Have Small Tits and I’m OK With That

Last week Kendall Jenner (she’s part of the Kardashian klan and is some kind of “model” and it’s totally OK if you don’t know who she is, don’t Google) made bloggy headlines when she sported a sweatshirt emblazoned with the statement: “I Have No Tits.” When older sis Kim Kardashian straddled Kanye/a motorcycle backwards, I gave exactly zero fucks. But this, THIS statement piece made me smile and nod and go all, “You work that American Apparel sweatshirt, girl” because, you see, I also have no tits.

Of course, there’s “something” there, as a fella with whom I was in the middle of a tryst kindly pointed out. We were all hot and heavy and he was asking me what I liked, including said tits, and I blurted out, “Well, there’s nothing there, anyway!” The director’s cut version of my Rain Man-like exclamation would probably continue with: “There are no mountains to climb, just pointless valleys to meander with, sir. I mean, you can roam but don’t set up camp because you’ll probably be disappointed anyway. Carry on, if you must. (sigh).”

I had to ask myself—who blurts something like that in the middle of foreplay? Who thinks that way?? I asked myself this question then, and again later on, and the answer seems obvious now: someone who has some issues with her itty bitties.

I never wanted big boobs. They always seemed like hard work to me. And heavy. And, just, well, inescapable. Like, if I wore a tank top, it would be a “tank top with boobs” and not just a tank top, you know? They’re a commitment.

I had a B-cup when I was first developing—the B was more for Baby Fat than Breasts—and once that stuff melted off, I was left with my current 34As. For a while I was all about making them As For Effort, thanks to a nightly push-up regimen and fancy, push-up bras. I knew I wasn’t going to win any wet T-shirt contests, but I could still get my motorboat on. I really liked my small chest. I didn’t know any other way to be, of course, but I thought I had cute, perky breasts that were worth celebrating. Back then, when I was getting busy with a guy, my shirt was the first thing to go. I didn’t care! This was who I was—Small Boobs Brianne!

Then, something changed last year. I started to second-guess my sex appeal. Maybe it was because I was going through a dry spell, maybe I was a little envious of my friend, a fellow small chest-er, who now had pregnancy boobs (and thus had the whole mother/goddess thing going on to boot) or maybe it was because the idea of “bikini season” is pretty laughable when it comes to small boobs (really, a couple of Band-Aids, though not as aesthetically pleasing, can do the job). Whatever it was, I found myself at a plastic surgeon’s office inquiring about getting a boob job. I wasn’t entirely serious (I certainly didn’t have the fund$ in my bank account), but I was curious about the procedure and I wanted to know the 411, if, perhaps, one day, I would want to enhance my bust line.

However it seems on that day I had forgotten the most important part about me when it comes to surgery and hospitals and blood: that I’m an intense hypochondriac. The moment the doc started talking about cutting through my armpit and… honestly I don’t remember what else she said because I was gone at “cutting” and “armpit”. So, there it was. I was never going to have big boobs. The kind of boobs that fall into your armpits when you lie down were going to remain out of my reach unless I let someone cut into my armpit… no! God no.

So this ambivalence about my As had been lurking around for a while before it reared its ugly insecure head during the exact moment they were finally getting some respect and TLC. And to make it even worse, during the second and third times with this new guy, I kept my shirt on. “Small Boobs Brianne” would not be pleased. It was, therefore, extremely serendipitous timing when I saw that pic of Kendall Jenner, sporting her sweatshirt loudly and proudly, and I thought: Yes, that’s what you do! You love what you already have—no shame, no apologies. Show ‘em what your mama gave you (which, yeah, in my case, it really is just a matter of genetics).

So, my fellow itty bitty gals, in the spirit of Kendall Jenner (something I will never say again in the history of my lifetime, promise), here’s quick rundown on a few of the things that make small boobs so awesome:

1. They’re Cute – They really are. They’re happy and friendly and, really, just adorable.

2. You Feel More Pleasure – Despite my “there’s nothing there!” protest, small boobs are actually easier to stimulate because there’s less tissue in between your partner’s hands and those sensitive nerve endings. So be sure to have your partner cop a feel.

3. You Can Wear Something Strapless And Low-Cut – …and feel comfortable that your “girls” are not stealing your thunder. No readjusting and pulling at your top all night. Think Audrey Hepburn elegance (she was also small chested, by the way).

4. They’re Easier to Check Out (Medically) – Below a C? Self-exams are a breeze!

5. You Can Go Bra-less! – It’s pretty exhilarating to grab a coffee or run errands without wearing a bra. It’s like your own dirty sexy secret. (Remember how often Calista Flockhart went braless on “Ally McBeal”? That nipple action was hot, no?) But, word to the wise: don’t make it a habit because our girls can sag just like our bigger sisters’.

And, do me a solid: if your partner asks you what you like up there, please, for the love of Kate Moss/Keira Knightley/Cara Delevingne (and all the other pretty hot A-cuppers), just say what you like, and have fun!