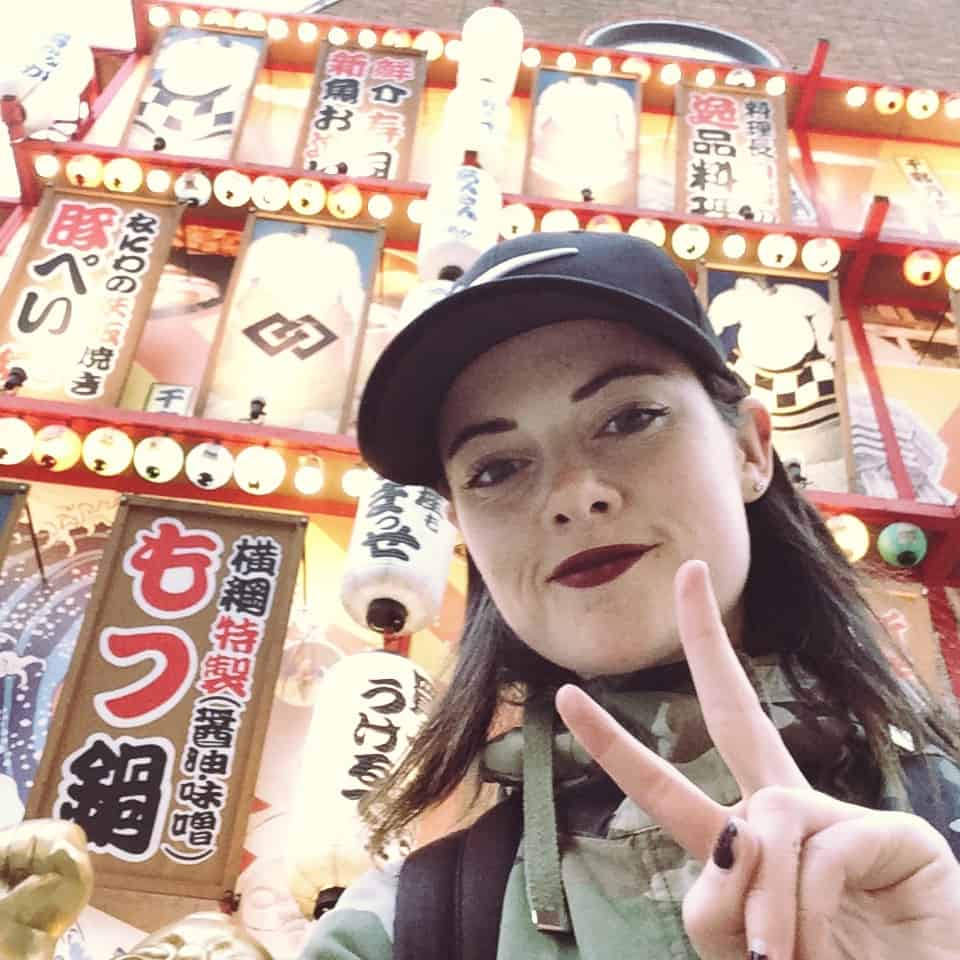 I went to Japan alone and this is what happened

Every year, I book a solo vacation that puts me on the brink of a catastrophic breakdown. Don’t ask me why I do this to myself, but it’s a birthday tradition that I loathe, love and live for. The rule of thumb is this: I have to pick a city that’s gigantic, claustrophobic and filled with cool stuff. The end point: to put myself in an incredibly impossible situation of self-reliance and vulnerability to test my personal threshold and willingness to survive. Feeling especially forthright, I booked a one-week solo trip to Japan.

Pre-trip death confrontation: Death! It’s soooo nice to meet you. Well, life has been pretty funny so far. I guess it’s okay if I die now. Bye forever. I’m totally cool with you. I love death! Bring on the death! Extra side serving of RIP, please. Double death sauce. Please and thanks. Dying now. BRB & RIP. Shhhh! Snap out of it, Sarah.

Now back to my story.

Hidden within a strip of seedy dance clubs, amusement park lights and Coca-Cola vending machines, my hotel awaited me at the end of a street with no name. There are no street signs in Osaka, just neighbourhoods, numbers and 7/11s. So you can imagine how intimidated I was after flying; scared shitless, aloof, with the smell of curry in the air. Rest assured, after aggressive Google Mapping, I found my hotel and was very pleased with myself for being so clever. Sure, Google helped a bit, but whatever.

For those of you who don’t know, Hotel Yamakyu is a sex hotel – something I abruptly came to discover upon my arrival. Politely smiling, an old woman with missing teeth stood behind a counter. We didn’t understand each other, but it didn’t matter. I had seen enough movies to know that this is the part where I give her cash and she gives me the room keys. And so it went. She babbled, I smiled, and I walked into a casket-sized elevator with a furry blue carpet and stained mirrors. Inside my bedroom, the décor read like a story plot: Poolside playboy goes to space, never returns. Complimentary pantone pink and purple radiated retro, and I felt like a porn star. It was glamorous, trashy and powerful. 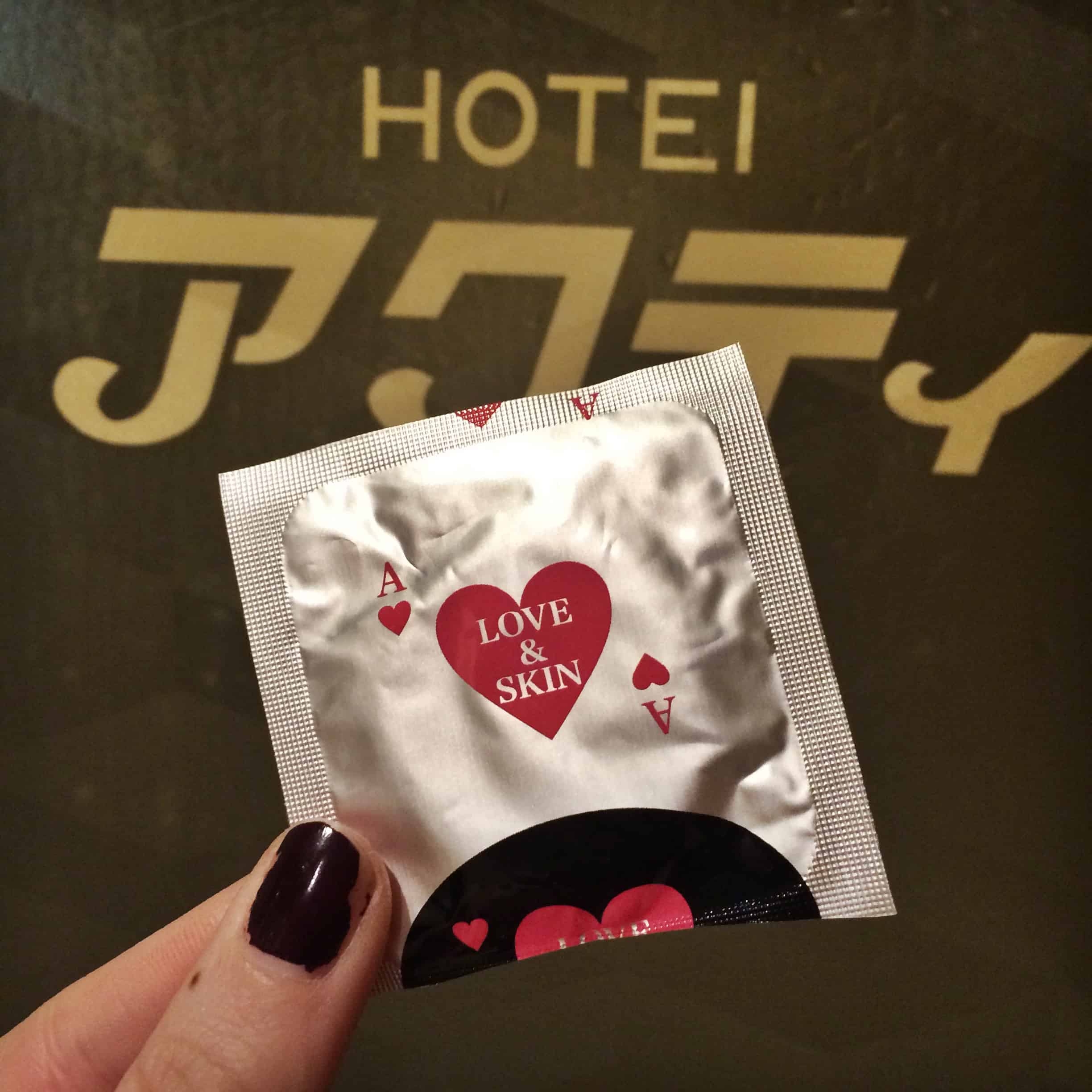 The next morning, I woke up with a UTI. Now before I go any further, let me tell you – if you’ve ever been sick in a foreign country, you’ll understand when I say this: OMFG! HOW COULD THIS HAPPEN TO ME! SO UNFAIR! But it did happen. And within twenty-four hours of leaving Toronto, I discovered that my vagina was in a state of all-hell emergency.

This is around the time I decided that I wasn’t ready to die and I would be damned if a UTI would be the reason I disappear in Japan. What would the old woman with missing teeth tell my parents when she found my rotting body in a sex hotel in Osaka? Surely, this happens all the time. I’m in a sex hotel that’s poolside playboy themed for crying out loud! Yeast infections and UTIs are complimentary with room bookings, aren’t they? This is the part of my trip when I had a mini-meltdown and cried a little bit in my sex hotel. And so it goes.

Tired of drinking water, I went to the streets of Osaka. Smart, sophisticated, brilliant Sarah devised a plan to translate English to Japanese on my iPhone and show it to someone who at a drugstore (Family Mart, it’s called). Ah ha! Surely, I could find some medical assistance with the help of technology. Message: Kon’nichiwa. My vagina is burning and I need medical assistance. Anti-itch cream. Antibiotics. Vagina on fire. Female emergency. Help. Not ready to die. Please assist me. My cryptic (poorly translated) message resulted in a state of laughter. I tried pointing to my vagina with an expression on my face that hinted pain, discomfort, burning and vulnerability, but the language barrier made things impossible, so I rubbed my belly dramatically with teary eyes. Without Japanese medical insurance or an English-speaking doctor, nobody would help me. So I sat outside a clinic and read a chapter of Maggie Nelson’s Argonauts, reading about the queerness of pregnancy. Soonish, a drugstore lady handed me a cream that said “feminine” on it. Paired with water, a handful of Advil and some extra cranberry pills in my backpack, my vagina SOS eased to the point of less-painful-okay. Looking back, it’s embarrassing to think that I spent the majority of my time in Osaka loyally hunting for vagina cream. But that’s okay. Everything happens for a reason, doesn’t it? Maybe I needed to go to Japan to appreciate cranberry pills in a way I would have never expected. Because side note: JAPAN DOESN’T SELL CRANBERRY PILLS.

Arriving in Tokyo was the best thing that could have happened to me after my near-death yeast infection. Osaka was tainted with my emotional confrontation with death and utter helplessness as a fragile, naïve and completely useless human being. My family, on the other side of world, remained distressed after I texted post-death protocol, insisting that my ashes be sprinkled in the Jacuzzi of my Osaka sex hotel. Things were starting to look up, despite the early set back of burning urination. Three hours on the JR Train from Osaka to Tokyo, I returned to the vacation I had planned all along. Intimidated by Japan transit, it took me a day or two before I got familiar with station names, connecting trains, directions and subway lines. Give or take a few pauses, deep breaths, and claustrophobic moments in Tokyo Station rush hour, I found my way just fine and emerged a woman of the world; JR Pass in hand with a flushed look on my face. I was doing it. I was in Japan, alone, and I hadn’t died yet. A miracle.

The extraordinary thing about travelling alone in a country where you don’t speak the language is how easy communication is without language. Surely, without words, this might be difficult to do. But to my honest surprise, it wasn’t. I pointed, smiled, gestured with my hands and nodded through rituals of social interactions. Speaking wasn’t necessary, and after two days of travel, I lost my voice for the simple reason that I didn’t need to use it. I wrote instead, happily at that, for days on end.

WALKING FOR MILES IN TOKYO

In Tokyo, I wandered through the neon posters of Electric Town, the crowded alleys of the Red Light District, and through quiet strips of city along the JR line. I walked until my legs hurt and my feet stank, and my head pounded. It rained a little, between sun and clouds, and against the twelve-hour time difference, I lost myself in a daydream of sight-seeing and exploring. My mind’s battery power was endless. Beyond the stress, my head was rushing with ideas, pictures and thoughts about what I wanted to do next. Tokyo is a video game – flashy, majestic and full of buzzing and beeping sounds. I people watched, snapped pictures, and couldn’t help but awe at the circus of city life. Things were happening around me, and I felt willfully invisible. The most powerful feeling of all, if you ask me. 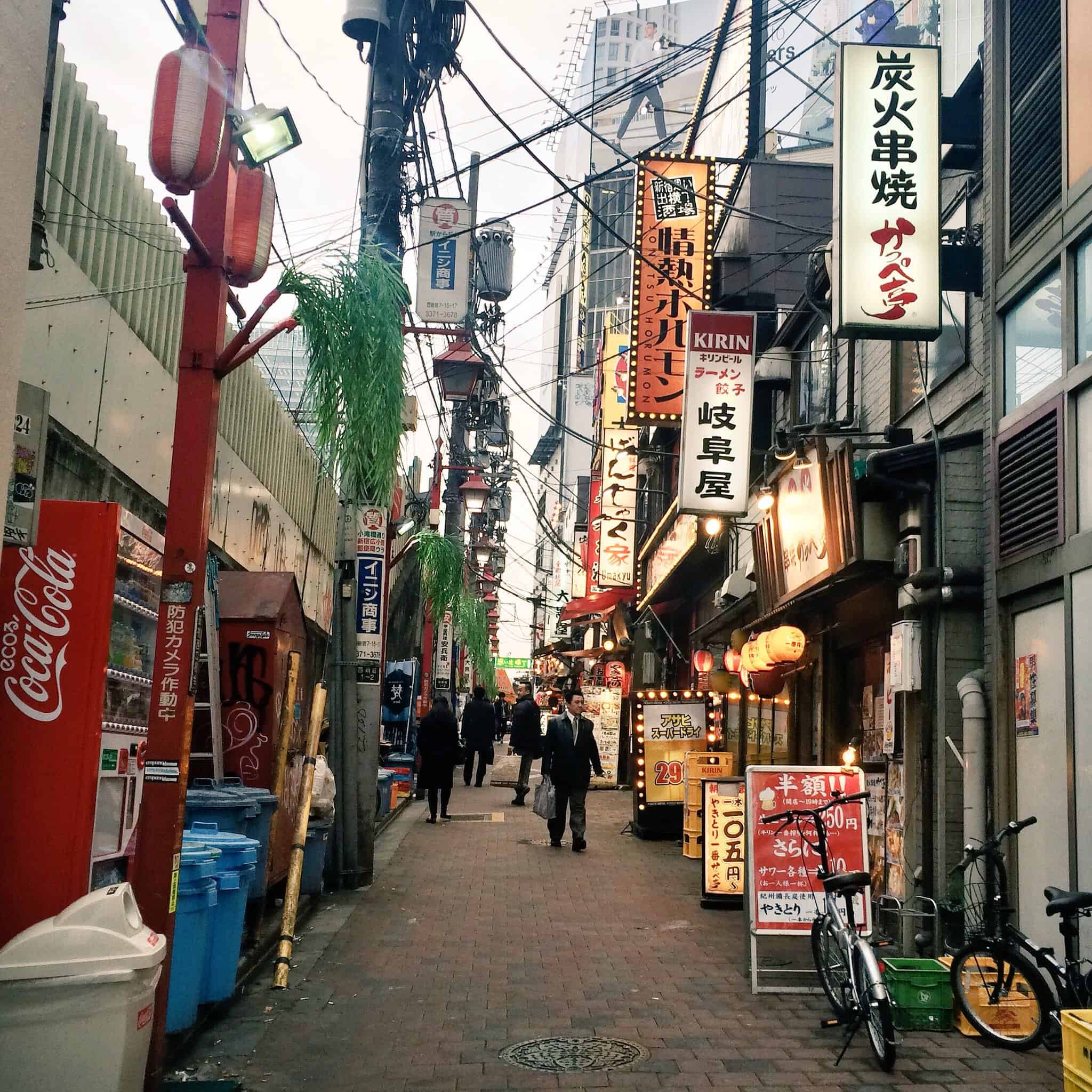 PEN AND PAPER DAY IN KYOTO

It’s liberating to write in public, in close spaces with strangers, because I don’t care if strangers read my writing when I’m travelling in foreign places. Back on the road for a daytrip to Kyoto, I left my laptop at the hotel, to read and write in an afternoon of temple-hopping and park visits. It was day five of my trip and with no particular schedule in mind, I trekked the Philosopher’s Path and discovered a stray cat sanctuary. Slurping coffee from a can, I walked in single-file behind a parade of people at Nishiki Market, an alleyway of Japanese cuisine, raw foods and desserts. I wrote about my yeast infection, drew a picture of the JR Train, and read The Argonauts from start to finish on my commute. Easily the best day of my entire trip in Japan. 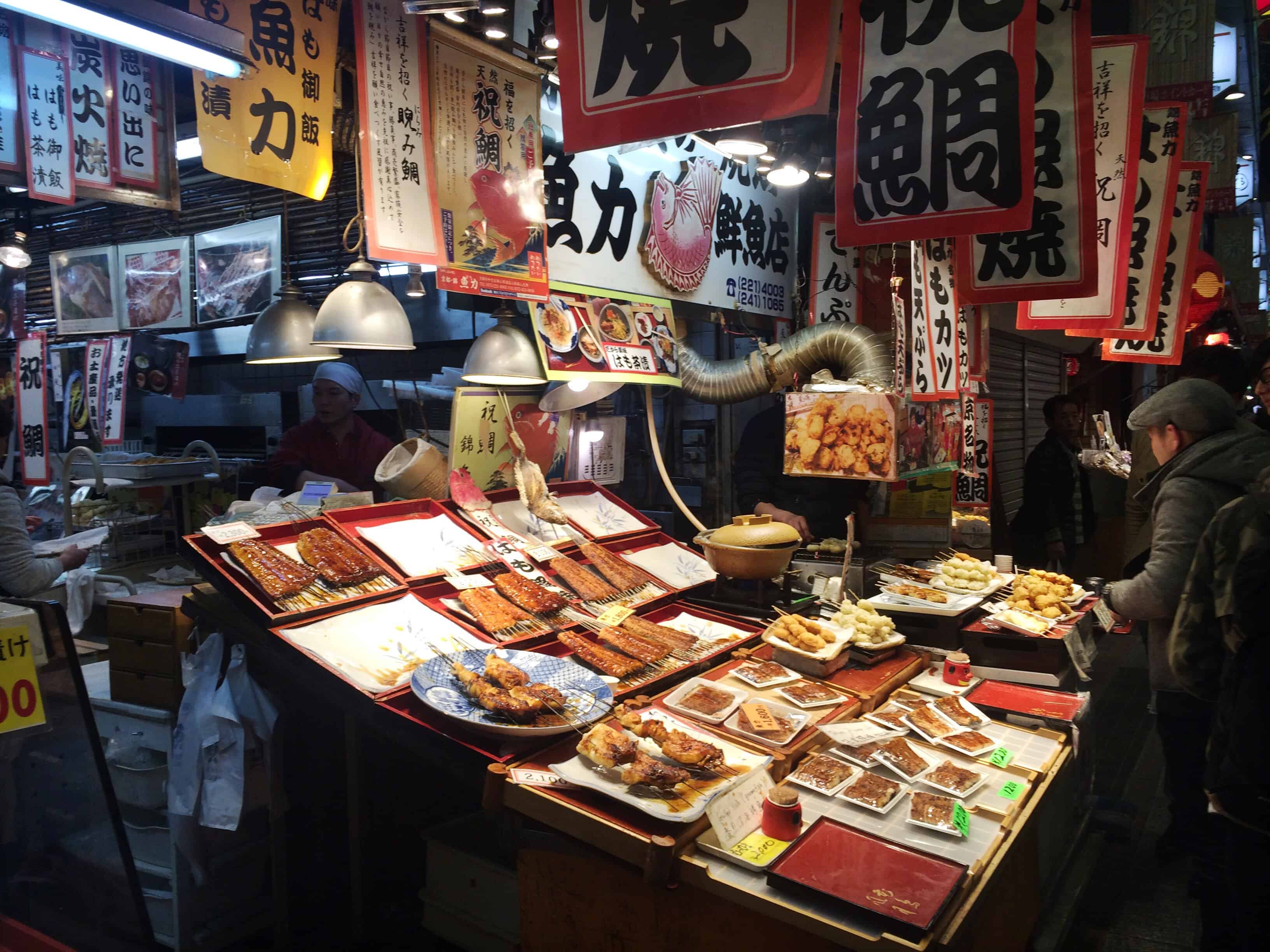 Within seven days, I had seemingly upgraded from a seedy sex hotel to a one-night stand in a tower that felt like a playboy mansion. Like all my hotel bookings, I don’t tend to notice things until I’m standing inside the hotel room. This time, I found myself looking through a window that screen-grabbed the entire city of Osaka. The view was something from a movie: a Grand Canyon of flashing lights and towers that stretched for months. The lights blinked and cars moved, the sounds of trains, busses and cars echoed from below. It was everything I could ever ask for in my last night in Japan, accompanied by three tall cans of Asahi and a box of strawberry POCKY. I fell asleep, already in a dream. 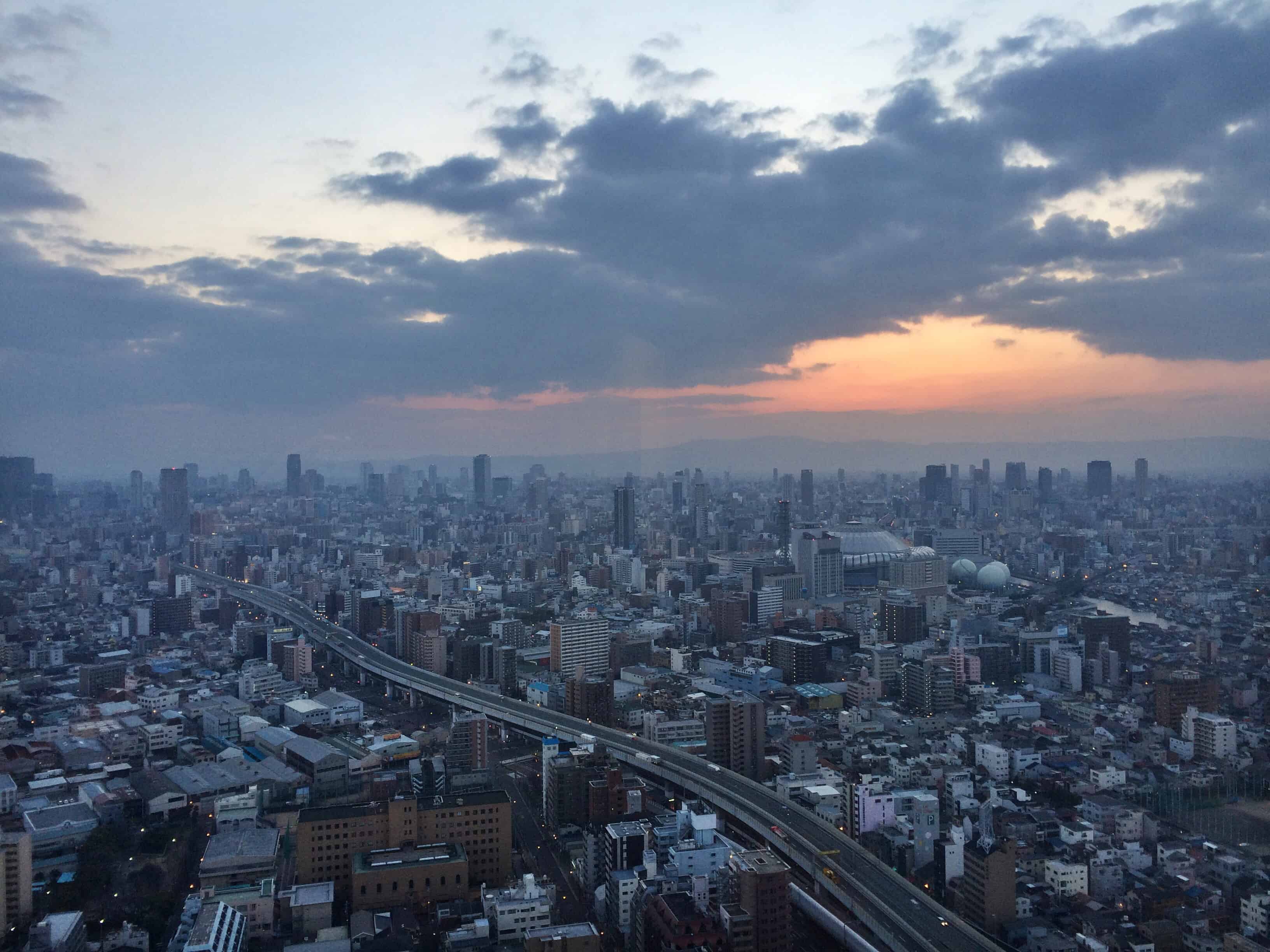 Flipping through the dog ears of my Lonely Planet Japan guide, my hair is greasy with adventure and my nails need to be clipped. For a week, I made my way alone and made it out alive. I panicked, cried, swore under my breath, slapped my head a few times and slept like a baby in the wake of extreme stress and physical pain. I didn’t know what I was looking for when I booked my trip to Japan, but after surviving a yeast infection, hugging a toothless woman in my sex hotel, and wandering for hours on end in Tokyo and Kyoto, I collected a catalogue of memories that I’ll hold with me for the rest of my life. Yeast infection included.