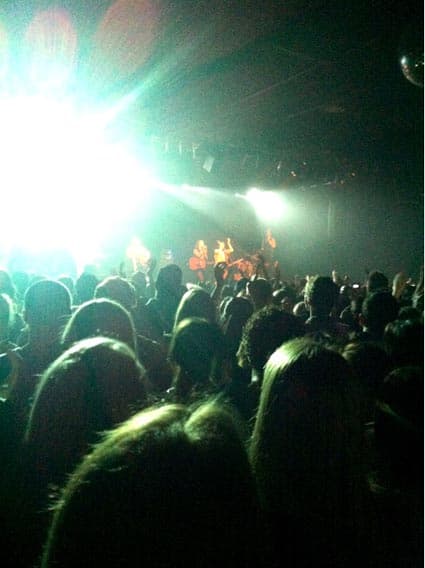 As if you needed more proof that Iceland is oozing with musical talent: enter singer/pianist Soley and indie folk band Of Monsters and Men. Both performed last Friday in the second of two sold out Toronto shows and did not disappoint a packed Kool Haus.

Soley opened the night with a collection of hauntingly beautiful songs that had several people around me asking one another, “Who is this girl?!” Between songs, she thanked people for showing up early to watch her perform and expressed her love for Toronto a statement that obviously garnered plenty of cheers. (I honestly could have just listened to her talk…her accent is the best.) Maybe it’s her lyrics, or the dramatic piano pieces, but something about Soley’s music makes me feel as though I’m in a film noir. Her 30-minute set ended with “I’ll Drown,” by far my favourite song off We Sink, her full-length debut; a song that, like it’s subject matter, seemed to render the audience speechless.

With song titles like “Mountain Sound” and “Lakehouse”, I expected a sea of plaid shirts and beards to show up for Of Monsters and Men’s set but, surprisingly, that wasn’t the case. They’re a band that appeals to many, which explains the rapid success they’ve experienced. The six-piece band exploded onto the music scene in the summer of 2011 with their single “Little Talks” off debut album My Head Is an Animal and haven’t slowed down since. Their set at the Kool Haus included nearly every song off that album as well as a cover of the Yeah Yeah Yeahs’ “Skeletons.” The singles were obvious favourites of the audience, but as their 90-minute set proved there is not one Of Monsters and Men song unworthy of an epic sing-a-long.