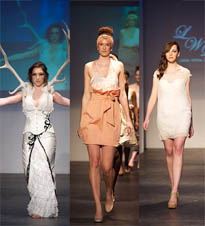 For anyone who’s used to a typical fashion week presentation, Toronto Alternative Fashion Week (FAT) can be a bit of a shock; it’s not often that you see elaborately choreographed light saber fights (Moon BUrn), mummified models and hints of beloved Dynasty villain Alexis Carrington (Rachel Sin) under the same roof. FAT is a curious aesthetic mixture that showcases  new and alternative young designers who may not have the chance to showcase at larger venues such as LG fashion week.

Sustainable and locally made clothing was a trend emphasized this year. For many of the designers at FAT, the awareness of how their clothes impact the environment, while still maintaining their artistic integrity, was something that was explored.

“I think it’s really important [as a designer] to think about how your processes and all the materials you use,. All the products you make impact the rest of the world…that’s a huge, huge thing–and that’s an important thing to have in your mind…and still explore your creativity.” says designer Heidi Ackerman.

Designers such as the team behind Little.White.Dress, Jessica van Enckevort and Alexandra Wilson, are challenging the notion that sustainability is dull with their line of flirty bridal and cocktail dresses.

“There’s a huge stigma attached to sustainable design, that it’s kind of shapeless and boring, and we wanted to show people [that it can be the opposite].”  says van Enckevort.

In an interesting twist, the Mackenzie Jones show illustrated how animal products such as fur can be harvested and used in a way that is local and cruelty-free. Says designer Megan Mackenzie Jones,

“I need[ed] to know [where my fabrics] are coming from…I want to know that where I get my stuff from is an ethical source. I wanted to find people who are still treating trapping as a way of life.”

The goal of FAT is to reconceptualize the way we think about fashion. Young, untested designers are allowed to present their clothes to fashion insiders and the general public. When looking at these collections, it’s fascinating to watch their thought process. It can either be awe-inspiring, or just plain disappointing. Collections such as the Ryerson Fashion School could have benefited from a ruthless editorial eye; this would allow the key details of construction and workmanship to shine, rather than being lost in a garment that is overpoweringly underwhelming.

Fabric choice is essential to any garment–with fine bamboo knits, billowing chiffons, woods, and plastics–FAT gave us a tactile thrill. Not so thrilling? Egregious use of satin. Satin is a notoriously tricky fabric to work with. When used correctly, the effect is nothing short of regal (Mackenzie Jones), but when wielded with less care, the result can be a tad tacky prom dress (Rachel Sin).

Perhaps paper would have been a better choice? Breeyn McCarney’s intricate dresses stole the show with LED lights, intricate lace cut outs, and models acting as robotic dolls with a hint of sad Poirrot.