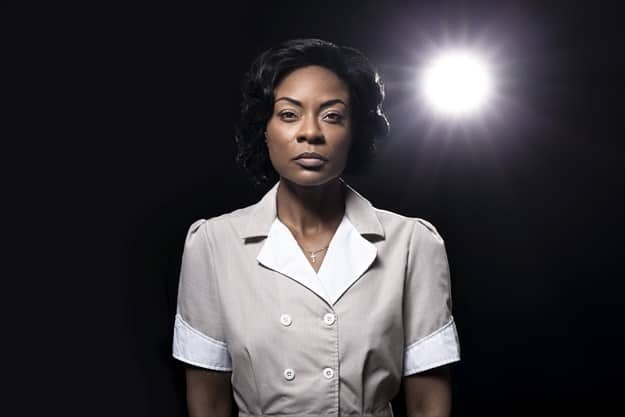 Taking on the role of Caroline in Tony Kushner’s award-winning musical, Caroline, Or Change is a big switch for Canada’s R&B Queen, Jully Black. However, she’s viewed the challenge as less of a genre switch than an opportunity to explore her legacy. “My mom was a domestic in Jamaica,” says Black.”She worked for a white family, and they afforded her the opportunity to have the $200 she needed to get to Canada—that’s all she needed back in 1968.”

Set in Louisiana in 1963, against the backdrop of the Kennedy assassination and the Civil Rights Movement, Caroline, Or Change tells the story of a Black maid working for a Jewish family, getting paid a paltry $30 a week, while trying to balance her own children as a single mom.

Having lost her mother, Agatha, in 2017, the role of Caroline allowed Jully to connect to her mom’s history in a powerful way, “As I stepped into Caroline’s life, I became her. This isn’t pretend.”

It’s a role that Black has spent a year working on, and one that forced her to go deep. The process has been emotionally heavy, but for Black, the hardest part of the role was sitting with the feelings of frustration that her character experienced, or the inability to move beyond her difficult circumstances. “The most challenging part is feeling her be stuck. That feeling of being stuck, I relate to that – in the music business. I’ve had certain moments in my career where I’ve felt stuck.”

While set in the 1960’s, in the Deep South, the story of Caroline, Or Change is a universal one, which—even today—continues to play out all around us, “I realize that this story is still happening,” says Black, “there are other ethnicities raising white babies.”

Black views the stirring production as a teaching piece. “I hope there’s sympathy, to hear how [Caroline] felt, more so than what she was doing. A lot of people focus on the doing and forget that there’s a person there.”

Caroline, Or Change is playing at Winter Garden Theatre until February 15. Get your tickets now.