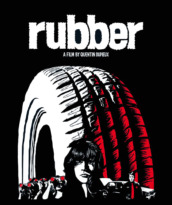 by Jasmine Soucy
So you’re sitting in a movie theatre waiting patiently for your feature-film of choice to start. Actually, it isn’t really a feature-film per se, it’s a two hour-long compilation of short films. Also, forget waiting patiently; truth is you are witnessing a short pre-show montage largely consisting of 80’s music videos and Lionel Ritchie dancing (on the ceiling). The compilation’s organizer then comes out (of nowhere) to discuss the talent and motivation behind these short films. Oh, one more thing: the organizer pauses this introduction to call a seemingly-random usher to the front of the theatre who promptly proceeds to (brace yourself) PROPOSE to his girlfriend (!) …conveniently she’s been seated in the front row the entire time. A few teary handshakes and theatre-wide rounds of applause later, your short-film compilation of choice begins. Okay okay, so you are not actually sitting in a movie theatre. You’re sitting in the Hall Auditorium at Concordia University. And this present string of events that would possibly seem quite odd to the normal movie goer barely fazes you. This is because you are anything but a normal movie goer – you, my friend, are a Fantasia festival attendee.

The compilation I saw that night, which featured a mix of animated and live action English and French shorts, exemplifies what you can expect from this festival: diverse material that is often interesting and regularly hilarious (ahem, YouTube Jack Chop). Highlights include Rubber, a film about a psychotic tire (yes, tire) with psycho-kinetic powers, The Revenant, a bromance- meets-Army of Darkness piece, and Birdemic: Shock and Terror, which is… exactly what you’d expect (a.k.a. so bad that it’s good).

A key, if not central, achievement of the Fantasia festival is the exposure it gives to films like this, the type of which they may not enjoy in more mainstream cinema due to their quirky and über-campy nature. Don’t get me wrong, I do enjoy watching rubber tires mentally obliterate squirrels and beer bottles just as much as the next girl, but is there summer blockbuster-potential here? Sadly, I have my doubts. This home Fantasia provides for the sci-fi brand of film also acts as a home for its counterpart: the (notorious) sci-fi fan. Wonderful as it is, this reality also presents the only problematic aspect of Fantasia. Less voracious sci-fi followers, like you , and me, and anyone else who thought twice about choosing to see Inception over seeing Day and Knight, can be somewhat put off by this audience base. “How am I supposed to stand in line for a film with a bunch of sci-fi junkies?”, you may ask yourself. “I mean, they’re practically their own subculture, its intimidating!” Well, being an infrequent movie-goer and an even more faint-hearted critic myself, I was just a little inclined to share in these reservations. What I quickly realized however, is that they’re based on a bit of a misconception. Yes, Fantasia fans do love Science Fiction. Do they ever. But this is totally inclusive, not exclusive.

I realized this during the pre-show marriage proposal. The now-engaged usher who proposed to his girlfriend is actually a long-time Fantasia volunteer whose dedication to the festival earned him this place in the spotlight. Now, not only a few, not just half, but, the actual majority of the audience knew and recognized this guy and were there with him all the way with their applause and cheers. No one minded the delay before showtime, no one was wondering who this guy thought he was, and most of all no one was wondering who all these clapping audience members thought they were giving some stranger a standing ovation. Audience members, whether they were wearing a Labyrinth t-shirt or an Ed Hardy hat (alright, that’s a reach) were genuinely excited to be witnessing this. And that’s what Fantasia is about: the experience. You don’t have to be a sci-fi junkie, it doesn’t even necessarily help. Fantasia succeeds in being a festival for everyone; you’ve just got to be there.

Fantasia runs until the 28th of July, so go while you still can! For the festival schedule, check out http://www.fantasiafestival.com/2010/en/films/