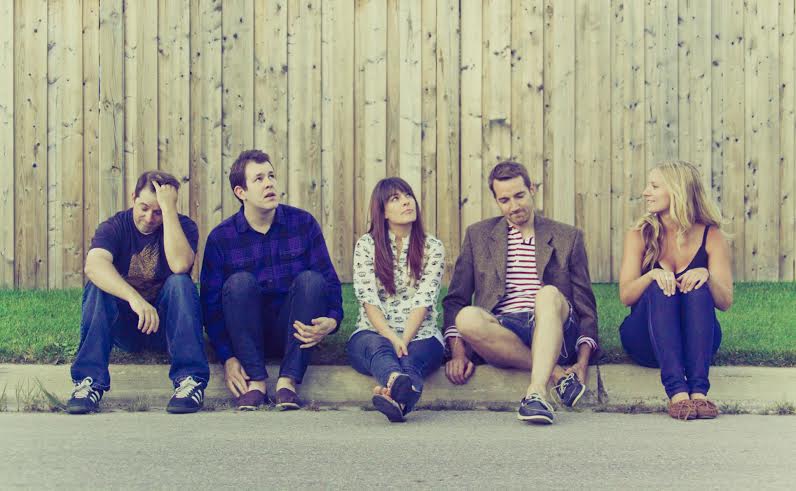 Sound the alarm! We’ve got a doozy of an Indie Radar this May, it’s Toronto’s shimmery pop synthesizer stars – Fitness Club Fiasco! Though their name might suggest they met in a YMCA accident, perhaps involving multiple treadmills malfunctioning simultaneously, creating a sweaty pile-up of gym fanatics who suddenly realized their iPods were all blaring Olivia Newton-John’s “Let’s Get Physical”, however the real story began in the UK, where they released two singles through the London-based label Something in Construction. A few years down the road they relocated to the Big Smoke, added a couple new members to the mix, and got to work making Canada take notice of their fresh sound.

Their music has been compared to Postal Service, The Killers, MGMT, and Pet Shop Boys. The BBC’s Steve Lamacq has described their sound as both twinkly and poignant, capturing a sense of optimism and melancholy. Their live shows are a joyous occasion, plain and simple! They make you smile like the first day of summer, and move like you’ve got a serious case of dance-fever.

Lately, the band has been stirring up a lot of attention through the CBC Searchlight Competition. Your friends’ bands have probably been flooding your Facebook news feed with posts about this contest, which was a nationwide search for the best new musical talent. By mass online voting, and the consideration of a panel of judges, one band would win 20,000 worth of equipment, a spot in the CBC music festival, and exposure up the wazoo. Out of thousands of bands across the country, FCF made it through the voting rounds again and again, and thanks to the support of judge Kardinal Offishall, they found themselves in the Top 4 nation-wide!

Like true pros, FCF has goodies to deliver to their fans, old and new, after all the latest hype has been built. They’ve got a new single being released June 3rd, which will be followed by a release party on June 6th at Sneaky Dee’s! But we couldn’t wait til then—we caught up with the band to get the inside scoop on the new single, their musical guilty pleasures, and more.

SDTC: How would you describe your music?
People say our sound is fun. But whenever I hear that I can’t help but think of Jessica Parker commenting on shoes in Sex in the City. I like to think that our music is “fun and melancholic” or funancholic. It’s synth-pop with a dash of overcast.

What can fans expect from the upcoming single?
“Hades” has morphed throughout the recording process so it sounds quite different from the live rendition. It has moments of bright synth-pop but with a little melancholy throughout. It’s a bassy, slower track, that features spacey guitars and warm synth pads throughout. It’s a song I wrote for my brother-in-law who’s been fighting cancer for a couple of years now. So many people have to deal with cancer or have someone they love who’s is going through it. I hope this song connects with a lot of these people.

What’s your guilty pleasure music?
My guilty pleasure is definitely Enya. My mom had some of her albums lying around and one day I took “The Best of Enya” in my discman on the bus to school – I still can’t put that album down!

Describe the environment that you write your songs in.
I write them in the heart of Grey County, RR3 Ayton. I don’t think anyone knows what to do with rural routes but that’s where the songs are written, in our one room school house that was built in 1875. Most people say there’s nothing to do in the country and I think that’s what I like about it – it’s peaceful and inspiring, a great environment to write in. It’s situated in the middle of farmland, with a koi pond in the back yard (we bought it off a retired couple). I like to write music on the days that I don’t have any supply teaching when it’s just me and our two ginger cats, Gigi and Cecil.