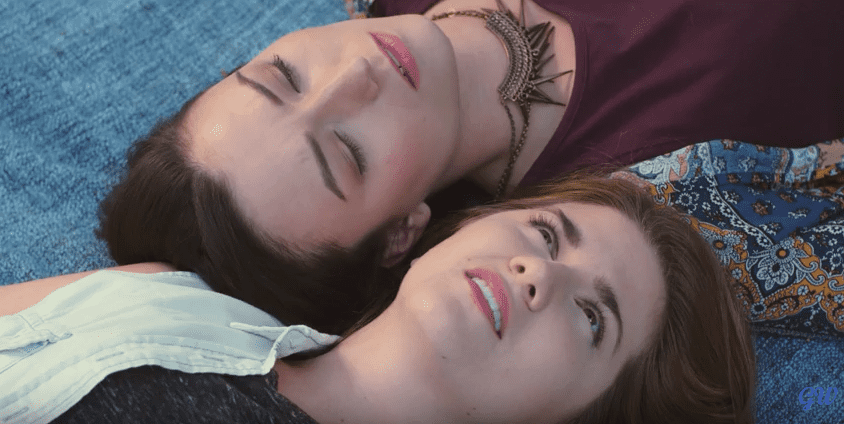 Inside Out Filmmakers: Growing Up and Coming Out (Online) with Almost Adults’ Sarah Rotella

Best friends, recent grads, internship stress, and SO MANY FEELINGS: this homegrown flick that follows Mackenzie (Elise Bauman) and Cassie (Natasha Negovanlis) was shot in Toronto and pretty much mirrors chapters of our lives (especially since one of them is an avid blogger). Sarah Rotella’s Almost Adults premieres this Saturday at Inside Out and is primed to be a festival favourite. We caught up with the Toronto filmmaker to ask her about everything from location scouting to femme erasure.

Cassie struggles a lot with wanting to live a creative life vs. setting out on the path that was prescribed to her. Did you have a similar experience while getting into filmmaking?

I definitely feel like the struggle between a “traditional” life vs. creating your own path is universal for Generation Y, since we preceded a generation that had endless job opportunities. If I want a job, I need to create that job for myself, whether it’s creating content for YouTube, directing a branded web series, or crowd funding a feature film. There’s no prescribed path to becoming a filmmaker, and I feel like I have a bit of Cassie in me when I follow what makes me passionate.

We love the wardrobe. Where did you source all the costumes?

Jennifer Soutar was our amazing costume designer on the film. During pre-production, we met to chat about the characters and their personalities, and from those conversations she went off and created their individual looks. We also wanted to add humour anywhere we could, so we made sure to include some extra loud pieces that still make me laugh.

Could you expand on femme erasure within certain queer spaces and how it relates to Mackenzie’s drive to experiment?

In the film, there’s a running joke with characters calling Mackenzie a “hundred footer,” which means that you can tell she’s gay from a hundred feet away. But when you look at Mackenzie, she is very much a femme lesbian and we wanted to show that her queer-ness comes from who she’s attracted to, not how she looks.

The film was shot in Toronto. Where was the most difficult place to get filming clearance? What was your favourite location?

Half of our days were spent filming in Cassie and Mackenzie’s apartment and the other half were spent at various locations in Toronto. With our limited budget, the university campus was the most difficult to get because they charge huge fees, but that’s the one of the perks of having a great producer. She was able to negotiate a fee that worked with our budget. My favourite location was Cassie and Mackenzie’s apartment because being crammed inside with the entire cast and crew for six days really brought everyone together and made it feel like home.

The dialogue resembled a conversation with my own best friend. How do you manage to write lines for characters that sound so authentic?

That’s what the film’s writer, Adrianna DiLonardo, is exceptional at. She gives characters distinct and authentic voices. Our crew was very passionate about the script and we were able to hire people we otherwise couldn’t afford because they loved the story and the dialogue. On set, I could ask Adrianna to add or re-write lines and she would come up with jokes in minutes that were funnier than the original. Having a talented writer made everyone’s job easier and I really can’t praise her enough.