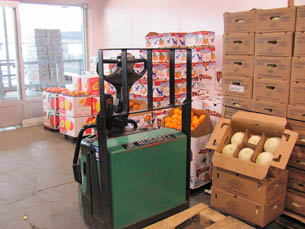 Inside The Ontario Food Terminal

By Haley Cullingham
If you look to your right while rolling west along the Gardiner Expressway, you’ll see an endless line of silver trucks, parked under names like Gambles Ontario Produce. An ad for fresh Ontario mushrooms stands atop a tall sign, and a warehouse stretches behind the parking lot. Burly men wander, small as ants, around the large trucks, pushing flats of vegetables on dollies. For most Torontonians, this is the closest they’ll ever get to where their food comes from.

For 56 years, the Ontario Food Terminal has been the landing point for almost all of the produce that feeds the city, a place where growers and food wholesalers interact. Tenancy ensures that some families hold 30 year leases, “renewable in perpetuity.” There are 550 stalls available for lease, and daily spots as well.

It’s a bright, crisp Tuesday morning, and the temperature hovers just above freezing. I’m being led around the terminal by General Manager I.B. Nicholas, or Bruce. A burly man in a leather jacket, Bruce has worked at the Terminal since 1975. He is the eyes and ears of the place-as we walk around the Buyer’s Court, an area comprised of three sides of a square building, with a courtyard in the middle where trucks can back up to the loading docks, he receives friendly greetings, jibes, and whispered asides from the buyers. These gentlemen run the gamut from a small Italian man standing guard by the Rabba Fine Foods trucks, with a wink and a grin, to the foreboding white-haired J.E. Russell, who towers above Bruce in his wholesale produce warehouse, tossing around bags of lettuce, chopped by jets of water. “You ever had a salad from Subway?” Bruce asks. “This is where the lettuce came from.”

As we make our way onto the Buyer’s Court, beside the open maws of the empty trucks yawning into the slushy parking lot, a box of California broccoli is crowned with crunchy white snow.

We continue through the warehouse. “I’m looking at Chile, Central America, Florida,” Bruce says, gesturing to stacks of produce as we walk. In the dry goods warehouse the air is spiced with the scent of walnuts from Tunisia, peanuts from India, pounds of coffee. We walk past stacks of tangerines in the Maroc unit. Bruce tells me they cut a deal with the crown princes’ of Morocco to be the exclusive distributor.

In the Tomato King produce warehouses, boxes of vegetables are stacked two men tall.  A dragon is drawn with Sharpie on a plywood podium stocked with clipboards. A pair of heavyset moustachioed buyers, twins, chuckle to eachother. “Have you seen that movie stoned?” One asks. “What do I look like, Jimi Hendrix?” his brother responds.

Behind the warehouses, in the shade of the concrete overpass, is the Farmer’s Market. even at the end of February, local produce is the rule here. 99% of the stock hails from within the province. In the summer, it is a bustling marketplace-today, only a few trucks dot the concrete space. Farmers like Rick Philipp come here three times a week. In the winter, he gets to sleep in-he’s not here until 4 am.

Another thing you can find all year round in the Farmer’s Market are flowers. Garrett Kralt brings spring bulbs, cut flowers, and potted lilies from Hamilton every day. This month, Kralt is offering shamrocks for St. Patricks Day. “We buy them off a guy-don’t worry! He’s an Canadian grower!” he chuckles. As we Leave Kralt’s truck and stroll past some pussywillows, Bruce gestures at the deserted, icy parking lot. “In the spring, this place is a sea of flowers.”

The sheer volume of produce at the Terminal begs an obvious question, and Bruce is quick to emphasize that OFT sets the standard for waste disposal for wholesale markets around the world. Turns out, OFT’s turnover is so great that only 1% of what comes into the market leaves it as waste. And for 25 years, that waste has been seperated. Organics go back to Ontario farmers as compost. Considering 1 million lbs of produce come through here every day, that’s a staggering achievement.

As we’re leaving the warehouse, a wizened grocer in a khaki jacket is s

moking defiantly. Everyone he passes is telling him to put out his cigarette-he’s looking at the floor, defiantly taking drags. Bruce shakes his head. “We have all types of people. We have ignorant, we have intelligent, we have everything in between.”

Watching the men-and they are, almost exclusively, all men-walking back and forth through the buyers court, wrapped in parkas and toques, I wander at what the scene must be like on a more inclement day. “How cold does it have to get for you to shut down?” I ask.

Bruce looks at me, incredulous. “We never shut down,” he says. “Do you stop eating?”