"She's a rich contradictory character that you rarely see. I love this film for this reason."
Film

The day before she received a call from director Joachim Trier (Thelma, Louder Than Bombs), Renate Reinsve had quit acting. But she quickly changed her mind after reading the script for The Worst Person In The World, which snagged two Oscar noms earlier this week. “I had a profound personal experience reading it,” she tells me over Zoom, from her messy hotel room in New York City. “I felt that she was so close to me…but it’s very universal. I knew it would move a lot of people. She’s a rich contradictory character that you rarely see. I love this film for this reason.” 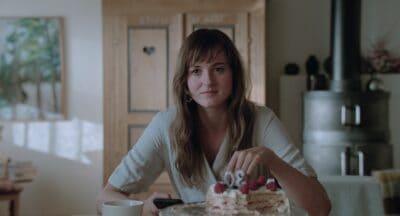 Rich parents and intelligence have provided Julie with many options. Her post-graduate studies begin in medicine, but when she decides she’s more interested in the mind, she jumps to psychotherapy. But then she realizes that she’s craving a more creative lifestyle, so she quits and becomes a photographer. In her jumps from this to that, Julie fucks men and has a good time. Eventually, she settles on the one man who says he can’t be with her.

In her constant quest to find more—more satisfaction, more thrill—she hurts people. Julie says awful things and makes bad choices, even if they are exciting ones. “I think she’s making choices from something external—something she thinks she should be, or comparing herself to other people. She’s on social media, like everyone, and trying to find an identity. She’s struggling to accept herself.”

Like so many of us, when life gets uncomfortable, or boring, Julie runs. “Every time she gets an upsetting emotion, she runs away from it and does something self-destructive. She needs to learn to be with her emotions and surrender to the chaos. She needs to find peace with herself,” says Renate. It’s a struggle all humans go through—learning to be still with ourselves is a lifelong exercise. For some it comes easier than others. But rarely do we see this internal struggle, and how it manifests in our actions, so accurately reflected on screen, especially in young women characters.

We can all recall moments in our life where we’ve said something awful, or acted in a way that was selfish and a little cruel. For Julie, these out-of-character actions are in response to a frustration that comes when we haven’t quite found our path, or know that we have talents that aren’t being channeled properly, and are instead building up inside like a giant twisted knot of rage and confusion. Like Julie says in the film “I feel like I’m playing a supportive role in my life.”

“This is a very privileged problem,” says Renate, referencing the book The Tyranny of Choice  by Renata Salecl. For Julie, the sense of overwhelm and confusion is not just about choosing a career path or romantic partner, but the abundance of choice that lies everywhere. “Having too many choices is actually making people unhappy. Like going on our phones! Dating apps. We can choose the kind of news we want, we can choose the angle. Just going to the grocery store, you have like 100 types of milk! We think we have freedom and luxury, by having a lot of choices, but it actually makes us quite unhappy.”

For Joachim, and the entire cast, film is an exploration of what it is like to love today, with all these choices. The film is also an exploration of time, and seeing how choices are lost when time passes. To capture this on screen, the team approached the exploration as more of a question. “Often a director will ask you to show us how you feel, to make it clear [for the audience]. But Joachim urged us to see where the scene took us. I think you actually get more nuanced scenes from that, because you can see the human beings behind the character. If you decide on things, you can sometimes see the strings… this was a new way of thinking and acting, and I will take that with me.” 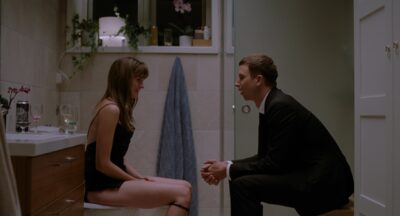 The Worst Person In The World stands out for its unique treatment of story, dazzling cinematic style, and knockout performances. As with so many unpredictable twists in life, what Renate assumed was the end of a career, was actually the beginning. The world is waiting to see what she does next.

"She's a rich contradictory character that you rarely see. I love this film for this reason."