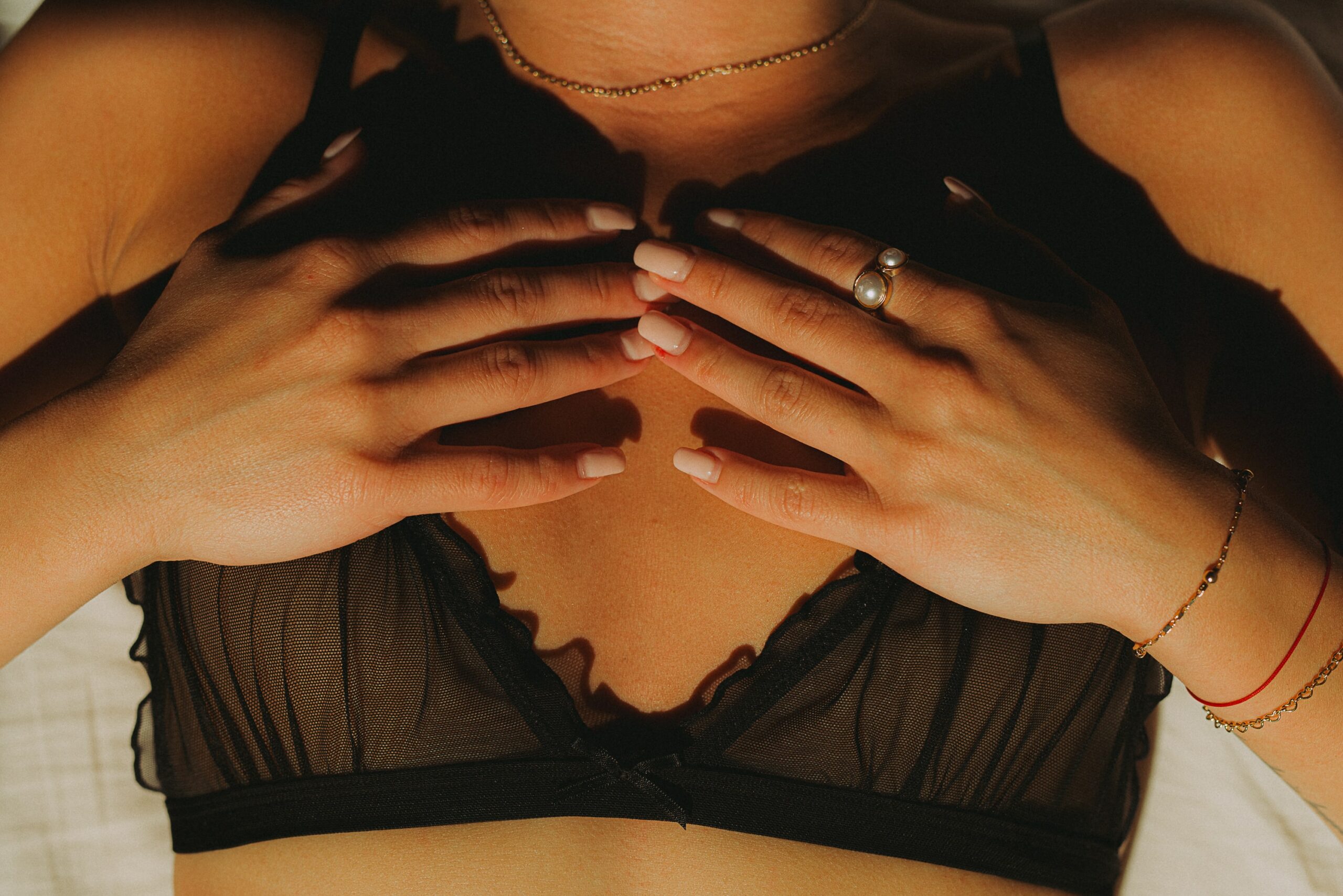 People love to make sweeping statements about entire generations (the millennial avocado toast thing has been ongoing since 2017). One of the more buzzier topics of discussion  is the sex lives of Gen Z. Specifically—are they having more sex or less sex?

Born into the digital era, older generations are obsessed with finding out how the internet, social media, or general screen time, has affected physical intimacy for young twenty-somethings. With many Gen Z’s coming of age during the pandemic, there’s also a genuine curiosity when it comes to understanding how COVID has influenced their sex life. Perhaps the hunger to find answers to these questions comes from the fact that parents, largely the Gen X generation, are concerned about their kids, who’ve reached adulthood at a very stressful and strange time (that doesn’t look at all like their youth in the 1990s). Or maybe people are nosy and just like talking about sex. Either way, we’ve done some digging into the data surrounding Gen Z and sex, and the answers—as always—are not straightforward. 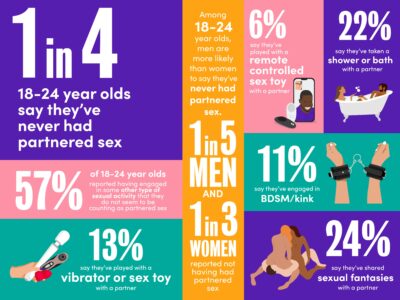 A nationally representative US survey of 2,000 adults conducted by the Kinsey Institute and Lovehoney reveals that 1 in 4 Gen Z adults say they have yet to have partnered sex, however the very definition of sex is changing.

“The definition of sex has always been and will always be evolving and highly personal. What counts as sex to one person may not even register as a desirable act for another, so it will always be subjective,” says Sexologist and Relationship Expert Jessica O’Reilly. “Heteronormative approaches have often defined sex as putting the penis in the vagina, but this narrow definition has the potential to cause harm.”

In the 1990s, people talked about sexual identity in binary terms—queer or straight. Thankfully, (most of) society has progressed to acknowledge that humans are not that easy to categorize; we don’t fit into two buckets. There are now over 100 sexual identities (and growing) to choose from. This major shift has encouraged young people to explore their gender and sexuality which ultimately leads to experimenting with different types of sex.“The options and support for a wide range of sexual behaviours and pursuits has widened, so folks may be more comfortable opting in and opting out…… So there are likely more Gen Zers opting into a wide range of sexual acts and more opting out; I’m hopeful this reflects more sexual agency and greater reflection on personal desires and boundaries as opposed to conforming to socially imposed norms.”

The statistics gathered by Prodege also suggest that young people are having less partnered sex because there hasn’t been the same kind of opportunity—COVID forced sex online. 46% of young adults say they have engaged in some type of virtual or online sexual activity. When it comes to in-person hookups, there’s more hesitancy than older generations.

“It makes sense that they’re feeling more cautious—they’ve spent around half of their adult lives living through a global pandemic (which isn’t over yet), so it follows that being mindful of safety is their norm,” O’Reilly says. “Thoughtfulness around safety precautions has been the norm — from masks and testing to socially distancing and vaccines and this has extended to dating and sex. I hope that the normalization of these conversations and considerations outlives the pandemic — not to encourage people to abstain, but to give them options to assess their own risk tolerance and take precautions that align with their own needs and values. If you don’t feel pressure to “lose your virginity”, perhaps you’ll have more time to reflect on and explore your own sexuality before doing so with a partner. With broader discussions about sexual options and sexual identities also comes greater awareness of asexuality.”

Since the overturning of Roe Vs Wade, the decline of partner sex in this generation has decreased even more. In Lovehoney’s post-Roe survey, they found that 40% of Gen Z adults say they are less likely to hook-up, 15% are less likely to engage in sexual intercourse, and 68% of women reported being worried that this will negatively affect their ability to have pleasurable sex. 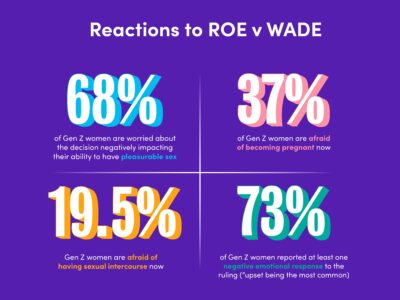 The numbers are no surprise to O’Reilly. “Reproductive justice goes hand in hand with liberation and pleasure. They’re inextricable. If you’re worried about getting pregnant, your sexual response may be stymied. It follows that the same would apply to reproductive rights like abortion.”

Instead of jumping to conclusions that generalize generations as having more or less sex, people need to consider the whole picture, including the multitude of external pressures that have an impact. As we continue to evolve, we need to broaden the definitions of what pleasure, intimacy and connection look like. “Sex is one route through which we can explore these experiences, but it’s not the only one and it’s not the end-all-be-all. We have an unfortunate tendency to generalize our own needs, desires and experiences to everyone else, so if we want more sex, we assume others want the same, which isn’t the case. Less sex isn’t universally good or bad. That’s up to each individual to determine, so I think older folks should just go ahead and focus on their own sex lives. The “kids” will be fine.”