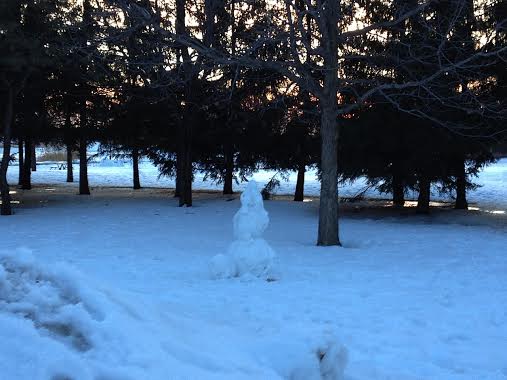 "I felt even more powerful when I looked down at my legs and realized I couldn't feel them."

It’s the time of year when I join the silent minority that really loves the snow and cold. This is surely due in part to the fact that I’ve never owned a car. Having therefore never had to worry about winter tires, bad drivers, or shoveling my car out post-storm while trying to avoid losing my white iPhone in the drifts makes the weather seem magical at times. (I also don’t have an iPhone. See that? Strategy.)

It’s also that time of year when I think a lot about our ability to go numb. I know that sounds dark but stick with me, comrades.

The first time I remember going numb I was teaching myself to be a tobogganing ninja. I was about 10 and attempting to conquer Montreal’s pride, Mount Royal. Figuring out how to dodge kids and trees convinced me I was invincible. I felt even more powerful when I looked down at my legs and realized I couldn’t feel them. “This means I can stay outside forever!” I told myself. I could do whatever I wanted; I couldn’t feel anything.

It didn’t take long before the threat of frostbite killed that dream, but still–for a little while on that hill, I was bulletproof.  Like a tiny Superman with a snowsuit and a runny nose. It was a weird kind of liberation.

Since that time, I’ve often reevaluated my thoughts on numbness, trying to make sure that parts of me don’t go numb with age–things like the heart and the mind, which I figure will outlast everything else. But I’m starting to think the me on Mount Royal might’ve been onto something. What if, over time, you DO let certain parts of yourself go numb, like the parts that serve no other purpose than to hold you back or weigh you down or fuck you over?

I nervously wrote a query letter last week, second-guessing every single word as though this was a necessary part of the process.  I opened up a window to let the air wake me up, and I thought back to the tobogganing-ninja-person-on-the-mountain who wasn’t going to let anything hold her back.

I breathed in the smell of the cold, sat back down, and peacefully finished off the letter, clicking “send” without any of the usual melodrama, replacing that now-numbed part with more productive thoughts, like whether nor I could rock a Superman cape.

My guess is yes.