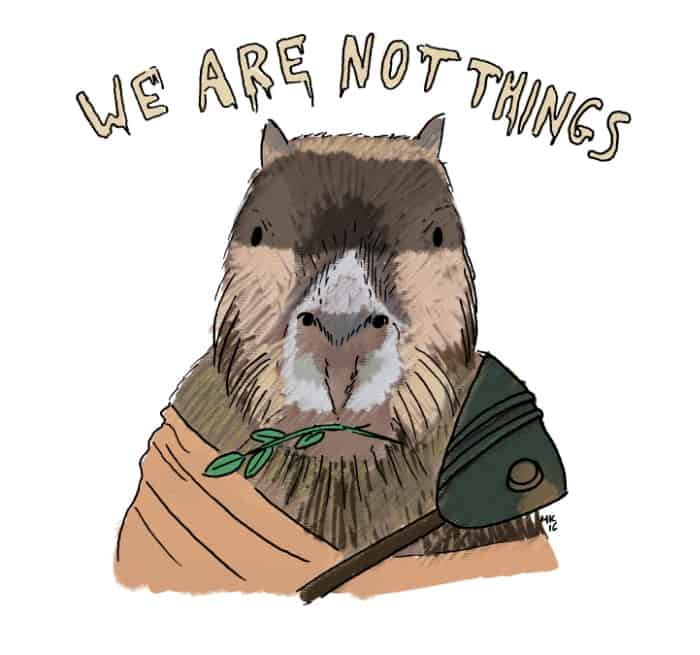 Capybara Turned City Mouse: A Letter From Our Furry Friend

Listen, let’s just get this out of the way right now. I am a capybara. Yes, I look like a big, soft rectangle. Yes, I have been mistaken for a living teddy bear. And yes, I can speak, read, and write. You see, I’m more than just a cute, cuddly creature. I’m a thinking, feeling rodent who deserves respect. Okay? Okay.

So, my partner and I escaped last week. Mainly we did it for a lark; we’d eaten some fermented plums that we found in our enclosure, and things got a little bit silly.

Since we’ve been out, I’ve seen my partner blossom. She’s such a city capybara now! She has a favourite hotdog stand, she loves Drake, and she has opinions on how to improve the transit situation. She’s been talking about digging out a burrow in Leslieville (because real estate in the west end is INSANE right now) and setting up a small business there.

We were chatting with this weasel who told us his cousin eats coffee beans and then—get this—shits them out and then sells the shit! Crazy right? Anyway, she’s thinking that the Tdot coffee market is ripe for some capybara shit coffee, and I can’t help but agree. I’m so proud of her newfound ambition, her bravery, and her independence. There’s just one thing standing between her and her dream life: me.

I hate being free. I want back into our old enclosure! Knowing that there are twenty-five must-try roti places in this city stresses me the fuck out! Just toss some melon chunks in front of me and I’m a happy capy. And then there’s the congestion, car alarms, construction. It’s too much for a traditionalist mega-rodent like me to bear! I haven’t had the heart to talk to her about it because it seems like there’s no option where we’re both together and happy at the same time. Could this really be the end of the sweetest love two young capybaras ever knew?

Thanks for your time,
Capybara

Firstly, you are the cutest little tiny capybara I’ve ever heard of! Oh my god! I’m going to try to answer your question, but it’s going to be hard for me because now I need to Google pictures of capybaras and squeal for a long time.

Secondly: I believe there are creatures who are suited to high-stimulus environments, and those who are at their best when they feel peaceful and safe, and that it’s nearly impossible to change the sort of creature you are, deep down inside. That said, even more than that, I believe in the power of love, and that adorable animals should be able to snuggle each other, because that increases your collective adorableness tenfold.

The first thing you have to do is talk to your partner, since apparently you can talk. There’s no use pretending you’re content; she’s probably noticed your little furrowed capybara brow already. (Adorable!) Once it’s all out in the open, the two of you can work together to find a compromise. To paraphrase Sherlock Holmes (now I’m imagining you reading Sherlock Holmes, eeee, so cute!), you must eliminate all impossible options. Once you’ve done that, you can choose from among the remaining improbable options. For instance, many find Scarborough to be improbable, but a burrow on the bucolic Bluffs wouldn’t be that bad a commute to Leslieville. Then you get your peace and quiet, and your partner still has a chance to lean in and be the strong, confident female capybara you fell in love with.

P.S. What is her favourite hotdog stand? Just curious! I’d love to get some street meat together and give you guys some pets and kisses, eee!

This just in! STDC’s illustrator Mariel Kelly has released a line of capybara-inspired clothing. Join Team Capybara now. Use this link to get free shipping on Society 6.

For The Kids: A Holiday Fun Filled Afternoon at High Park Zoo