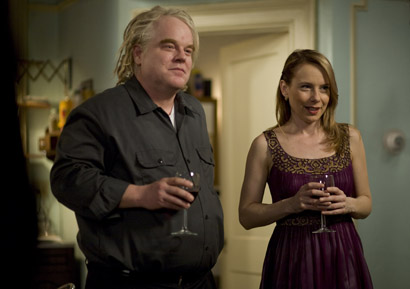 This is a film for those who deeply admire Philip Seymour Hoffman and have an appreciation for the craft and talent of method acting. It’s slow moving but the characters, in Hoffman’s directorial debut, are rich, complicated and completely endearing. Hoffman plays Jack, a limo driver in New York City, who leads a simple life where everyday pursuits are incredibly daunting. Introduced to Connie (Amy Ryan) by friends Clyde (John Ortiz) and Lucy (Daphne Rubin-Vega), this film examines their tender budding relationship and the dynamic between couples – both theirs and the fiery and unstable Clyde and Lucy. Connie dreams of one day rowing in a boat with Jack and relays to him that she’s never had anyone cook her dinner, so with the help of Clyde, Jack diligently spends days in a Harlem pool trying to master the front crawl, and nights getting tutored by an unlawful chef who goes by the nickname Cannoli. After, what seems like months, Jack hones his skills and anxiously prepares a dinner for the foursome. The night erupts into an intense door-slamming drama, and the strength of the fragile characters is pushed to the limit. From his stringy tattered dreads to his awkwardness in the bedroom – we are once again seeing Hoffman reinvented into a character who is fascinating to watch.