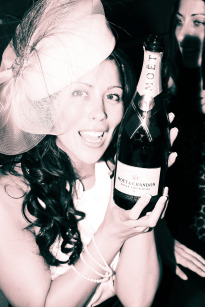 “One year at TIFF, I had a bourbon encounter with Chris Noth. Doing shots in the Drake Lounge with Mr. Big was the most worthwhile hangover to date!
How do you prepare for TIFF? I am going canoeing in Algonquin with my best friends to get grounded, then I am going to Body Blitz for the “works”, to get refreshed, 10spot for a facial, manicure, pedicure, then to Bob & Paige for a cut, color & blow-dry to get beautiful (I’ll be stopping by Ritual’s blow & go bar for interim blow-drys). Incidentally, I also do a version of this post TIFF to recover.
Where would we most likely find you during TIFF at 2AM? Working the black carpet (we always do things a little differently at Drake) in my finest Femme Fatale ensemble
What has been your most memorable TIFF party? Drake’s very first Film Fest Gala where Atom Egoyan, Don McKellar, Gill Bellows, Heather Graham, John Sales, Kevin Bacon, Jason Lewis, Maria Bello, Michelle Trachtenberg, Mike Myers, Mathew Perry, Neve Campbell & Nick Nolte attended. We ended the night with our former governor general, Adrienne Clarkson walking out the front door of the Drake only to catch an impromptu striptease done on top of a taxi, right in front of her limo, to which to exclaimed “this place is incredible!”
What are the three things you need during TIFF to survive? Vitamin Water, Alexander McQueen Shoes & one of Drake’s stiff martinis at 2am nightly.
If you are looking for a moment of peace and quiet within the ten days–where do you find it? Home. Our little house in the east end, where my wonderful husband awaits, is the most relaxing, rejuvenating place in the world! Just a few hours there each day & I’m ready to conquer another red carpet!
Which celebrity run-in has been your favourite? Or had you the most awestruck? I’d have to say my bourbon encounter with Chris Noth. Doing shots in the Drake Lounge with Mr. Big was the most worthwhile hangover to date!
What has been the strangest interaction you’ve had during TIFF? Nick Nolte insisting on mixing his own drinks. “Triple vodka in one glass, Sprite, no glass, in another. Then, a clear empty glass,” into which he measured the combinations of his drink with the exactness of a mad scientist.
Which film are you most looking forward to this year? Werner Herzog’s The Bad Lieutenant
What’s your best advice for someone who’s never attended TIFF before? See as many films as possible & remember the film festival is for everyone. There are plenty of 5 star events to indulge in without the need for a 5 star budget! Dress up, Dress up, Dress up! There aren’t enough reasons to get dressed up these days and in September you have 10!
Best SWAG ever? The make your own T-shirts at the Holts party last year were so much fun! (This year, the Drake General Store will give Yorkville boutiques a run for their money with TIFF-inspired merch like the Alfred Hitchcock ‘Birds’ Barbie.)
You have a huge smile on your face at TIFF – what just happened? I have just succeeded in pulling off one of those ‘talked about for years to come’ nights when the whole building is at full tilt while amazing bands, DJ’s, performance art, food & delicious drinks are being enjoyed everywhere, I’m sneaking celebs in & out the back door, so they too can enjoy the Drake alongside our neighbourhood guests & my mentor Barbara Hershenhorn has just popped in to share an icy cold vodka martini with me.
If you could pick the brain of one filmmaker – who would it be? Alive or Dead? Alive – Tim Burton, Passed – Howard Hughes
If you could grab a drink with one celeb – who would you choose? Alive or Dead? Alive – Johnny Depp, Passed – Katharine Hepburn
What’s the first thing you’ll want to do once the insanity is over? Climb into bed with my hubby, a box of babycake cupcakes & a bottle of Moet Rose! I’ll also repeat part of the prep process with Body Blitz, 10spot & ritual in preparation for the Polaris Music Prize Gala. The fun never stops!