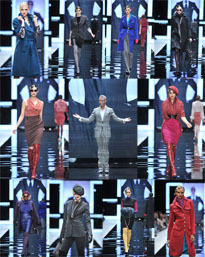 Jay Manuel Reveals his Attitude Collection from Sears and This Time We Get to Play Judge!

Attitude from Sears, what does that mean? SNAP. Get your shit together woman, it’s about your strut, your no bull approach to bold colours, and sticking your hands into mega muffs. It’s CNTM host Jay Manuel with his perma-tan and white hair rocking it on the mother effing #LGFW runway. A-T-T-I-T-U-D-E. Spell it, learn it, wear it, own it, ’cause it’s only at Sears.

Fashionistas-lashionistas and frugalistas got themselves into a massive tizzy last night when Twitter rumours started buzzing from here to Brampton about special VIP guests at the Sears show. We heard it from @HawleyDunbar first and didn’t hesitate to keep the rumour abuzz: “Just caught wind of a juicy rumour that Tyra Banks and or Gwen Stefani will be in attendance at Jay Manuel Attitude show tonight at #LGFW” she tweeted. And the crowds went wild. Between washing back Special K bars with Peroni and side straddling real life Ken mannequins, we couldn’t stop thinking about OMG Tyra and Gwen!

Okay, so Tyra didn’t show up to tell us how to be FIERCE and Gwen didn’t hollaback from Heritage Court but it was still fun to see bright eyed Jay show off his inaugural collection. Avid fans of both CNTM and ANTM, Jay has taught us a lot about judging, and since he never holds back, neither will we.

The show began softly with Billie Holiday’s sultry I’ll be seeing you played while a tender video montage showed close-up shots of Manuel detailing his collection. Awwww. We began to think of him like we do the girls when they first step into the judging panel. Jay-Jay, you make our heart go flutter.

But then things revved up seventeen notches when out blared a remix of HEY BIG SPENDER. Cha-cha-cha-cha-cha….the minute he walked through the door…BA-da-bump…..WOOOOOOO! Oh sista, this is the Jay we know.

For the first half of the show the clothes were in a muted palate of black, white and grey but suddenly it was like The Wizard of Oz when Dorothy greets the munchkins. And we’re not talking just a few accent colours. Jay Manuel showcased colour blocking in a truly fearless fashion. One outfit consisted of a red trenchcoat, orange tights, a green skirt and a purple top! SKITTLES!

We love the tailored bright coats with long silhouettes, playful rainbow stockings and striped frenchy tops but we aren’t totally sold on the blazers and belted sweaters. What we were down with was the Sears afterparty. Whaaat? You heard us! Anita Clarke from  IwantIgot summed it up best in a tweet: “OMG they are playing @AZARIANDIII with @fritzhelder and cedric at the Sears party. I want to dance on the tables now” Well, who ever would have thought?