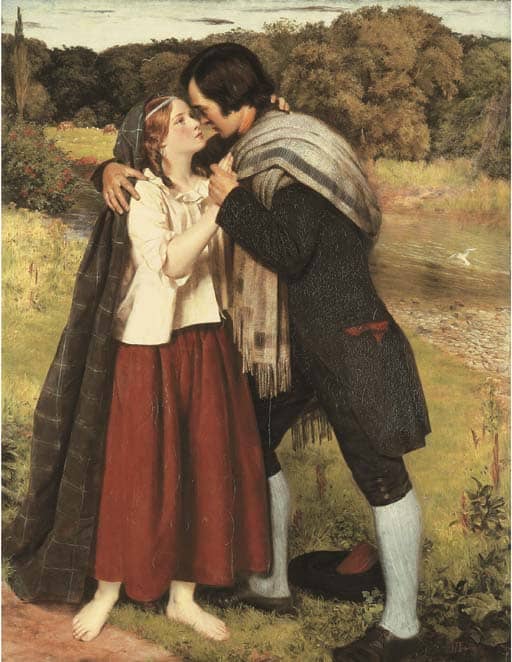 Much has been written about Robert Burns, the celebrated Scottish poet whose legacy has inspired haggis and whiskey-fuelled celebrations across the world. But what about the main influence in his life – his wife, Jean Armour?

This woman has been largely relegated to the dregs of history, no more than a footnote. Until now.

Author Melanie Murray has written a fascinating novel that pierces the stereotype of Armour as the dull, long-suffering wife. Should Auld Acquaintance: Discovering The Woman Behind Robert Burns follows the story of Armour through her romance with Burns, as well as her struggles with being cast out of her family (for getting pregnant out of wedlock), losing several children, infidelity and financial ruin. What emerges is a powerful portrait of a strong, gifted woman who survived and thrived, despite dire circumstances.

We spoke with Murray this week.

SDTC: What did you uncover about Jean Armour that surprised you?

MM: I was just amazed at the life this woman lived. The old adage that real life is more improbable than fiction – that’s really the way I felt. What she had to go through – how her life got turned upside down after she met this charismatic poet – her father’s vehement opposition, the clandestine affair, the pregnancy, being sent out of her home, denounced as a fornicator in the church, then giving birth to twins out of wedlock, the deaths of her children. Having to give her little boy away, being pregnant for the second time out of wedlock, another set of twins and their deaths, getting kicked out of her home, giving birth alone – this is before she married the man! She would have to be a really strong woman to have endured this.

There’s this stereotype of ‘Bonnie Jean’ – this eternally forebearing, selfless, utterly devoted wife that just adored him and put up with him and all of his philandering. I really wanted to get below that slack portrait and give her some complexity, give a sense of what she really did go through. What would it be like to be married to this poet who is writing poems about other women? Imagine that. How did she live with that? How did she reconcile that? Divorce was not an option, really. You had no rights over your own children at that time. They were pretty much in it for life. I do think he really loved her, and she him as well. There was a lot more going on.

I found it fascinating how you paralleled your own love story with hers. Did you plan that from the beginning?

It just kind of evolved. When I started reading about the circumstances of how they met, it reminded me of this love affair I had with another poet. Jean and I had similar experiences of falling in love with poets and our lives being turned upside down. Jean’s course went in a very different way than mine because of birth control, essentially. We had predictable courses plotted out for us, and this relationship turned all of that upside down and made us see a lot of things in a different way. That experience changed my life. I left the marriage I was in not for this man but because of him, and I’m grateful for that. I don’t know how different my life would have been, but it seemed to be the thing I needed to open my eyes and broaden my thinking and allow me to see that there were more options.

I really liked that feeling of us being old acquaintances as it were, of really connecting across time. We are women, and we have similar experiences no matter when or where. Making that link allowed me to get inside and understand her and portray her as someone of flesh and blood.

Was writing this book a feminist act?

I think it was. As I started doing the research and I found that this was a woman who, like so many wives of famous men, had never been acknowledged for her essential role in the great poet’s achievement. In Scotland, people would always assume I was there doing research about Robert Burns.

It’s important to give people a sense of what she went through, and how important she was to the central work in his life. He couldn’t sing, for one thing. She had a beautiful mezzo soprano and could sing the old Scotch tunes he wanted to set verses to. And providing him with a stable home in which to write (he was such a mercurial man), I think she really stabilized him.

The book also offers a glimpse into Scottish daily life in the 1700s. Was it a fun exercise to flesh out that world?

It was. I had to do a lot of research about the social history during that period in Scotland. Trying to get those kinds of things right – religious aspect – that Calvinistic thinking -was really important to me. Her father ruled with an iron fist with that kind of doctrine guiding him; the whole focus on sin, stalking sinners and hauling them up in front, the humiliation that people had to suffer, the stool of shame – that’s real. You can only imagine as a woman what that would be like.

What can we take away from her life?

Her experience of motherhood is one thing that is still very relevant today. We certainly have birth control, which they didn’t have, and that made a huge difference in her life, with the pregnancies and whatnot. She had to give up one of her babies. So many women in her era had to do that. Women today still have to do this. It’s a very painful dilemma that women face. And she suffered the anguish of burying six of her nine children – that maternal grief.

One of the reasons I was in Scotland the first time was because I was writing a book about my nephew who had been killed in Afghanistan. My sister was just crushed about her son. And going to the graveyard where four of her daughters were buried, trying to imagine how that would be…the infant mortality was higher then, but the anguish was no different. How did she cope with that, go on, and live with her losses?

She was only married to Robert for years, and he died. She was thirty-one, she had six young children to raise on her own. He died in poverty, and she did not marry again (by choice). She had this incredible strength, endurance and resilience. I find that very inspiring about her – that spirit she had to just survive and thrive.

What has been the most rewarding aspect of writing this?

I think just seeing her come alive. Seeing her story fleshed out and really creating a sense of discovery – discovering the woman behind Robert Burns. She was very much behind him in the shadows, but she was also behind him in the sense of holding him up. She was responsible in a lot of ways for making him the great poet we honour today. By giving Jean her due, I feel like I know her. I am taking the facts and interpreting them, doing some imaginative fleshing out. I still feel I’ve captured a real essence of who she was and what her experiences might be. It’s very satisfying to think she now has a story.

January 25th is annual Robert Burns Day. Find out where to celebrate in Toronto.