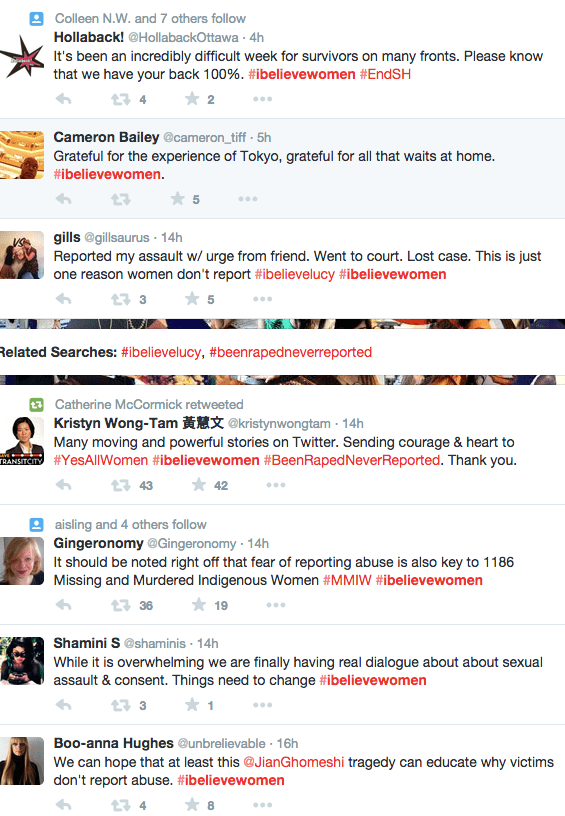 A tarnished icon & the mobilization of a united front

Last Saturday, Jian Ghomeshi was known to most Canadians as a beloved radio host, an intelligent voice, and a respected leader in Canadian broadcasting. Just 5 days later, he is viewed as a predator, a misogynist, a sociopath, and a violent monster.

The free-fall of Ghomeshi’s once-spotless reputation has been remarkable. But as the ex-CBC host’s popularity continues to plummet, a nation of voices rise up.

Sunday
Jian’s plea to his fans on Facebook left us shocked, confused, irritated, and totally intrigued. We had a sense it was just the beginning.
Monday

The Toronto Star shared the stories of three women allegedly assaulted by Ghomeshi. Shock and curiosity turned to anger. Suddenly, this wasn’t about some harmless kinks, it was about real violence.

Listening to the fourth anonymous victim  come forward on As It Happens, we became  disturbed – and now incredibly outraged. The woman’s account finally gave a voice to the other side.

Late on Wednesday night, the horrifying details included in the Toronto Star piece revealed a disgusting pattern. We weren’t just angry anymore, we were nauseous.

#IbelieveLucy #Ibelievewomen and #BeenRapedNeverReported began to take over our Twitter feed. We were no longer just passive readers – we leaped into action. By the end of the day, Reva Seth became the 9th victim to come forward with yet another fearless and extremely incriminating account. Ghomeshi was dropped by his crisis management team, Navigator and his own PR company. Ghomeshi posts on his Facebook page: “I want to thank you for your support and assure you that I intend to meet these allegations directly. I don’t intend to discuss this matter any further with the media.”

Strong, unified, empowered. At the time of writing,  9 victims have come forward. But thousands of us stand behind them.

Every tweet, comment and Facebook update supporting the women who’ve come forward is a link in the chain; a chain of support that stretches from coast to coast. The movement has grown much bigger than the Ghomeshi story.