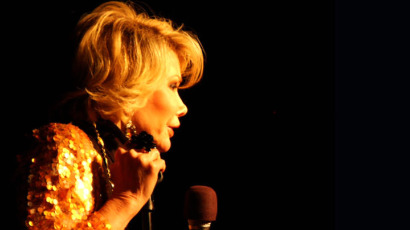 Joan Rivers: A Piece Of Work In Theatres Now

“When I first showed Joan the final cut, it was just the two of us in her apartment with American grilled cheeses set before us.”

One of the most hilarious, lasting, and least understood figures in pop culture, Joan Rivers’ media persona is so expertly crafted that few have thought to delve below the surface. But when you do-wow. Filmmakers Ricki Stern and Anne Sundberg spent a year examining this fascinating, funny, and formidable comedienne, getting the story behind a true showbiz legend. The doc, Joan Rivers: A Piece of Work, is in theatres now.

Why do you think Joan has been such a lasting figure in popular culture?
Joan reinvents herself. She’s self-aware but not self-reverential and I believe people like that about her.

What surprised you most about Joan?
She is genuinely funny – in a very spontaneous unrehearsed way. Her humor is quick, smart and contemporary. Also she is an extremely sensitive and caring person who cares deeply for the people around her.

What was the craziest filming experience you had working on the project?
The craziest part of filming Joan was keeping up with her schedule. Joan’s sheer workload was a additional challenge. Here’s a glimpse: The following is a typical two-day shoot with Joan: Fly at night with Joan to Palm Beach, meet her the next morning in her hotel room at 6:00AM for hair/ make up, followed by 7:00AM local interviews and then a breakfast lecture and book signing. Next, pile into an SUV with Joan and her assistant Jocelyn and drive 4 hours to Key West for another 2-hour book signing. With 15 minutes to spare, drive past Hemingway’s house, spend some time looking for the best gay scene in town and then land at a theater where Joan warms up the band, changes clothing and does an hour stand up set. Then, drive to Miami and arrive at an airport hotel at 2 AM. Four hours later, fly off to LA where Joan is booked at 1:00pm on a talk show. After the show, take the red eye with Joan back to NYC, landing Sunday morning where she drives to her country home to entertain friends for the night.

She seems so quick-does Joan Rivers ever turn off?
You see her in meetings in the film and in the car – those are her more down times. But yes, she does turn off a little but for the most part she is just funny without having to be on.

Do you think Joan Rivers is a feminist icon?
Yes of course, she broke boundaries as a female comedian, paving the way for women in a male dominated profession.

Has Joan seen the film? If so-what did she think?
When I first showed Joan the final cut, just the two of us in her apartment with grilled American cheeses set before us- she was fairly quiet throughout the viewing. She’d occasionally jot down a note and chuckle at an old joke but her feedback was very minimal. Of course the scenes we worried about the most – when Joan was the most vulnerable and bare – were not a concern for her. All her comments were directed at how other people might feel – she didn’t want to hurt anyone’s feelings. The worst part for me was when the DVD kept skipping and going back to the head of the film which opens with extreme close ups of her face – she merely comforted herself under her breath saying “it’s a documentary; it has to look like that.” But after a week of calm, Joan’s worry resurfaced and she sent long, general notes and short terse requests. She wrote everything from “it’s wonderful” to “it’s so negative.” This is the perfectionist side of Joan; the side that keeps her up all night preparing and rehearsing, writing and rewriting; the side we strove to illustrate in the film and the side that occasionally drove us crazy.

Did you ever cross Joan and get to see her bad side?
No – very rarely, she might get tired or stressed and we would see a fleeting moment of frustration. Because she’s usually being pulled in so many directions, I think she gets personal satisfaction remaining professional and not letting herself get frazzled.

What do you hope audiences will take away from your film?
Joan Rivers is funny, edgy and relevant. She’s a captivating and bold female performer, writer, icon, and businesswoman. She has the bravery to tackle issues in her comedy that has left her excluded from the boys’ clubs and removed from lists of more “appropriate” lady comediennes. Her comedy dissects the truth, and she embraces humor to ease the pain of tragedy. She has personally confronted suicide, business failure and biting criticism, and in the face of it all she perseveres.

Ultimately Joan engenders strong feelings in people. They love her, they hate her. And because many people have some prior exposure to Joan, the film works to strip away those surface associations to reveal a private and surprising portrait of this very public persona.

While the film pays tribute to the reigning queen of comedy – who broke boundaries and paved way for other female comedians from Kathy Griffin to Sarah Silverman – Joan’s story is universal as it speaks to aging in a culture obsessed with youth, and exposes the fleeting nature of fame by looking closely and unforgettably at the exception to the rule.