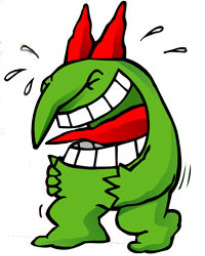 Shows You Don’t Want To Miss
by Heather Christie

Show me someone who doesn’t get a delicious, warm feeling when watching comedy, and I’ll show you a poor SOB who hasn’t peed their pants laughing. (Sad face for them!) Seriously folks, cheesy laughtracks aside, engaging in a few good knee-slappin’, belly grabbin’ chuckles not only feels pretty damn good, but it’s good for you. Laugh more = live longer, it’s the easiest math you’ll ever do! And how convenient! Just for Laughs Toronto is going on this week, so you’ve got ample opportunity to lengthen your lifespan at a tonne of venues all week long! Here are some of your best bets:

July 17 at Massey Hall— Sarah Silverman and Friends
So what’s the big deal with Sarah Silverman? Oh, I dunno, she’s only the goddess of comedy, the quote-unquote “funniest woman alive”. Ok, fine. Who are her stupid friends? Ummm…David Cross? Of Arrested Development fame?!?! And Louis CK?! Who I saw in December and he blew my face off. I don’t know Sarah’s other friends, but I’m sure they’re pretty tight too.

This 18 year old began burning up the YouTube-sphere when he was a mere lad of 16 with his off-colour tunes—one was about why Helen Keller is the perfect woman—and now continues, named recently by Entertainment Weekly as one of the 12 rising stars of comedy. Besides, he’s a cutie too—we can say that now that he’s no longer a minor.

For those of us who love dirty humour for which our grandmas would undoubtedly wash our mouths out with Irish Spring, this is the place to be! A perennial favourite at the original Just for Laughs in M-T-L, the show has finally made its way west. Not for the easily offended.