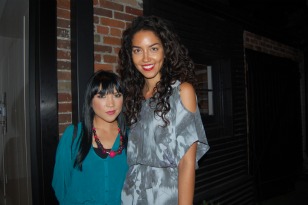 There are two ways of tackling TIFF: films and parties. I generally fall into the first category because, let’s be honest, I’m not really on the guest lists. But then I also prefer seeing movies when I’m not hung over, hunched in the back row like a sullen gremlin and smelling like brewery. So, when the invite arrived from boutique PR agency, NKPR, for the annual TIFF Cocktail Countdown it seemed perfect: A. I had an invite. B. Press screenings didn’t start until 10:00am the next day.

Held at the lavish Forest Hill home of NKPR founder Natasha Koifman (Toronto’s answer to Samantha Jones) the party felt like a marathon runner before race day: drinks were being nursed and there was more lounging pool side than dancing. But as Koifman noted, that’s the point: a relaxed atmosphere before the heavy duty drinking begins. What I assume to be the usual suspects were there (from Strombo to Sarah Taylor ) and the casual chat ranged from TIFF picks, to importing handbags to someone claiming they saw a lot of themselves in Larry David. Sure.

Winding down early guests snacked on cupcakes and candy (a NKPR staple I’m told) while Toronto Life’s Kevin Naulls and I lamented the fact that no one had jumped in the pool. But, to paraphrase Ice Cube, TIFF ain’t a track meet, it’s a marathon. Pace yourself.