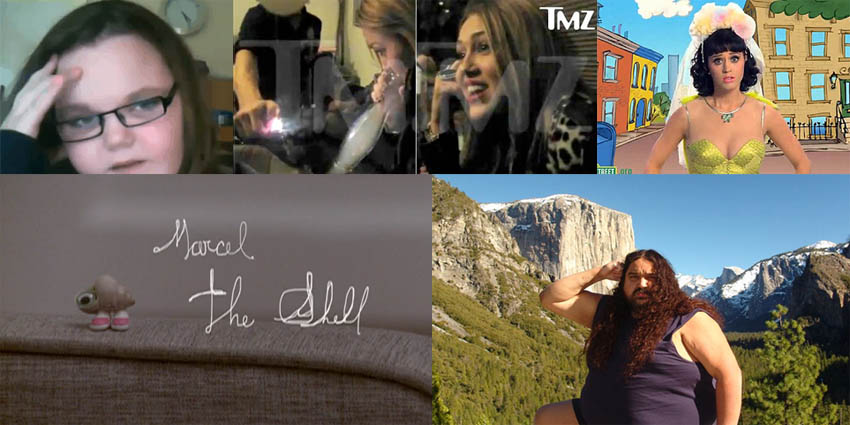 Ladies and Gentlemen, Your Attention Please: Pull out the Easy Chair and Pour a Hot Toddy, it's The Top 21 Viral Videos of 2010

Viral Videos as defined by urbandictionary.com are “online videos which gain mass popularity through Internet Sharing, such as entertainment websites, e-mail messages or suggesting a friend watch it.” I like to think of them as the new note-passing. Like what we used to do in elementary school, except the high-tech, adult version, sometimes even the not safe for work kind (NSFW). The new ‘news’ and hot gossip. Or, sometimes referred to as ‘What you really do at work’.

Here are the winners:

1. Mariah Carey not on her A game – or B, or C, or D – as she accepts the award for Breakthrough Actress in the movie Precious at the Palm Springs International Film Festival. Kinda sloppy and very slow moving. Not the most outrageous scandal by any means, but still entertaining.

2. Double Rainbow guy Paul “Hungry Bear” Vasquez steals our hearts – and our weed stash with his joyous reaction to seeing a double rainbow in Yosemite National Park. Apparently he was sober during the double rainbow sighting, however he admits there may be other videos on Youtube where he is, in fact, on drugs. PS- the ABC news people can be such squares sometimes…

3. Marcel the Shell with Shoes On had us at “My name is Marcel”. This little guy is so friggin cute he hardly has to do anything – just his very existence will bring a smile to your face. I like his lentil-hat.

4. Epic Meal Time shows us how to eat the most meat possible in one dish in their “TurBaconEpic Thanksgiving”. This went viral around American Thanksgiving time, getting around 400 000 hits in only a few days! Epic!

5. World, meet Antoine Dodson. His hilarious personality came out effortlessly during a news cast in Alabama after a man tried to break into his family’s house and sexually assault Antoine’s sister Kelly. Sexual assault is not funny. “Run and tell that” is.

6. Dan Savage and husband Terry start the “It Gets Better” project with a personal recount of their own upbringings and the homophobia they faced as youngsters, as a reaction to several tragic suicides of gay or questioning children. Dan is the best. I wish I could meet him every Sunday for brunch to talk dick, but I guess I’ll just have to settle for Savage Love in the back of Now Magazine every week.

7. Greyson Chance, an 11-year old boy covers Lady Gaga’s Paparazzi. This clip led little Greyson all the way to an easy chair facing Ellen on The Ellen DeGeneres Show, where Lady Gaga called from “in bed with her mom” to thank him for covering her song! Watching the video feels like going through puberty all over again.

8. Fresh off the presses – Miley Cyrus and friends film each other smoking from a bong on her 18th birthday. But seriously, salvia?!? Yeah right…I don’t buy it.

9. Girl goes crazy with her cam’s special effects – it’s exactly what it sounds like. Only weirder. And funnier. Sure did get a lot of LOL’s out of us, especially after a long hard day at work. Kick back and get ready to be silly. Personally, I think she really gets into her groove at 1:00 and the beginning is just a warm-up.

10. Double Dream Hands reminds us what choreography is like at it’s best. This video is great partly due to the teaching styles of professional dance instructor John Jacobson, and partly it’s just some gosh darned Napoleon Dynamite jazz-hands kitsch.

11. The quintessential childhood freakout video we can’t help but hate to love. We so feel for this girl yet can’t stop watching due to our own enjoyment. We’ve all been there – my song was from The Little Mermaid when Ariel’s at the bottom of the cave. I would record myself on my answering machine and never f***ing got it right.

12. Angelina of Jersey Shore makes an attempt at ‘rapping’ on her first single “I’m hot”. This “song” is destined for greatness, I’m sure. For some reason I have the urge to put quotes on every word in this section, because everything that she does lacks such legitimacy.

13. Jimmy McMillan’s “The Rent is Too Damn High” speech at the New York Governor’s Debate was passionate and great. Someone with nicknames like The Black Hulk Hogan, Papa Smurf and Rambo should be pretty funny though. He’s a hero for the everyman.

14. A dog dancing the merengue spun her way into our hearts. The very talented Carrie and owner Jose Fuentes give us a great show all the way from Chile. Entertainment fit for the whole family! No bongs or cursing here…

15. The Vagina Song – William Belli’s interpretation of Bruno Mars’ instant hit Billionaire. William wants to be a lady there, so freaking bad. Amazing production value and hilarious yet touching lyrics. If I could easily take off my vag and give it to you William, I would. Anything for someone who rhymes ‘stupid’ with ‘foopah’.

16. Lobster T – Claws Up (What What) OK, so this has yet to go viral (323 views isn’t much of a virus) but I think it’s hilarious and am hoping to start the trend. Gotta spread the Prince Edward Island steez across this great country.

17. Rob Ford in action The infamous “Fat Fuck” video, which ends with a member of Ford’s team saying “Rob, forget it” only the way a mother would say it to a child. Hello world, meet our new Mayor. Sigh.

18. Speaking of the world getting a (misconstrued) taste of Toronto via Youtube, this G20 Riot Cop Lap Dance is pretty classic. I mean, now that people aren’t being beaten randomly on the street by police anymore, it’s a lot easier to laugh about.

19. This one really has the essence of a great viral video – it’s a cat riding a turtle Just some good old fashioned innocent animal fun. Cutetastic and with rockin’ musical accompaniment. I can only imagine what the owners of these two pets are like, given what looks like their collection of stacked cardboard inside more cardboard, mustard yellow shag rug and well…a pet tortoise.

21. Some over-enthusiastic dude gave up his dreams of being a rock star and now plays at the wrong gig on the regular. And I think this may even be at church. Gotta love the zoom-in at 1:30 to really showcase his excellent moves. How fun would doing karaoke with this guy be? The epicness would be intense.

-by Becca Lemire and with contributions from Monica Heisey, Zoe Shapiro, Jen McNeely and Caitlin Agnew