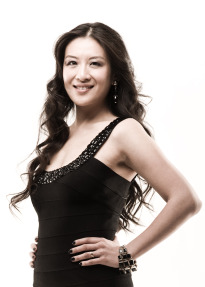 “One year, Jeff Goldblum fondled my finger tips because he liked my nail polish and said “this is a naughty plum.” It’s like he thought he could unlock the secret to my panties through my finger tips.”
How do you prepare for TIFF? I’m trying to work out a lot, but it’s hard because it’s summer, and I’m trying to eat better. I’m on Vodka detox but it makes me sad so I can’t wait for TIFF. I’m also doing research on the films and trying to see movies when I can.
Where would we most likely find you during TIFF at 2PM? 2AM?
2PM – I’m shooting links for etalk somewhere around the city.
2AM – Probably at the Hyatt rooftop. If not, I’m attached to the mini bar inside my hotel.
What has been your most memorable TIFF party? The street party the night of the Brad and Angelina riot. I was partying in the etalk Lounge at the Hazelton and the party spilled out onto the street. When Brangelina arrived – people started running. It was crazy.
What are the three things you need during TIFF to survive? 1) A bag that is cute but is big enough to tuck my flip flops in 2) My blackberry 3) A wing girl
If you are looking for a moment of peace and quiet within the ten days – where do you go or what do you do? Try to catch up on sleep – but it’s rare that I sleep during TIFF. I’ll catch 15 minutes where I can.
Which celebrity run-in has been your favourite? Or had you the most awestruck? I was really excited to be in an elevator with Emma Thompson once, but to be honest, I’m always awestruck around Brangelina. They are not ordinary – they have the power. There is light coming out of their ass. Also, one year Jennifer Lopez came into the etalk Lounge and started posing for a magazine. It was the best thing ever to watch Jennifer Lopez pose.
What has been the strangest interaction you’ve had during TIFF? Two films – Precious and Jason Reitman’s Up In The Air. Go Canada.
What’s your best advice for someone who’s never attended TIFF before? Don’t embarrass yourself.
Best SWAG ever? I don’t really take the SWAG. And when I do take it I give it away on Laineygossip. I keep the lame stuff…like books.
You have a huge smile on your face at TIFF – what just happened? I have a long list. There are a million things…Ewan McGregor invited me onto his motorcycle.
If you could pick the brain of one filmmaker – who would it be? Christopher Nolan because he is so brilliant and weird. I think that he is so creative in an offbeat sort of way.
If you could grab a drink with one celeb – who would you choose? Just one? Jessica Simpson, because I want to help her. I want to be her friend. She needs friends. I could do lots of things for her.
What’s the first thing you’ll want to do once the insanity is over? Get a foot massage.