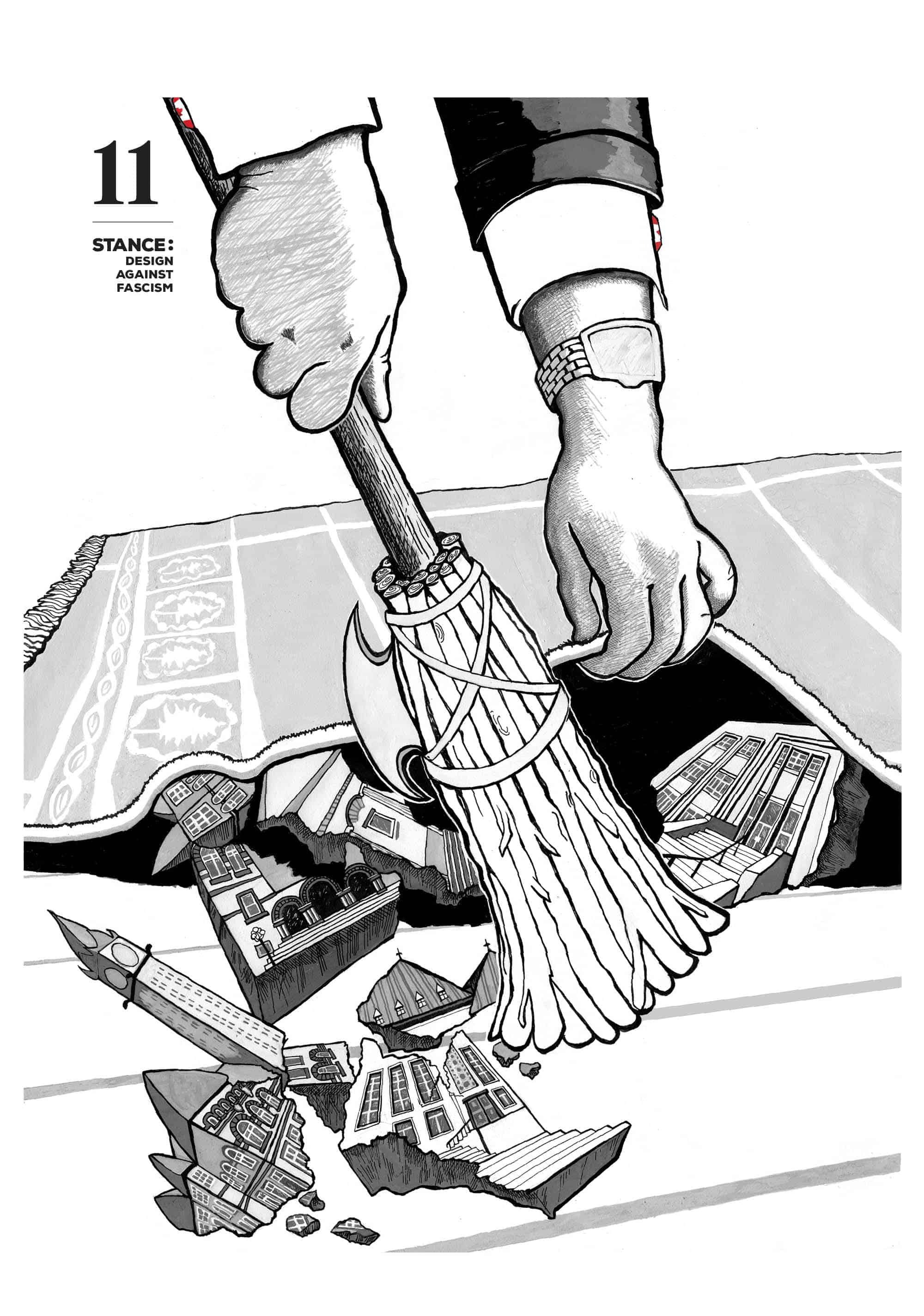 Lara Lucretia is a Toronto-based illustrator, gardener, educator and printmaker. She is one of nine artists exhibiting their work as part of STANCE: Design Against Fascism in partnership with Mayworks Festival of Working People and the Arts. The exhibit deals with themes relevant to marginalized and under-represented communities in Canada—reinterpreting the 1973 Chilean poster art exhibition Por la Vida…Siempre! (For Life…Always!). It brings current societal challenges (e.g., polarization, radicalization, the rise of white nationalism and fascist tactics) to the foreground. 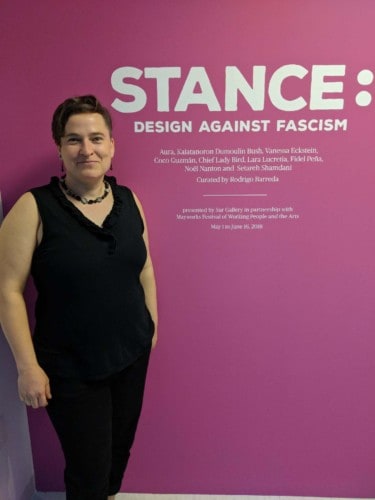 SDTC: How’d you get to where you are now in your artistic practice?

LL: I’m pretty much self-taught and have learned from other artists who I’ve collaborated with. I’ve never formally studied art. I’ve spent a lot of time drawing and illustrating and making flyers for political causes. A huge part of my process of becoming a political artist was through involvement with the Beehive Design Collective–”Cross-pollinating the grassroots” with large-scale portable murals and educational posters.

Beehive really showed me the value of collaborating (and some of its challenges) and introduced me to a lot of the ideas that I still uphold on a smaller scale in my Toronto studio, Jakarundi Graphics (where I do mostly illustration and screenprinting). I do some custom illustration and design work. Teaching, skill building and community art have been important to my trajectory as an artist.

One of my favourite local community art projects was co-founding the Upwards Art Collective. We wanted to bring opportunities for art making to venues where it was scarce or did not otherwise exist. We started a weekly art session at some Toronto Homes For the Aged where access to art making was severely limited. So part of my art practice happens in the studio, while another part happens in the larger community.

My art has mainly existed outside of–or between–work as a community gardener and garden educator. For a long time, these two lines of work were in separate compartments. Around 2010-2011, I decided to bring together my two “heads” by making artwork about gardening. I wrote, illustrated and self-published An Illustrated Guide To Growing Food On Your Balcony. I think 12,000 copies are distributed to date and the book covered its own costs, so to me, it’s been a great success. I’m now working on a new series of (hopefully 101!) plant illustrations for my new and forthcoming book. 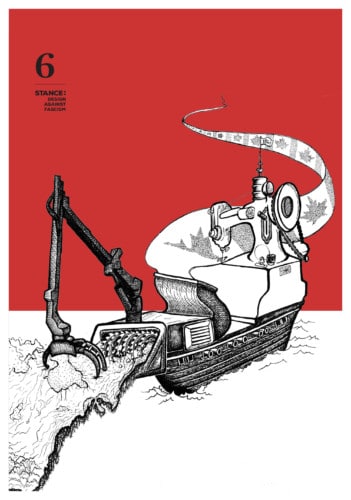 Overall I’ve been into learning new printing techniques and wanting to expand and make new collaborations around Toronto. I continue to print mainly posters. I’m still illustrating and screenprinting and in recent years I’ve been learning more block printing. It’s partly because of wanting to avoid the chemicals in photo emulsion for screenprinting. So far I’ve been printing without a press and just getting familiar with the materials and the medium.

One highlight of recent years was the opportunity to work with Rocky Tobey in 2013, a local metal worker who had been part of a creative process with the CounterFit harm reduction group at South Riverdale Community Health Centre. CounterFit was using art to bring people together for healing in the community in response to the rising number of drug overdose deaths. Rocky came in as a metal worker to design a large-scale permanent memorial for people who use drugs.

Its creation was a community process that dozens of people took part in. The final work is an eight-foot-tall copper flame (near Queen and Carlaw), engraved with memorial messages and artwork. Co-facilitating some of the creative process was amazing because it was such a transformative way to use visual art–collective, public artwork for a healing purpose, with a social and political message as well. For me, art is political and personal.

Why are community engagement and skill-sharing important to you?

Well, whether it’s graphics or gardens, I’m more interested in doing things collaboratively than individually. Both gardening and art making are powerful tools for bringing people together, teaching and learning from each other, and building skills for transformation and social change. Art for art’s sake or art for decoration just doesn’t get my attention as much as art with a social purpose. 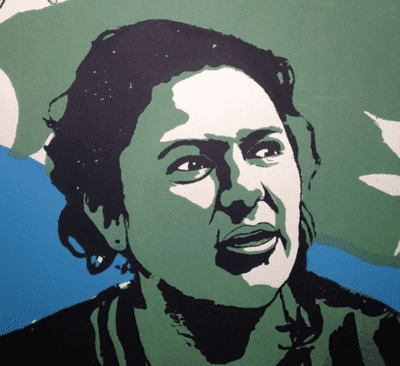 Can you explain a bit about what anti-copyright imagery is, and why you are passionate about it?

The whole idea of anti-copyright, when it comes to graphics, is to create and distribute artwork that you WANT others to copy and reproduce and disseminate. I love this idea because I think art with a social and political message is doing itself a disservice if it is limited by copyrights and permissions.

Legally, there’s no such thing as anti-copyright, but groups like Creative Commons have made more detailed licensing and terms for this kind of work, like “Non-Commercial, Attribution, Share-Alike” (which I often put on my work). It basically means that work can be reproduced for non-commercial purposes as long as it is attributed to the original author and shared under the same Creative Commons terms.

The Beehive Design Collective got me really excited about anti-copyright as well as the studio Grafica De Lucha (a mobile print shop that is usually based in Mexico), which produces a lot of anonymous and anti-copyright graphics for social movements.

The “Attribution” piece can be tricky because often work gets reproduced without identifying where it came from. In some ways, I think that’s something you have to be prepared for in making anti-copyright graphics. Some artists, like those at Grafica de Lucha, make the work anonymously to begin with, to encourage sharing and reproduction and distribution. 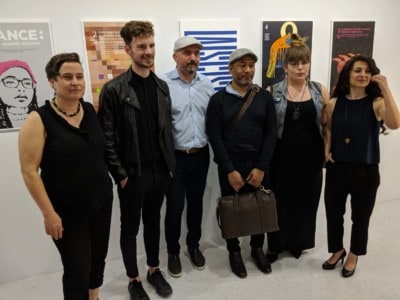 There are so many of us who are already paying attention but not taking any action. I think that people in Toronto should pay attention to the Soaring Eagles encampment outside Old City Hall that has been set up for sixty days now (as of May 1) to demand justice for the murders of Colton Boushie and Tina Fontaine. Stop talking about Trump all the time and put some effort into fixing social problems closer to home.

What can audience expect from your exhibit at STANCE?

STANCE is an exhibit of old and new political posters: historic artwork about fascism from 1973 in Chile and new artwork by nine Toronto artists. So it’s a group show where you will find a fresh and current take on fascism by local artists. Expect to find a diversity of compelling artwork!

STANCE is on now until June 16th at Sur Gallery (39 Queen’s Quay E). This Saturday, they’re hosting a talk feat. Sheila Sampath in conversation with curator Rodrigo Barreda and participating designers about the processes in conceiving and creating the exhibition. Get more information here.