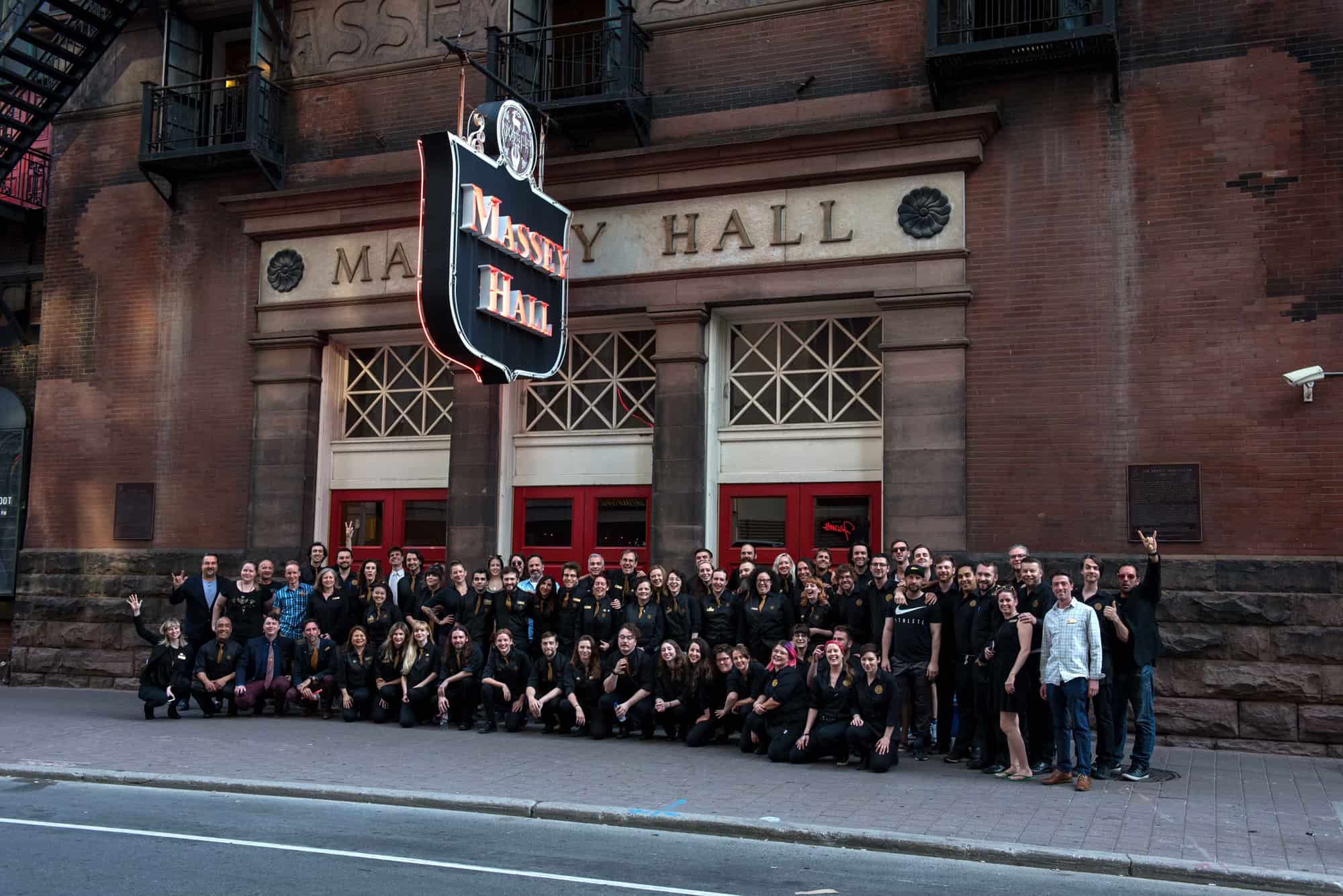 Have you ever been in a situation that just seemed near perfect? Somewhere that was so in tune and so needed? A place in time that felt like everything was alright and all was working as it should? Have you ever felt any of that with a ticking clock above your head, a constant reminder that the days were winding down and it would soon come to an end? Knowing this, you strived and panicked to savour it all, to take it all in. You took as many photos as you could, counted all the breaths and steps you took in that place, and made every word you said something of importance.

This is what the staff experienced in the final days of Massey Hall, before the doors shut for a few years to give the Grand Old Lady a facelift. I wish I were exaggerating, because it all seems so dramatic, but it’s the truth. With every article that was written about Massey Hall shutting its doors and every radio DJ talking about their favourite show that took place there, it was just a reminder that our days were numbered; one of the best things we had was going to end.

Everyone who worked at Massey Hall (it doesn’t matter if they were there for twenty years or eight months) felt the magic the Old Lady possessed. That might be why so many people I worked with are together in loving relationships. That might be why even I, a lady who is perpetually single, was able to have a relationship with a co-worker. It didn’t last, but it happened.

Anyone who knows me has heard me refer to the staff as the Island of Misfit Toys, and there is no better description. We were artists and weirdos, somewhat awkward but still able to make awkward look cool. To be in that environment was to be accepted for your flaws and all; you were among like-minded people. We all knew it and enjoyed each other for it.

One of my favourite memories was the first of two nights Diana Krall was playing, her piano tech was on stage doing some final sound checks while we sat in the seats waiting for doors to open. All of a sudden, Elvis Costello (married to Krall) walked on stage with their son and began to teach him “Seven Nation Army” on one of the keyboards. When they were finished, all of the staff in the venue clapped. Costello, surprised anyone was even watching, very sheepishly looked up and gave a quick smile and wave.

Another favourite moment was during Neil Young’s acceptance speech when he was inducted into the Canadian Songwriters Hall of Fame. While speaking of the upcoming renovations, he simply said, “Don’t fuck it up,” and I think he took the words right out of our mouths.

Massey Hall is a place of tremendous history and history yet to be made. It is a place that, for over a century, people have come to learn, be entertained and make change. Walking those halls and staircases night after night, all of that was not lost, especially if you encountered the Ghost of Massey. It is a place of mystery and that mysterious quality got into the veins of all who worked there. It makes no sense how so many different people came together to give the audience the best experience while also having the best time themselves. It makes no sense that I can call forty people my friends and know they have my back and I have theirs. Community like this doesn’t happen often, especially at work.

We were all so lucky to live in that moment; we were lucky to go to the Imperial or the Firkin for a drink and simply let the servers know we worked at Massey Hall and know we were taken care of by the staff there. We were so lucky to spend hundreds of nights with strangers who were so grateful to be there and who themselves were living in a moment they would look back at with joy. I often wondered what the health benefits were to hearing screams of excitement and applause over and over. It must offer up something pretty good for the soul.

Now the doors are closed and we have all moved on to different jobs and different paths. A few days after the last show, the staff was invited to a closing party at Massey Hall, where many of my talented co-workers were able to take the stage and play their own songs. It was the best send-off we could give the old gal. We paid our respects while we drank and sang.

After all the bands were done, most of us ran on stage for a sing-a-long, belting out “Stand by Me” and “Leaving on a Jet Plane” (I’m not sure if any two songs could have been more appropriate). Then for one final bow before curtain call, my good friend Kaleb, also known as The Sun Harmonic, did a bare bones, acoustic version of the song he wrote for our home, “The Grand Old Lady Sails Away.” Listen to the live recording, the last song to be performed on the Massey Hall stage before she shut her eyes.