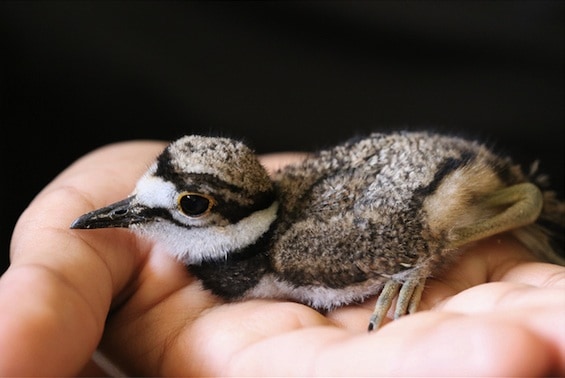 Lessons on Grief from Momma Killdeer

Initially, I wasn’t going to write about Momma Killdeer; however, she’s been playing on my mind a lot.

My current job has allowed me to get more acquainted with nature, and I’ve started paying attention to things I would have previously overlooked. I’ve developed a sincere appreciation for all the critters I’ve come into contact with: raccoons, rabbits, and even the birds. Truth be told, I’m the sneaky Midnight Feeder who brings in loaves of bread (don’t tell my boss).

About two months ago, my coworkers and I discovered a nest in the most bizarre spot – the middle of a busy field, completely out in the open. We set up pylons around it, and made daily rounds to check in. Eventually, I learned the tiny nest that housed three tiny eggs were laid by a Killdeer. I was ecstatic when I spotted the Momma situated on the ground nearby. As I started to walk over, she noticed me, rolled onto her side, bent her wing in the air, and started screeching and flailing around. I panicked and went into bird rehabilitation mode. I immediately started trying to figure out the mechanics of an avian splint, when my coworker came over to me, put his hand on my shoulder and said, “Relax, she’s just protecting her babies.” After aggressively labelling him a monster and voicing that this was an emergency and we needed to take her to a hospital, he explained to me that the Killdeer’s instincts are to lure you away from their nest by depicting themselves as weak and wounded prey. I didn’t believe him until I noticed that she would get up from where she was, walk a few feet, look back at us, and display the same injured characteristics that I had initially been concerned about.

I was captivated. I started to walk in the opposite direction, and as I looked back I saw her get back up and walk over to her babies and sit down next to them. I was obsessed with her. I had to share this with someone. I took out my phone, dialed and when I heard the pickup, I yelled, “I JUST WATCHED THE BEST MOTHER I HAVE EVER SEEN TAKING CARE OF HER BABIES.” I probably should have explained the backstory before making such an overtly offensive statement to my own mother, but after I explained it we both agreed that animal instincts are extraordinary.

Because of this new job, I had to change my entire life to adapt to an overnight schedule. At that point in time, I had been unfocused and going through some things that I was having a tough time with. I was so impressed with my new little bird friend (who wanted nothing to do with me), that I looked forward every day to checking on her, leaving her food and telling her what a good job she was doing. “This is for you and your egg babies,” I would gently explain each day. Never mind that they probably weren’t going to bust through that shell anytime soon to eat half of my sammy; in my head I was nurturing my new delicate family.

Now, I feel like I have to put a disclaimer here. This is the sensitive part of my story that I had been struggling with. One morning, before my shift started, I walked over to my familiar spot and the nest was gone; so were the eggs. There were fragments of shells scattered nearby, and my eyes immediately welled up. I understand and respect the circle of life, but it’s still not a comforting reality, especially when you have an emotional connection to the well being of these living things. The mother was nearby and was just pacing back and forth. My heart broke. I watched this behaviour for the next two days, when I would quietly walk over and feed Momma Killdeer part of my sandwich. Every single time it would bring me to tears. I would see her treading back and forth, and I would softly put down some food for her and tell her she was a good Momma.

On the third day, I noticed she had changed locations. She was in area of the field doing her bird thing, and somehow seemed okay. (That sounds absurd, but that’s how she appeared.) She was eating and chirping, and somehow this scene, even more than before, made my heart feel like it was going to burst. This fragile bird had allowed itself to grieve for two days, and then give herself no other choice but to carry on.

There have been a lot of things over the years that I had been holding onto, and have not forgiven myself for, that my grief felt as though it had taken on a physical weight. And somehow, this bird, one of many that we see every single day, had allowed itself two days to mourn something so important to her, and then she kept going. Internally she might have been still grieving, but regardless, she was a little bird solider and Jesus – good for her.

This may seem dramatic and silly to some, but for me I know I’ll always remember Momma Killdeer; to me it was far too significant to allow it to pass without acknowledging it. She reminded me to allow myself to feel grief, deal with it however I need to, and then carry on. No matter how weak or how breakable you think you are, there is a whole lot of strength in everything that has a heartbeat.

Tragedy will happen, and hurt is inevitable, but in the end there is no other option than to have a tiny sandwich, and just keep going.