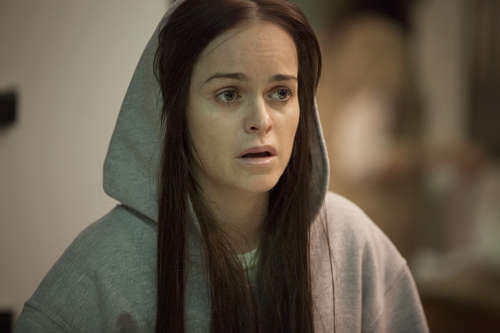 Lessons on Sex and Relationships from Orange Is The New Black

Warning: This article contains spoilers about the new season of Orange Is The New Black. Either turn back now or don’t say I didn’t warn you!

On this season of Orange is the New Black, we are treated to a whole new side of Tiffany Doggett aka Pennsatucky. The once homophobic bible-thumping meth head has transformed into a welcoming, likable character that has sprouted an unlikely friendship with Big Boo.

We get a more in-depth look at Tiffany’s back-story. In her first flashback, we see a ten-year-old Tiffany going to her mother convinced that she’s dying. Her mother groans and explains that it’s just her body changing and then gives her a short, pessimistic sex talk. Explaining that boys will now want things from Tiffany, her mother suggests that she just let them get it over with and treat it like a bee sting. “If you’re lucky, they’ll be quick like your daddy, just in and out,” her mom says, indicating that Tiffany shouldn’t expect anything more from sex.

In the next flashback, we see how this attitude is working out for Tiff. She regularly trades sex for a case of Mountain Dew, like a living episode of Maury. As a fellow teenager humps Tiff from behind, the bored expression on her face suggests that if she’s going to have sex, she can at least get some of her favourite pop out of the deal.

Later on, Tiffany meets Nathan, a boy who has just moved to town. He’s immediately smitten with her and asks her out to the movies. When she asks what he wants out of it, we see just how deeply Tiffany is ingrained with the idea that all sex is transactional. Thankfully, Nathan is different. He enjoys Tiffany for who she is and when they do finally have sex, he moves slowly, touching her in a way that results in what is clearly her first orgasm. This is where everything changes. For the first time in her life, Tiffany understands that sex can be an enjoyable, respectful experience that’s shared by both parties.

In a sad way, I think that Tiffany’s experience might be relatable to a lot of women. I’m not saying that most girls experience that level of abuse and degradation, but we’re not taught to value our own satisfaction when it comes to sex. We’re continually fed myths about orgasm through penetration only (no, just no) and made to believe that sex only ends when the man ejaculates. As a result, we end up in a power play that extends to other areas of our relationships and where, somehow, the man always comes out on top. Watching Tiffany and Nathan together is refreshing, as we see how sex can be a fulfilling and enriching part of a relationship rather than an act that one endures.

This isn’t to say that if your boyfriend can’t get you off he doesn’t care about you. What’s important is having a partner who tries and, most of all, is concerned about your pleasure.

The important thing is to not go through life feeling like a human Fleshlight, whose only purpose is to facilitate some dude’s orgasm. Sex shouldn’t just be a pleasurable experience; it should be gratifying, mind-blowing and hell, downright spiritual at times. As Tiffany learns, every woman deserves to have a partner that is loving, caring and generous.